The most important fields of today, research which have potential economic value and prospects for commercialization are cell and tissue culture based production of vaccines, monoclonal antibodies, pharmaceutical drugs, cancer research etc. Now-a-days several valuable products of medical use have been produced through animal cell culture or genetically engineered cells.

The term tissue culture refers to the culture of whole organs, tissue fragments as well as dispersed cells on a suitable medium. Cell cultures are obtained either by enzymatic or mechanical dispersal of tissues into individual cells or by spontaneous migration of cells from an explant.

Freshly isolated cell cultures are called primary cultures. They are usually heterogeneous and slow growing, but are more representative of the tissue of their origin both in cell type and properties. Once a primary culture is sub-cultured, it gives rise to cell lines which may either die after several subcultures (finite cell lines) or may continue to grow indefinitely (continuous cell lines). Normal tissues give rise to finite cell lines, while tumours give rise to continuous cell lines.

In 1913, Carrel developed a complicated methodology for maintaining cultures free from contamination, especially by bacteria. Subsequently, suitable culture media were developed and the techniques of cell culture were refined.

3. Microroom for carrying out microscopic work,

There are many types of vertebrate cells that require support for their growth in vitro otherwise they will not grow properly. Such cells are called anchorage dependent cells. A large number of substrates which may be adhesive (e.g. plastic, glass, palladium, metallic surfaces etc.) or non adhesive (e.g. Agar, Agarose, etc.) types may be used.

Plastic wares are non autoclavable, are supplied sterile and are for a single use, polystyrene is the most commonly used, but polyethylene, polycarbonate, Perspex, PVC, Teflon, cellophane and cellulose are all suitable substrates.

(ii) Glass as a Substrate:

Both stainless steel and titanium are suitable substrates, since they are relatively chemically inert and negatively charged. The proper grade of stainless steel must be chosen to avoid release of toxic ions and it should be acid washed to remove surface impurities etc.

To increase the efficiency of cultured cells through increased cell attachment, the surface of the substrates is treated with purified fibronectin or collagen. The chemical is poured on to the surface of dish, excess amount drained, chemical is dried and sterilized by using UV light. In addition, the surface of substrates is also treated with monolayer of special cells which is called feeder layer because of cells. The special cells are used as feeder layer, chemical foetal, intestine, mouse embryo fibroblast, etc.

4. Culture of Animal Cell and Tissue:

Culture of animal cells and tissue is rather more difficult than that of microorganisms and plants because the latter synthesize certain chemical constituents (unlike microbes).

There are two types of media used for culture of animal cell and tissue:

(A) The natural media and

Natural media are the natural sources of nutrient sufficient for growth and proliferation of animal cells and tissue.

These are of three types:

The most commonly used clots are plasma clots which have been in use for a long time. Plasma is now commercially available either in liquid or lyophilized state. It may also be prepared in the laboratory usually from the blood of male fowl.

Chick embryo extract is most commonly used but bovine embryo extract is also used. Others are spleen, liver, bone marrow, leucocytes etc. Tissue extracts can often be substituted by a mixture of amino acids and certain other organic compounds. For cell cultures, artificial media with or without serum are used.

Synthetic media are of two types: 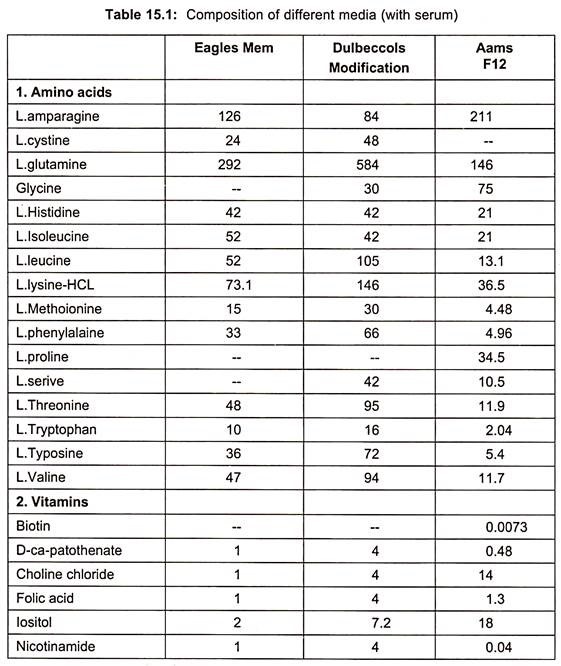 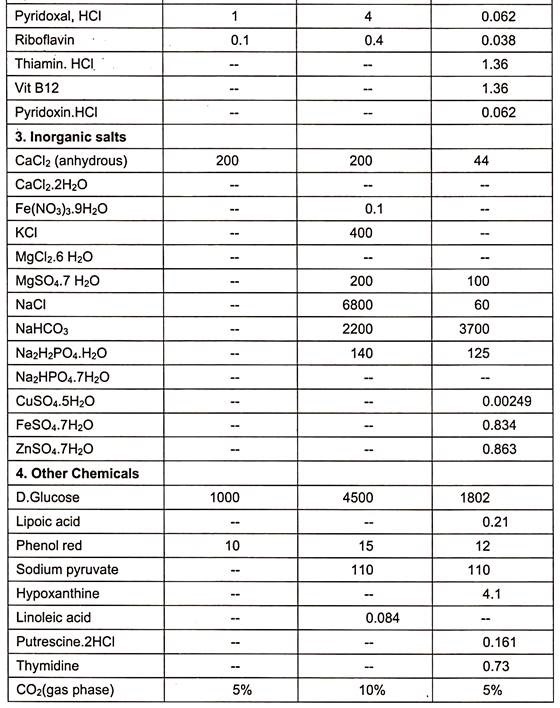 When synthetic media are devoid of serum in culture medium, it is called serum free media. Examples are given in table. (Table 15.1)

Serum itself has several disadvantages as:

1. It deteriorates within a year and differs with batches.

2. A number of batches are required if more than one cell types are used, which makes difficult for maintaining and co-culturing of cells.

4. It is not chemically defined and therefore, it is of variable composition.

5. It may be source of contamination by viruses, mycoplasma, prions etc.

6. It is most expensive ingredients of the culture media.

However, it has some advantages such as:

2. It binds and neutralizes toxins.

5. It provides trace elements and other nutrients.

Following an appropriate protocol developed to avoid contamination and retain cell survival. In general embryos and other contents of uterus are free from contamination, while in adult tissues bacterial contamination may be common. In simple terms, the site of opening is sterilized with 70% alcohol, tissues are removed and placed in balanced salt solutions EBSS or HBSS, supplemented with antibiotics.

Cell culture are started from disaggregated explants occasionally, cells do migrate out of the culture whole tissues- such cells are separated by trypsin or other enzymatic treatment to establish cell cultures.

There are two ways of disaggregation:

Tissue is chopped into small pieces approximately 1 mm in size. They are then cultured into a suitable vessel. The pieces attach to the substrate either due to their own adhesiveness, the dish may be scratched to facilitate attachment or clotted plasma may be used. Cells grow out from the tissue pieces which are typsinized and subcultured. The explants themselves may be retained in the same dish or transferred to a new vessel to obtain further cell growth.

Trypsin and collagenase are the most commonly used enzymes, but other enzymes like elastase, mucus, papain etc. have also been used. Dissociated cells are collected, washed free of the enzyme and cultured. The trypsin and collagenase solutions are generally prepared in a balanced salt solution.

When mechanically or enzymatically disaggregated tissue pieces or cells are cultured, they attach to the substrate and a monolayer of cells develops from them. These cultures are called primary cultures. Primary cultures do not contain many types of cells present in the tissue because they are unable to attach to the substrate and survive. The dead cells are easily eliminated when the medium is poured and subcultured.

After a period of time, the available subculture becomes occupied by the monolayer cells. Then they inoculated or seeded into a fresh vessel from the primary cultures. The cultures obtained by this method are called cell lines. The process of inoculating cultured cells into fresh culture vessels is termed as subculturing.

There are many types of animal cells that can grow in vitro such as tumour cells, pigmented melanoma cells, steroid producing adrenal cells, growth hormone prolactin secreting cells, teratoma cells capable of differentiating in artificial conditions, pigmented or cartilage cells etc. On the basis of purpose of experiment a continuous (immortal) cell line can be developed from cultured tissues (Fig. 15.7). It is not necessary that the cells which are plated into cultured medium will start immediate growth. 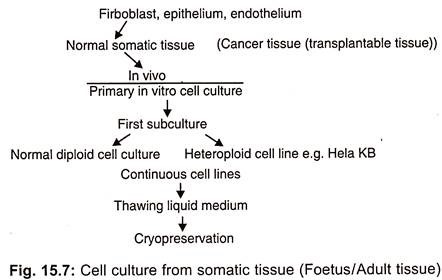 On the basis of growth responses, culture cells are divided into 3 types:

2. Undifferentiated but committed cells, and

(i) Evolution of Cell Lines:

The mixture of cells in single suspension may be used as a primary culture or starter culture. The primary culture is sub-cultured in special growth nutrients at optimal growth conditions. Consequently, some cells attach to the surface and proliferate to yield single cell line, in spite of being damaged in suspension. So while sub culturing the suspension, should be diluted with fresh medium at certain ratio and transferred into a flask.

The primary culture becomes a cell line only after its first subculture. The subculture is needed when the nutrients present in medium for cell growth diminish. These may be sub-cultured several times on the fresh medium and propagated accordingly. By doing so a continuous growth of cells is maintained. This results in multiple copies of a single type of cell with a negligible amount of non-proliferating cells.

During the course of repeated subculture and selection the cell line gets evolved and properly established consisting of rapidly proliferating cells. Thus unaltered form of cell line is called continuous cell line which propagates in logarithmic way.

A cell line consists of several similar or dissimilar lineages. A defined cell lineage having specific properties is called cell strain. On the basis of life span of culture, the cell line or cell strains in a gas or finite.

The scaling up of cell cultures may be done as:

Monolayer cultures are essential for anchorage dependent cells. Scaling up of such cultures is based on increasing the available surface area or by using plates, spirals, ceramics and micro-carriers.

In scaling up both chemical and physical factors have to be optimized for good results. The medium must be suitably stirred to keep the cells in suspension and to make the culture homogeneous. The objective of stirring is to achieve good mixing without causing damage to cells. It is important to supply sufficient O2 without damaging the cells.

The reactors used for large scale suspension cultures are of 3 main types:

ii. Stability and longevity of cultures,

iii. Is applicable to both suspension and monolayer cultures,

iv. Many systems protect the cells from shear forces due to medium flow,

Different organs of animals can be cultured on artificial medium. For organ culture care should be taken to handle in such a way that tissues should not be damaged.

Two types of culture media are used for organ culture:

Natural sources of nutrient sufficient for growth and proliferation of animal cells or tissues.

They are of three types:

Prepared artificially by adding several nutrients, vitamins, salts, O2 gas phases, serum proteins, carbohydrates, cofactors etc. However, different types of synthetic media may be prepared for variety of cells or tissues to be cultured. It is more easy to culture embryonic organs than the adult animals.

Embryonic organs can be cultured by applying any one of the following four methods:

(a) Organ Culture on Plasma Clots:

(b) Organ Culture on Agar:

Solidified culture medium with agar is also used for organ culture. The nutrient agar medium may or may not contain serum. When agar is used in medium, no extra mechanical support is required. Agar does not allow to liquefy the support. The tumours obtained from adults fail to survive on agar media, whereas embryonic organs grow well. The media consists of ingredients- agar, chick embryo extracts and horse serum in the ratio of 7:3:3.

The liquid medium consists of all the ingredients except agar. When liquid media are used for organ culture, generally perforated metal gauze or cellulose acetate or raft of glens paper is used.

For embryo culture, a suitable medium prepared is poured in to watch glasses, which are then placed on moist absorbent cotton wool pad in petri dishes. In case of chick embryo, the eggs are incubated at 38°C for 40-42 hours so that a dozen of embryos could be produced. The egg shell sterilized with 70% ethanol is broken into pieces and transferred into 50 ml of BSS.

The vitelline membrane covering the blastoderm is removed and kept in petri dish containing BSS. Vitelline membrane is removed with the help of forceps. Developmental stage of blastoderm could be found when the embryo is observed under microscope. Blastoderm is placed on the medium in watch glass placed on sterile absorbent cotton wool pad in petri dishes. Excess of BSS is removed from medium and embryo culture of chick is incubated at 37.5°C for further development.