In this article we will discuss about the Fate Map of an Egg:- 1. Meaning of Fate Map 2. Construction of Fate Map 3. Vertebrates 4. Usefulness.

A fate map is a diagram of an egg or blastula, indicating the fate of each cell or region, at a later stage of development. Fate maps are essential tool in most embryological experiments. They provide researchers with information on which portions of the embryo will normally become which larval or adult structure. The analysis of the fate of each blasto­mere after first and second cleavage is called cytogeny or cell lineage study.

Fate map of different types of animals have been constructed by the following methods:

In some invertebrates, the embryos being transparent and having relatively few daughter cells that remain close to one another, it has been pos­sible to look through the microscope and trace the descendants of a particular cell to the organ they subsequently formed.

This type of study was performed by Edwin G. Conklin (1905) in the tunicate, Styela partita, where the different cells contain different pigments. As for example, the muscle-forming cells always have a yellow colour.

Most embryos, however, do not have the facilities (trans­parent, few cells, different colours etc.) as described above in Styela partita. It was in 1929 that Vogt was able to trace the fate of different areas of amphibian eggs by apply­ing vital dyes. These vital dyes stain the cells without killing them.

A variation of the dye marking technique is to make one area of the embryo radioactive. A donor embryo is taken and grown in a solution containing radioactive thymidine. This thymidine base is subse­quently incorporated into the DNA of the dividing embryo.

A second embryo, acting as the host embryo, is grown under normal con­ditions. The region of interest is cut off from the host embryo and is replaced by a radioac­tive graft from the donor embryo. The cells that are radioactive will be the descendants of the cells of the graft, and are distinguished by autoradiography.

Radioactive and vital dye marking have their own drawbacks such as dilution over many cell divisions and the laborious preparation of slides. One per­manent way of cell marking is to create mosaic embryos having different genetic constitutions. The best example of such a marking is to graft quail cells inside a chick embryo. By doing so, fine-structure maps of the chick brain and skeletal system can be made.

i. Fate Map of Amphioxus:

The fate map of Amphioxus can be traced at an early stage prior to the onset of cleavage. The pre­sumptive organ forming areas in the un-cleaved egg is given in Fig. 5.32. The future endodermal cells lie at the vegetal pole and would subsequently form the floor or hypoblast of the blastula. The area at the animal pole would form the presumptive ectodermal cells. 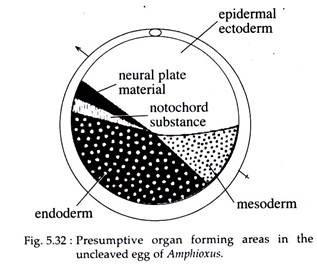 The blastula of Xenopus at the 32 cell stage gives no indica­tion as to how the different regions will develop. However, by following the fate of individual cell, or group of cells, the fate map of the blastula can be made. One way of making the fate map is by staining the vari­ous parts of the early embryo with a lipophilic dye such as dil and observe where the labelled regions end up.

Another sophis­ticated way of labelling the blastomeres is by injection of high molecular weight molecules such as rhodamine-labelled dextran, which cannot pass through cell membrane and are, therefore, restricted to the injected cell and its progeny. These cells can be easily detected later, under a UV microscope.

The fate map of the Xenopus blastula (Fig. 5.33) shows the presence of yolky macromeres at the vegetal pole which gives rise to the endoderm. Depending upon the position of the blastopore, the endodermal area can be divided into the sub-blastoporal and supra-blastoporal endoderm.

The mesoderm becomes subdivided along the dorsoventral axis of the blastula. The most dorsal mesoderm gives rise to the notochord. From this ventrally, the- meso­derm is differentiated by the somites (which gives rise to muscle tissue), lateral plate (which contains heart and kidney mesoderm) and blood islands.

In Xenopus, a thin outer layer of pre­sumptive endoderm overlies the presump­tive mesoderm in the marginal zone (Fig. 5.33C).

Recent studies with cell adhesion molecules (CAMs), it has become possible to construct the fate map of chick epiblast (Fig. 5.34). All the three germ layers of the embryo proper is formed by the epiblastic cells. The epiblast also forms a considerable amount of extra-embryonic (mesoderm) membrane. 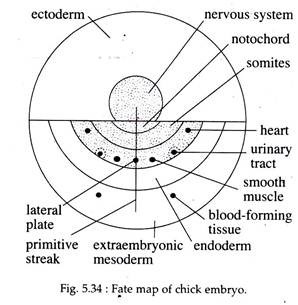 The fate map of chick (Fig. 5.34) reveals that the cells of the epiblast are organised around the notochord and nervous system. The neural ectoderm is present as a knob-like structure facing towards the anterior side. The cells at the anterior part of the epiblast form the ectoderm, while the cells at the pos­terior side gives rise to mesoderm (body proper), endoderm and extra-embryonic mesoderm.

The fate map of organisms is helpful in tracing the morphogenetic movements of the cells and the ultimate positions they take up. However, they tell us nothing about the tissue developmental potentialities during morphogenesis.