The below mentioned article explains about the osmosis and diffusion with the help of suitable diagrams.

Molecules in a matter are in constant motion. The movement is a manifestation of the kinetic energy in the molecules. The molecules tend to disperse in a straight line but the direction of movement at any particular moment is unpredictable, because its direction depends on its chance collision with other molecules or the wall of the con­tainer (Fig. 4.2).

This retards the rate of movement of the molecules but facilitates the even distribution of the substance in a short period. 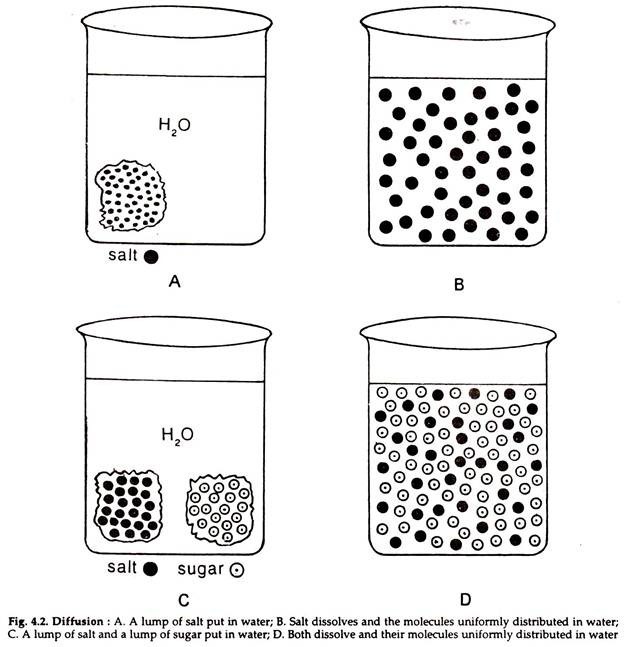 The diffusion of water or a solvent or solute through a semipermeable membrane is osmosis (Gr. osmes = action of pushing). It is passive. When a solution of salt or sugar is separated from water by a semipermeable membrane that allows only the water (small molecules) to pass but not the large mole­cules of sugar or salt, the movement will be one way, i.e. the water molecules will pass to the solution (Fig. 4.3).

The water molecules diffuse from higher (pure water) to lower concentration (solution). A reverse movement also occurs but at a much slow rate. As a result, the level of the solution rises till an equilibrium is reached, i.e. the weight of the solution exerts a hydrostatic pressure just equal to the pressure of water to enter the solution.

The pressure exerted by the water column is called osmotic pressure. Substances dissolved in the intracellular fluid exerts osmotic pressure on the interstitial fluid and vice versa. When the two processes are equal, there is no entry or exit of water from the cell.

A solution in which a cell neither shrinks nor swells, such a solution is called iso-osmotic or isotonic with the intracellular fluid of the cell.

A cell placed in a solution containing less dissolved substances than in the intracellular fluid, swells as the water from the solution moves into the cell. Such a solution is called hypo-osmotic to the cell. Erythrocyte is an ideal material for de­monstration of osmosis.

Plasma membrane of R.B.C. is permeable to water but seemingly impermeable to salts. 160 milimolar NaCl solution is iso-osmotic with plasma. If the R.B.C. is placed in a more concentrated (hyperosmotic) solution, water moves out of the cell and the cell shrinks; in iso-osmotic solution water does not move in any way and the cell retains its shape; in a more dilute (hypo-osmotic) solution, the water enters the cell and it swells; water enters the cell when placed in pure water, the cell swells and bursts.