African ostrich (Struthio) (Fig. 28.1) is represented by at least 4 species occurring naturally in arid regions of Africa and Arabia. It is the largest living bird attaining a height of more than 2.4 metres and a weight of 150 kg. Feathers are without aftershaft. Wings are small and nearly kept folded during running, but may be expanded to work as a brake or steering. 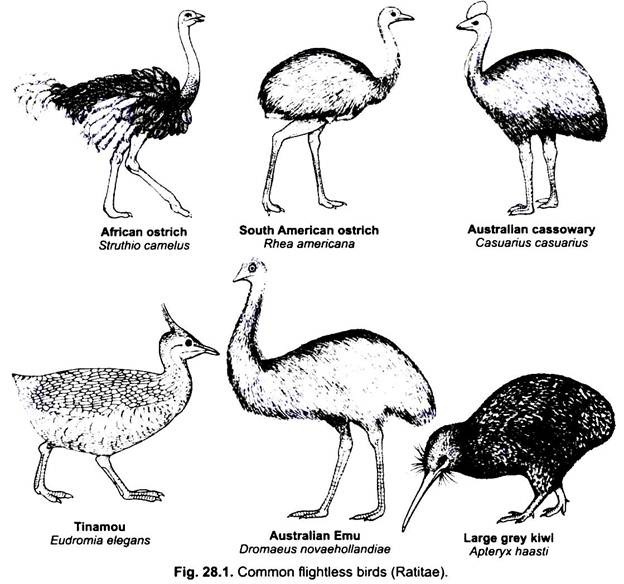 Head is small with a broad beak, neck is long, body is heavy, and tail is short. Head, neck and legs are sparsely feathered. The skin is so thick that it can be made into leather, curly feathers do not lie in pterylae. Two wing fingers are clawed which are used for defence. Tail feathers are replaced by long tail coverts.

Hindlimbs are long and powerful, they kick very hard and are not covered by feathers. Only the 3rd and 4th toes are present bearing stunted nails, the 3rd toe is larger and clawed. Thus, ostrich is a flightless but very swift running bird. Male and female birds differ in the colour of their plumage.

The tail and wing feathers are white, while the rest are black in the male. Female is clad in a sombre brownish livery. The long sturdy legs are admirably suited to match the speed of zebras and antelopes in whose company it feeds. It can run at a speed of 80 kilometres per hour, covering more than 8 metres in a single stride. Both beak and feet serve as weapons of defence.

Two beaks are more or less round and enclose a broad space. Prominent eyes have lashes on the upper eyelid. The food consists chiefly of herbage including seeds and fruits. Contrary to popular belief, an ostrich does not hide its head in sand when in danger. Ostriches travel about in groups. They are polygamous as one male attends several females. The male has a single solid penis which can be retracted into a pouch of the cloaca.

Female has a clitoris. They lay large eggs in depressions of sand which are incubated by both parents. The young ones run about as soon as they are hatched. The egg of the ostrich is very large and next in size to that of mackerel shark. Each egg weighs nearly 1.5 kg and requires 50 minutes to boil it.

Ostrich meat is coarse and of little use for food. The feathers of adult bird are used by women as decorative plumes. Ostriches are easily domesticated and there are a number of ostrich farms in Africa and United States.

Rhea (Fig. 28.1) is represented by 3 species found in the plains or pampas of South America. It is commonly known as South American Ostrich. It is not a true ostrich. They live in groups. It is smaller about 1.5 metres than the true or old world ostrich (Struthio) but the habits are quite similar. Wings are rudimentary but better developed than in ostrich. The hindlimbs are powerful with three digits (second to fourth) having claws.

It has neither distinct tail feathers nor showy wing plumes like that of the African ostrich, no aftershaft. Its head and neck are feathered, not naked as in ostrich. Beak flat and broad. Rheas are very fond of bathing and are even able to swim. Food varies from vegetable products to insects.

The male is polygamous. During breeding season, the males select and segregate with 3-7 females to form a harem. The nest is dug by the male and all the females use to lay eggs in the same nest. Nearly 50 eggs are laid in a season and male incubates them. Freshly laid eggs are lemon yellow in colour and hatching requires 40 days incubation.

Though the plumes of Rhea are of an inferior quality to those of ostrich, they are used in the manufacture of feather dusters. There are two species of Rhea, viz., Rhea americana (American Rhea) and Pteronemia pennata (Damicus Rhea).

Next to ostrich, emu (Dromaeus) (Fig. 28.1) is the largest living bird, standing more than 1.8 metre high. There are 2 species confined to Australia, inhabiting sandy plains or open forests. Emu has more slender built than an ostrich. It has a shorter neck covered with feathers. Body is covered with a drab-coloured plumage and both the sexes are similarly coloured.

All the feathers have aftershafts of equal length to the main quill. There are no large decorative plumes in the male’s tail. There is a remarkable tracheal pouch connected by a slit with the windpipe, and only fully developed in the adults. The bird feeds on roots, fruits and herbage.

It loves bathing and swimming. Emu is monogamous. The male digs the nest and sits over the first brood of eggs. The female sits over the second brood. Number of eggs may be 15 or more and the eggs are green in colour. The period of incubation is 60 days.

The newly hatched young are strikingly stripped longitudinally, a characteristic which disappears on maturity. Emu’s skin with feathers attached is often used in making into rugs and mats. The fat of the bird is used as a lubricant. The beautiful, granulated, dark-green eggs are frequently converted into artistic ornaments. The flesh of emu is moderately good for eating.

The cassowaries (Casuarius) (Fig. 28.1) are the world’s third largest flightless birds. They live a solitary life in the dense tropical forests of Australia, New Guinea and the adjacent islands. Cassowaries are swift runners and swimmers. It is represented by about 20 species and subspecies. It may reach up to a height of 135 cm. They are shy, nocturnal and rarely seen.

Adults are black in colour which is brown in the young. The forelimbs or wings are very small and bent at the elbow. Each foot has 3 clawed toes (2, 3 and 4). The barbs of the wing feathers are in the form of long black spines, suggesting the quills of a porcupine. The rectrices are unrecognisable. The aftershaft is as long as the main shaft.

Apteryx of New Zealand (Fig. 28.1) is more commonly known by its Maori name ‘Kiwi’. It is the smallest living flightless (ratitae) bird about the size of a hen. It is characterised by reddish or greyish brown coarse hair-like feathers. It has strong backwardly situated legs with 3 toes in front and hallux behind. The toes are long and claws are curved and may be used for defence.

The wings are rudimentary and concealed by a long hair-like plumage without aftershafts. The tail is absent. The beak is elongated and narrow with nostrils at the tip, unlike other birds. Head and eyes are comparatively small. They possess a keen sense of smell than in other birds. Kiwis are found in New Zealand in damp forests.

They are nocturnal and burrowing in habit and eat insects, worms and vegetable matters. They run with great speed making wide strides. Female is larger than male. The male has a penis and female a clitoris. In proportion to the size of the body, the kiwi lays the largest eggs of any known animal. Only one white coloured egg is laid at a time. The enormous egg weighs about one-fourth as much as the parent.

Eggs are laid in tunnel-like burrows and males incubate them. The Maories of New Zealand are very fond of kiwi flesh, either roasted or boiled, while their chiefs utilised the plumage for ornamentation. In order to protect kiwi from extermination the Government of New Zealand has set aside some sanctuaries where kiwis may remain unmolested. Apteryx has three species, Apteryx australis (common brown kiwi), Apteryx hoasti (greater spotted kiwi) and. Apteryx oweni (little spotted kiwi).