The Indian breeds of cow are classified on some external characteristics and geographical distribution.

These are fast, powerful draught cattle (Fig. 9.2). Average milkers yield about 1400 kg milk/year in cattle farms and less in villages. They are found in the south-east of Runn of Kutch in Gujrat, from the south-west corner of Tharparkar district (now in Pakistan) to Ahmedabad and from Dessa in the east to Radhanpur in the west. 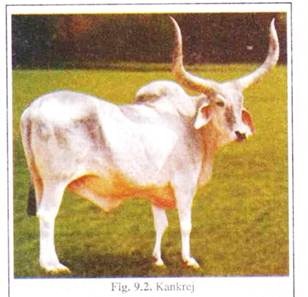 A powerful draught hybrid developed in course of over a century (Fig. 9.3). Intermediate between Kankrej (Fig. 9.2) and Hariana (Fig. 9.10) breed, Kankrej influence is dominant in its character. Very few animals of this breed are now available. The present government policy is to develop the Hariana breed. These are present in Hissar and Hansi districts. 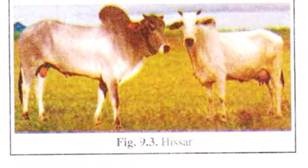 These are small, but sturdy and powerful cows. They are grey on the barrel and dark grey on the rest of the body (Fig. 9.4). These are found along the Ken River in Banda district of Uttar Pradesh and certain adjoining areas of Madhya Pradesh. 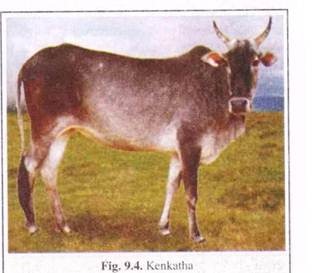 These are white cows with narrow l ace and thick upstanding horns (Fig. 9.5). Very active, good for light draught and trotting. These are prevalent in Kheri district of Uttar Pradesh. 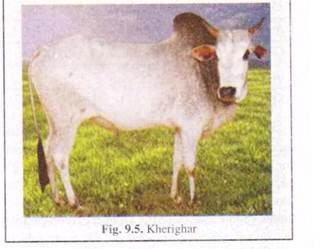 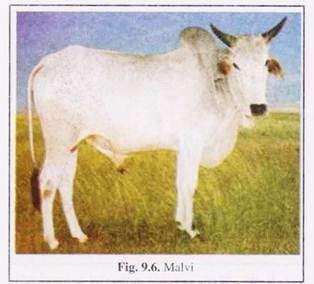 Medium-sized and compact body stature (Fig. 9.7). Good milch and draught animals. They are found in Sind (Pakistan). Kutch, Jodhpur and Jaisalmer. Though this breed belongs to Pakistan, herds of high-class animals are available in India. They yield 1800 to 2750 kg of mil kin a year in cattle farms and 1360 kg in average. 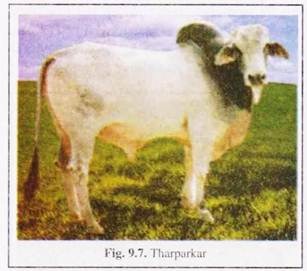 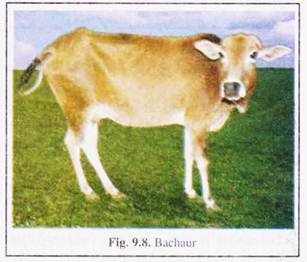 These are of medium sized, lightly built cattle. Mostly white in colour and essentially draught animals (Fig. 9.9). They are moderate milker. It is most important breed in Wardha and Chhindwara districts of Madhya Pradesh. 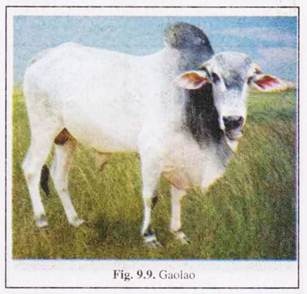 This is one of the best dual-purpose breeds (Fig. 9.10). Hariana breed are powerful work animals and good milkers. Average milk yield per year is about 1360 kg in breeding tracts and 3040 kg/ individual in cattle farms. These are prevalent in Rohtak, Hissar, Karnal and Gurgaon districts of Haryana. It is a popular breed, used extensively in other parts of India. 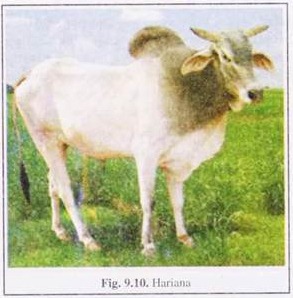 These are powerful animals but docile, suitable for heavy ploughing and carting. They are similar to Haryana breed but with traces of characters of Gir variety. Present in West Alwar and Bharatpur in Rajasthan. 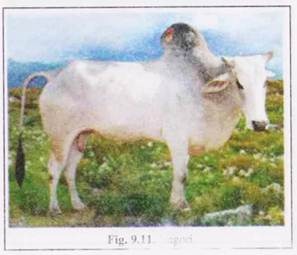 Usually found in draught area of the country. Large animals are muscular and powerful (Fig. 9.12). Valued for heavy work, but not suitable for fast trotting. In cattle farms milk yield up to 2300 kg, average about 1350 kg. Yield much less in villages. This breed is distributed in Guntur district of Andhra Pradesh. 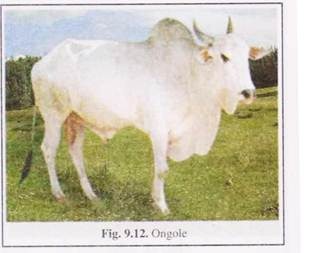 Medium sized, powerful animals ada­pted for moderately heavy plough and road work (Fig. 9.13). Probably a mixed breed of Hariana, Nagori and Mewati. These are distributed along Alwar and adjacent areas of Rajasthan. 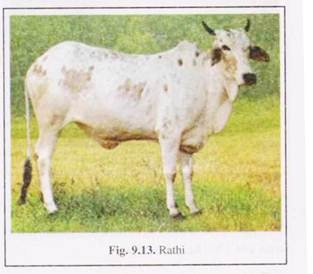 These are moderately active workers and poor milker (Fig. 9.14). These are perfectly sui­ted for areas with heavy rainfall. Distributed in small areas in Ahmednagar and Nasik districts of Maharashtra. 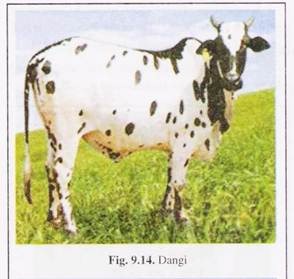 Bullocks are suitable for heavy cultivation. Well milker, best adapted in Andhra Pradesh. Black with while patches and red with white patches are common colour among the group (Fig. 9.15). They are very much related to Gir and Dangi varieties. Distributed in western Andhra Pradesh. 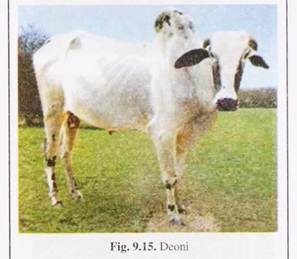 Bullocks are large and powerful, but slow and lethargic (Fig. 9.16). They are red or mottled in colour. One of the best milkers in India. In cattle farms the average milk yield is 1680 kg. Distributed in Kathiawar and Baroda areas of Gujarat, northern Maharashtra and adjoining areas of Rajasthan. 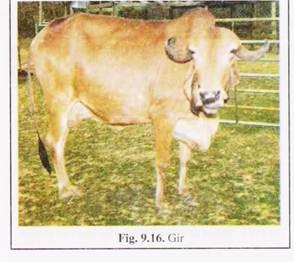 These are mainly prevalent in Pakistan. Large sized and improved herds of these breeds are also found in India (Fig. 9.17). 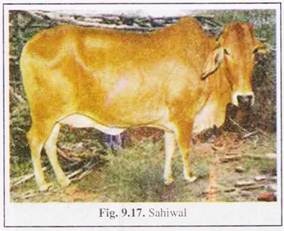 Grey-coloured animals are good draught cattle (Fig. 9.18). They are poor milkers. Found in Hassan, Mysore, and Tumkur districts of Karnataka. 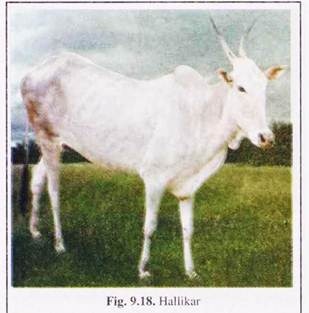 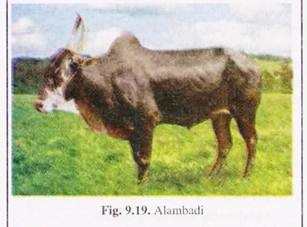 Small grey cattle (Fig. 9.20). Active and famous for power of endurance. These are poor milkers. Distributed in some parts of western India. 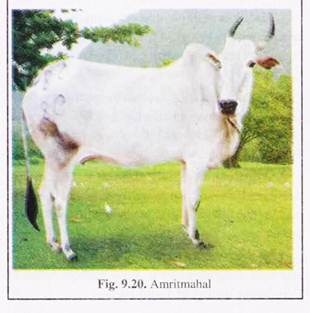 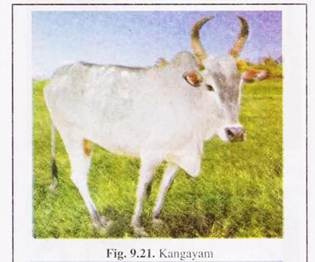 These are similar to Amritmahal breed and found in southern Maharashtra (Fig. 9.22). 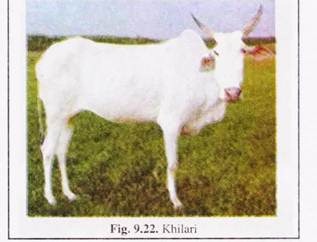 The Jersey breed (Fig. 9.23) originated on the Island of Jersey, a small British island in the English Channel off the coast of France. The Jersey is one of the oldest dairy breeds and has been reported to be pure-bred for nearly six centuries. This breed was known in England as early as 1771 and was regarded very favourably because of its milk and butterfat pro­duction.

At that time, the cattle of Jersey Island were commonly referred to as Alderney cattle, but later were referred to only as Jerseys. Adaptable to a wide range of climatic and geographical conditions, outstanding Jersey herds are found from Denmark to Australia and New Zealand, from Canada to South America, and from South Africa to Japan.

They are excellent grazers and perform well in intensive grazing programs. They are more tolerant of heat than the larger breeds. With an average weight of 500 kg, the Jersey produces more milk per kilogram of body weight than any other breed. 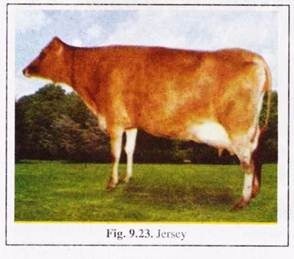 The modern Jersey breed is widely used in dairy farms. Additional emphasis on milk production and less stress on butterfat production had resulted in general acceptance of Jersey cows. Cows show very marked refinement about their heads and shoulders, carry long, straight top lines and usually carry out long and level at the rump.

There is no other appealing dairy animal than the well-balanced Jersey cow. She is usually docile and rather easy to manage. Jersey bulls, while small as compared to the other dairy breeds, are extremely masculine.

They are quite muscular around their crests and shoulders and are considerably less refined throughout than are the females. They usually range in weight from 650 to 900 kg. Jersey bulls are known for having the least docile temperament of the common breeds of cattle.’ Modern Jerseys may be of a wide range in colour.

The colour in Jerseys may vary from a very light grey or mouse colour to a very dark fawn or a shade that is almost black. Both the bulls and females are commonly darker around the hips and about the head and shoulders than on the body.

Jersey and Jersey crossbreed cows are most suit­able for those parts of India where availability of green fodder is scarce and extreme climatic condi­tions are observed. Average production of milk for all Jersey cows reared at a Model Dairy Farm in Anand in 2007-2008 was 4000 kg. Average fat content is 4.8% and average SNF (Solid Not Fat) is 8.4%.

The Holstein cow (Fig. 9.24) originated in Europe. The major development of this breed occurred in the Netherlands and more specifically in the two northern provinces of North Holland and Friesland which lay on either side of the Zuider Zee. The original stock was the black animals and white animals of the Batavians and Friesians, migrant European tribes who settled in the Rhine Delta region about 2,000 years ago.

For many years, Holsteins were bred and strictly culled to obtain animals which would make best use of grass, the area’s most abundant resource. The cross-breeding of these animals evolved into an efficient, high-producing black and white coloured dairy cow.

Holsteins are quickly recognized by their distinctive colour markings and outstanding milk production. Holsteins are large, stylish animals with colour patterns of black and white or red and white. 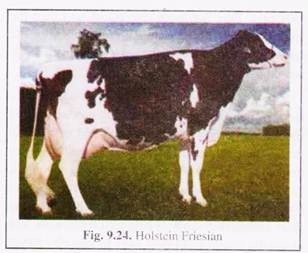 A mature Holstein cow weighs about 800 kg and stands 58 inches tall at the shoulder. Holstein heifers can be bred at 15 months of age, when they weigh about 450 kg. While some cows may live considerably longer, the normal productive life of a Holstein is 12 years. Average production for all Holsteins reared at a model dairy farm in 2007-2008 was 6000 kg. Average fat content is 3.8% and average SNF is 8.35%.