The following points highlight the three types of ecological pyramids. The types are: 1. Pyramid of Numbers 2. Pyramid of Biomass 3. Pyramid of Energy. 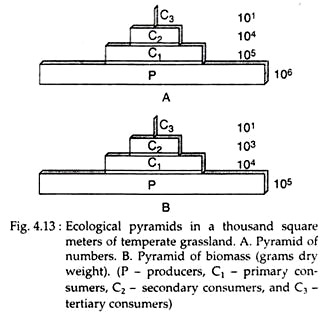 Food webs provide useful pictures of the feeding rela­tionships of the organisms in a community, but they are non-quantitative. Elton (1927) was the first person who attempted to pro­vide a quantitative law concerning the tro­phic levels.

Elton pointed out that in a small pond, the number of protozoa may run into millions, those of Daphnia and Cyclops into hundreds of thousands, while there will be fewer beetle larva, and only a very few small fishes.

To put it more definitely, the number of animals at the base of a food-chain are relatively abundant, while those at the end are relatively few in numbers, and there is a progressive decrease in between the two extremes (Fig. 4.13A).

Features of Pyramid of Numbers:

The pyramid of numbers is the result of three phenomena which generally operate simul­taneously:

3. In the pyramid of numbers there is inverse-size metabolic rate pattern. The smaller the organism the greater its meta­bolism per gram (or per calorie) of biomass.

1. The pyramid of numbers is not very fundamental or instructive as the relative effects of the “geometric”, “food chain” and “size” factors are not indicated.

2. The pyramid of numbers over-emphasises the importance of small organisms.

It has been seen that in the case of parasitic food chain the pyra­mid of number is inverted (Fig. 4.14). In a forest ecosystem, the producers are mainly large trees. A single tree may form the base of a pyramid. The herbivores, mainly the fruit eating birds, are more in number and each herbivore, in turn, may provide nutrition to several parasites.

These parasites may sup­port many hyper-parasites. Thus, the organisms from producers to consumers show gradual increase in number, making the pyramid inverted in shape.

The pyramid of biomass (Fig. 4.13B) is of more fundamen­tal interest. Here the “geometric” factor is eliminated and the quantitative relations of the “standing crop” are well-shown. When the total weight of individuals at successive trophic levels are plotted, a gradual sloping biomass pyramid may be expected as long as the size of the organism does not differ greatly.

The pyramid of biomass may be inverted (Fig. 4.15) if organisms of lower levels ave­rage much smaller than those of higher levels. In Fig. 4.15, the size of the producer (phyto­plankton) in a stocking pond at Kalyani, West Bengal, is very small in comparison to the consumer (silver carp). Similarly, the much smaller zooplankton supports the much larger consumer, Catla.

In such cases, even though more energy is being passed through the lower trophic level than through the upper trophic level, the rapid metabolism and turnover of the smaller organisms (phyto­plankton and zooplankton) accomplish a larger output with a smaller standing crop biomass.

The pyramid of biomass over-emphasizes the importance of large organisms.

The pyramid of energy is the rate of passage of food mass through the food chain. Its shape is not affected by variation in size or metabolic rate of individuals. If all the sources of energy are considered then the pyramid of energy (Fig. 4.16) would always be pyramidal because of the second law of thermodynamics. 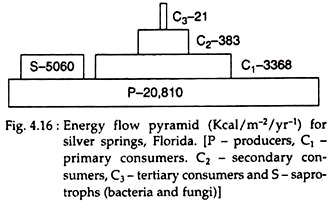 1. The energy pyramid provides a more suitable index for comparing any and all components of any ecosystem.

2. It evaluates the relative importance of populations.