In this article we will discuss about the food chains, food webs and trophic levels of various organisms in the environment.

The transfer of food energy from the soured in plants through a series of organisms with repeated eating and being eaten, is called food chain (Fig. 48.2). 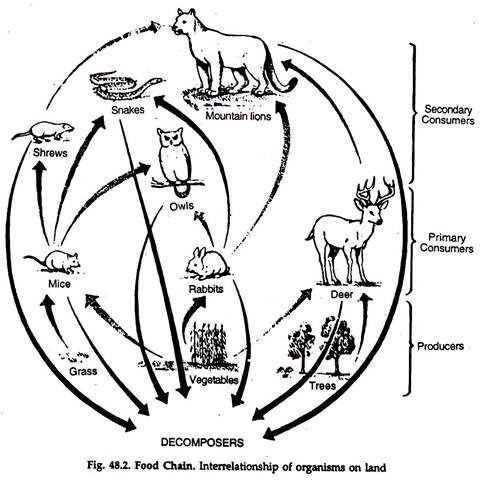 a. At each transfer about 80 to 90 per cent of the potential energy is lost. A small fraction of energy is lost due to the inability of the consumer to fully digest the food and absorb the nutrients, The major loss is to meet the metabolic requirements of the consumer.

b. To minimise the loss, the number of steps or links in a sequence is limited, usually to four or five.

c. The shorter the chain, the greater is the available energy.

Starting from a base, viz., green plants, bacteria → micro- and macrophages herbivores → carnivores.

Food chains are not isolated sequences but interconnected with one another. A particular species may be eaten by a number of consumers and a consumer may eat a number of species. Food web is the trophic relationship among the species in an area. A food web usually consists of a number of food chains.

a. The radiant energy is transformed into chemical energy.

b. The chemical energy is transformed into mechanical and heat energy in cellular metabolism.

c. The solar flux is a constant and its value is 2 calories per square centimetre per minute (2 cal/cm2/min).

d. Plants absorb about 45% of the solar energy reaching an ecosystem, a part of which is lost as heat and the rest is used in photosynthesis.

This is best expressed by the equation of photosynthesis.

The amount of carbohydrate synthesized by plants.

Certain amount of carbohydrate produced is used in respiration of plants and the rest is net primary production.

A part of the net primary production is consumed by animals. The sum total of the part left is known as net community pro­duction.

A good number of techniques, viz., Har­vest method, Oxygen and Carbon dioxide measurement, pH method, Radio-active method and, Disappearance of raw materi­als, have been developed to measure pri­mary production, i.e., the amount and rate of energy fixation by autotrophs.

Fate of Energy beyond the Pri­mary Consumers:

In the carnivore level again, 60% of the energy is spent in metabolism and the rest 40% becomes part of the non-utilised sedi­ments.

1. The interactions of the food chain phenomena and the size-metabolism rela­tionship results in communities having a definite trophic structure, which is often characteristic of a particular type of eco­system.

2. Trophic structure arid the trophic function may be shown graphically by means of ecological pyramids (Fig. 48.3), in which the first or the producer level forms the base, and the successive levels or the tiers make up the apex.

3. The pyramid of biomass is based on the total dry weight, caloric value, or other measure of the total amount of living ma­terials.

4. In general, the biomass pyramid gives a rough picture of the overall effect of the food chain relationships for the ecological group as a whole

5. When the total weight of individuals at successive trophic levels is plotted, a gradually sloping pyramid may be expected as long as the size of the organisms dose not differ greatly.

Biogeochemical Cycle of the Ecosystem:

The elements, including all the essential elements of protoplasm, circulate in the biosphere in characteristic paths from environment to organisms and back to the en­vironment. This is biogeochemical cycle. The elements and dissolved substances essential to life have been termed biogenic salts or nutrients.

Hydrological cycle (Fig. 48.4) is con­cerned with the movement of a compound, the water. Water is an agent of geologic change, eroding in one place and depositing in another. It distributes many chemicals including salts and dissolved gases. Water prevents great fluctuation of temperature and helps in metabolic activity of the orga­nisms.

1. The cycle involves an interchange of components between the earth’s surface and the atmosphere via precipitation and evapo­ration.

2. The world precipitation is about 5.20 x 1020g (geo-gram) annually. Of this about 1.08 x 1020g falls on land surfaces, the remainder 4.12 x 1020g on ocean surfaces. The distribution of particular types of eco­systems is dependent on precipitation and evaporation.

6. The circulation pattern of atmosphere determines the pattern of precipitation.

The atmosphere constitutes the major reservoir of elements that exist there in gaseous state. Carbon and nitrogen are chief constituents of the gaseous nutrient cycle.

The carbon cycle is simplest of all the nutrient cycles.

1. The cycling of carbon from atmo­sphere to producers → consumers → de­composers and back to atmosphere is known as carbon cycle (Fig. 48.5). 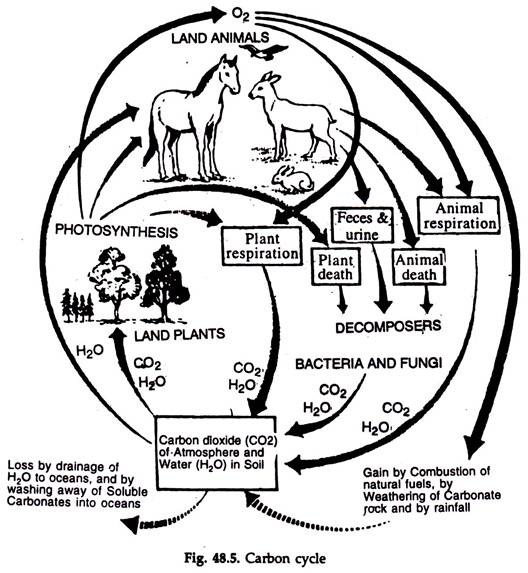 2. Ocean is the chief reservoir of carbon. It is stored as bicarbonate and the amount is fifty times greater than that in the air. This carbon regulates the amount of carbon in the atmosphere.

3. Atmosphere is the minor reservoir, but the basic movement occurs through it

6. A considerable amount of biologically fixed carbon is returned to the atmosphere as gaseous CO2 through respiration of producers and consumers.

7. The decomposers return a greater amount through their respiration and pro­cessing of waste materials.

8. The interchange between atmospheric and aquatic carbon dioxide occurs through diffusion, the direction of flow governed by the concentration.

9. The aquatic phase occurs through pre­cipitation.

10. A litre of rain water contains about 0.3 ml CO2. The dissolved CO2 combines with the water of the ecosystem and forms car­bonic acid, the reaction being always revers­ible.

11. The carbonic acid in its turn dissoci­ates in a reversible reaction into H+ and HCO2 ions. The bicarbonate ions again dis­sociate reversibly into H+ and CO3 ions.

The movement of nitrogen from atmo­sphere to earth and back to the atmosphere is called nitrogen cycle (Fig. 48.6). It is a complete and perfect cycle.

1. The atmosphere contains about 79% nitrogen but most organisms are unable to use this nitrogen.

2. Nitrogen for the use of organisms comes from inorganic substances like am­monia, nitrite and nitrate and also in organic forms like urea, protein and nucleic acids. 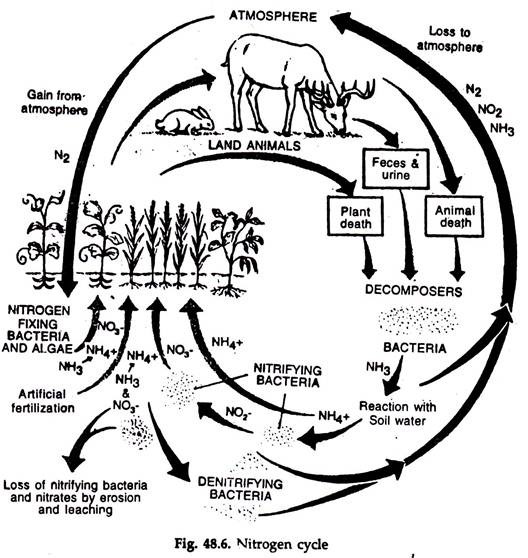 The nitrogen of the air is transformed into nitrates by. (A) electrification and pho­tochemical means and (B) nitrogen fixing organisms, chiefly microorganisms.

A. The amount of nitrogen fixed by elec­trification and photochemical processes is about 35 mg/m2/yr.

Nitrates and other simpler nitrogen com­pounds are used by plants for the synthesis of amino acid and protein, which, in turn, reach the animals.

The protoplasm of dead animals and plants is acted upon by bacteria, actinomycetes and fungi, both on land and in water. While utilizing the organic nitrogen- rich materials, they convert those to and release the organic form, ammonia. The process is ammonification or mineralization. A good amount of ammonia is also gained from volcanic action.

The process by which ammonia or am­monium salts are converted to nitrates is known as nitrification. It is slow, pH-dependent and occurs in acid condition.

The process has two steps—(a) The bacteria Nitromonous convert ammonia to nitrite (NO2) and (b) other bacteria, viz., Nitrobactor con­vert nitrite into nitrate (NO3). Some organisms can use nitrogen in ammonia, but the majority are incapable of doing this. Nitrate is the accessible form to them.

Release of nitrogen from nitrogenous compounds is de-nitrification. By the action of denitrifying bacteria Pseudomonas, Bacillus denitrificans. Mirococus, which can free the nitrogen, it enters the air as a gas and the nitrogen cycle is maintained.

The characteristic of nitrogen cycle is that the steps in conversion of protein to nitrates provide energy to the organisms which accomplish the breakdown. But the return steps from nitrite to protoplasm require energy from other sources, sunlight or or­ganic matter.

The lithosphere constitutes the major res­ervoir of the elements—phosphorus and sulphur. Phosphorus and sulphur play im­portant role in the metabolism and growth of organisms. In the pathway of these es­sential nutrients short or long term stagna­tion occurs. Sedimentation in the oceans and deep continental lakes are most significant stagnation stages. 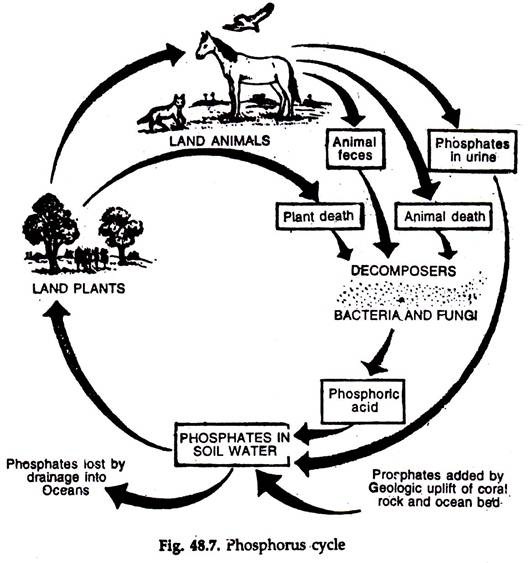 1. The rocks or other deposits formed in geological ages are the reservoirs of phos­phorus.

2. Phosphorus is released to the ecosys­tem with the erosion of the reservoirs.

3. Much of the released phosphorus reaches sea, where a part of it is deposited in the shallow sediments, and a part is lost in the deep sediments.

The return to the cycle is inadequate.

1. Sea birds bring back phosphorus through their ‘guano’ deposits.

2. Marine fish harvested by man is also a good source of phosphorus.

Plants take inorganic phosphate as orthophosphate ions. The phosphorus is trans­ferred to consumers. After death, dissolved phosphate is released with the action of microorganisms, the decomposers. The ex­creta of animals also return phosphorus to the cycle.

The reservoirs of sulphur are soil and sedimentary rocks. The atmosphere is a minor reservoir formed from fuel combus­tion.

1. The sulphur cycle (Fig. 48.8) is regu­lated by a group of specialized microorgan­isms, each carrying out a particular oxida­tion or reduction.

2. The sedimentary aspect of the cycle involves precipitation of sulphur in the pres­ence of iron in anaerobic condition.

3. Ferrous sulphate is insoluble in neu­tral or alkaline water and as a result the sulphur has the potential for being bound up under these conditions to the limits of the amount of iron present.

4. The biologically incorporated sul­phur is mineralized by bacteria and fungi in decomposition. Some such sul­phur is also directly reduced to sul­phides, including hydrogen sulphide, by bacteria.

The sulphur cycle is regulated by the interaction of geochemical, meteorological and biological processes. Inorganic sulphate SO4 is the source of elemental sulphur in the ecosystems. The sulphate is reduced to el­emental sulphur or to hydrogen sulphide by anaerobic bacteria. 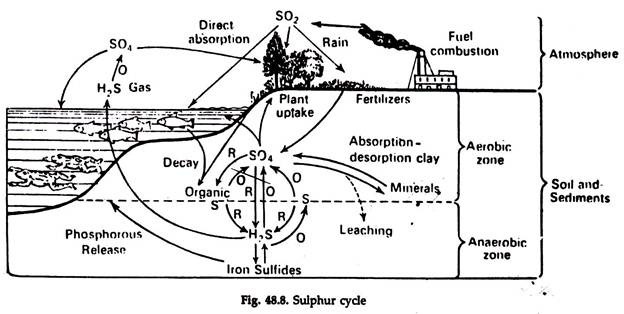