Vermi-compost has been shown to be richer many nutrients than compost produced by other riposting methods. It also has outperformed a commercial plant medium with nutrients added, but needed adjustment for magnesium and pH.

However, other studies have shown that the effects of homemade, backyard vermi-compost compared to municipal compost were lower in terms of soil microbial biomass, soil microbial activity, and yields of a species of ryegrass.

Further, one study concluded that the differences between methods of composting were in large part due to the feedstock, and therefore, no generalisations can be made between composts made from varying materials.

It is rich in microbial life which converts nutrients already present in the soil into plant- available forms. Unlike other compost, worm castings also contain worm mucus which prevent nutrients from washing away with the first watering and holds moisture better than plain soil.

ii. Enriches soil with micro-organisms (adding enzymes such as phosphatase and cellulase).

iii. Microbial activity in worm castings is 10 to 20 times higher than that the worm ingests in the soil and organic matter.

v. Improves water holding capacity due to the presence of the wound mucus.

ii. Elimination of bio-wastes from the waste stream reduces contamination of other recyclables collected in a single bin (a common problem in communities practising single- stream recycling).

i. Helps to close the “metabolic gap” through recycling waste on-site.

ii. Production reduces greenhouse gas emissions such as methane and nitric oxide (produced in landfills or incinerators when not composted or through methane harvest).

i. Vermi-compost can be mixed directly into the soil, or steeped in water and made into a worm tea by mixing some vermi-compost in water, bubbling in oxygen with a small air pump, and steeping for a number of hours or days.

ii. The microbial activity of the compost is greater if it is aerated during this period. The resulting liquid is used as a fertilizer or sprayed on the plants.

iii. The waste liquid or leachate, that drains into the bottom of some vermi-composting systems as water-rich breakdown foods. It is best applied back to the bin when added moisture is needed.

iv. The pH, nutrient, and microbial content of these fertilizers vary upon the inputs fed to worms. Pulverised lime stone or calcium car­bonate can be added to the system to raise the pH for making a sustainable environment.

When closed, a well-maintained bin is odourless; when opened, it should have little smell; if any, the smell is earthy. Worms require gaseous oxygen. Oxygen can be provided by air holes in the bin, occasional stirring of bin contents, and removal of some bin contents if they become too deep or too wet.

If decomposition becomes anaerobic from excess feedstock added to the bin in wet conditions, or layers of food waste have become too deep, the bin will begin to smell like ammonia.

If decomposition becomes anaerobic, then to restore healthy conditions and to prevent the worms from dying, the smelly, excess waste water must be removed and the bin is returned to normal moisture level. This is done by reducing the addition of food scraps which has high moisture content, and then adding fresh, dry bedding (such as shredded newspaper) into the bin and mixing it well. 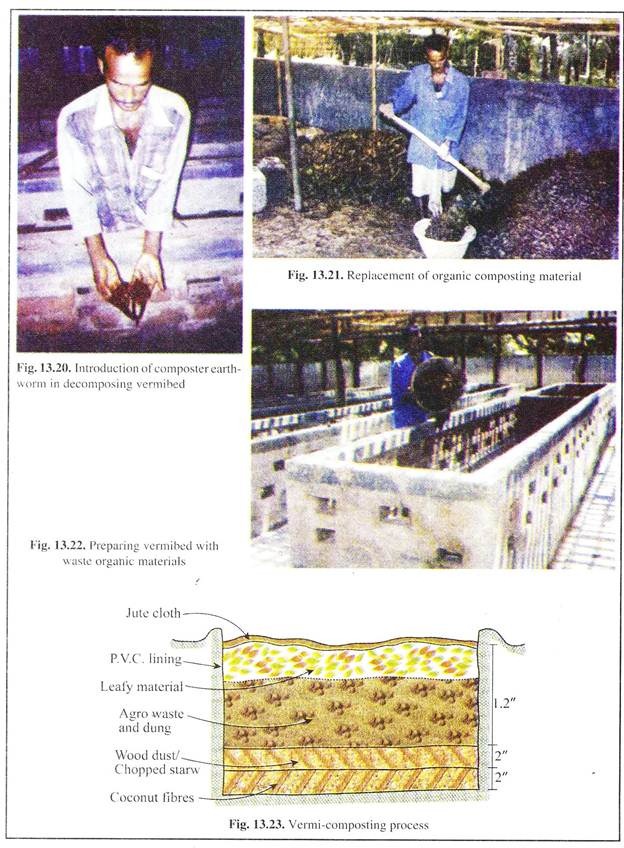 Pests such as rodents and flies are attra­cted by certain materials and odours, usually from large amounts of kitchen waste, particularly meat. Eliminating the use of meat or dairy product in a worm bin decreases the possibility of pests.

In warm weather, fruit and vinegar flies breed in the bins if fruit and vegetable waste is not thoroughly covered with bedding. This problem can be avoided by thoroughly covering the waste by at least 2 inches of bedding. Maintaining the correct pH (close to neutral) and water content of the bin can help avoid these pests as well.

Worms generally stay in the bin, but may try to leave the bin when first intro­duced, or often after a rainstorm when outside humi­dity is high. Maintaining adequate conditions in the worm bin and putting a light over the bin when the worms are first introduced, eliminates this problem.

Commercial vermi-composters test, and may amend their products to produce consistent quality and results. Because the small-scale and home systems use a varied mix of feedstocks, the nitrogen, potassium and phosphorus content of the resulting vermi-compost will also be inconsistent.

NPK testing may be helpful before the vermi-compost or tea is applied to the garden. In order to avoid over- fertilisation issues, such as nitrogen burn, vermi­compost can be diluted as a tea 50:50 with water, or as a solid can be mixed in 50:50 with potting soil. The mucus produced creates a natural time release fertilizer which cannot burn plants.