Loricifera, described by the Danish zoologist, R. M. Kritensen in 1983, is by far the most recently discovered phylum. They comprise of minute animals, about 250 µm in length, that lives in the interstitial spaces of shelly, marine gravel at depths from 15 to almost 8300 m.

Members of the phylum have been collected from many places around the world, but they have not been observed alive and current knowledge about them is based solely on preserved specimens. These animals adhere so firmly to the gravel substrate that they cannot be removed easily, which probably accounts for their late discovery.

Latin: Lorica, a breastplate or corselet; ferre, to bear.

iv. The cone shaped anterior end is the eversible head or introvert that bears many re-curved spines (scalids) on its lateral surface.

v. At the end of the introvert is the tele­scopic mouth surrounded by eight oral stylets.

vii. The major part of the body is the trunk or abdomen, which is encased within a cuticular lorica composed of a dorsal, a ventral and two lateral plates.

viii. The head and neck are retractable into the lorica.

ix. Presence of a straight gut and a terminal anus.

xi. Excretory system formed of one pair of protonephridia.

xiii. Sexes separate, each with a pair of gonad.

xiv. A larval (Higgins larva) stage is present, somewhat similar to the adult except that the buccal cone lacks stylets and the thorax lacks spines.

Scheme of Classification of Phylum Loricifera:

There are over 100 loriciferan species known, most of them yet un-described (R. S. K. Barnes, 1988). A single order Nanaloricida, is currently recognised that comprises of three families. 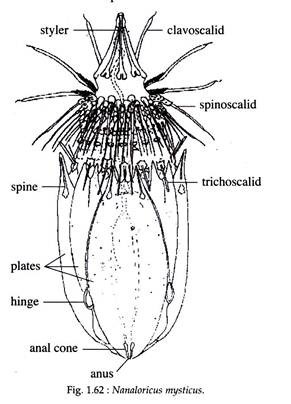