The Ctenophorans are a small group of free-swimming, planktonic marine animals with transparent, delicate, gelatinous bodies. They are commonly known as sea walnuts or comb jellies. About 50 known species are pre­sent in this phylum and are abundant in coastal water.

v. Eight meridional rows of ciliary plates are present which help in locomotion.

ix. Nervous system is in the form of a sub-epidermal nerve network which is particularly well developed beneath the comb rows.

Scheme of Classification of Phylum Ctenophora:

The first definite description of ctenophores was given by Martens (1671). It was Hatschek (1839) who put all the ctenophores under a distinct phylum. Nearly all authors have divided ctenophores into two classes, the Tentaculate (six orders) and the Nuda (beroids only).

Parker and Haswell, 1972 (as revised by Marshall and Williams, 7th edn.), has also divided ctenophores into 2 classes — Tentaculata (Micropharyngea) and Nuda (Macropharyngea). 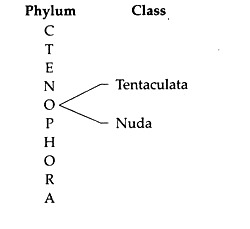 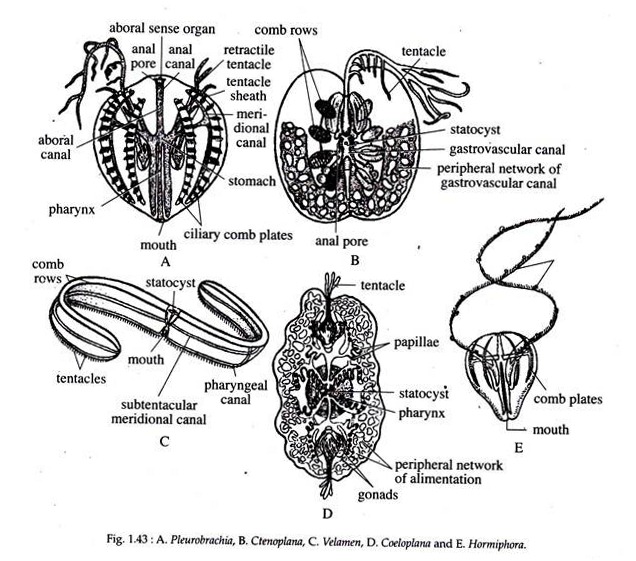 i. The members of this class possesses two tentacles.

ii. It is divided into 4 orders. 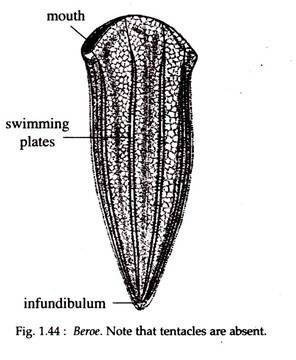 i. The representatives of this class lacks tentacles.

ii. It includes only one order.

iii. They are predators on other ctenophores.