Hemichordata, the name derives from the fact that some species possess at least half (pharyngeal perforations and a hollow dorsal nerve cord) of the main features that distin­guish the phylum chordate. For this the hemichordates have been included among the non-chordates as a separate phylum.

This group of animals are more or less worm like, living in temporary and perma­nent tubes in the sea and have retained the presumed ancestral tripartite body of pro- some (proboscis), mesosome (collar) and metasome (trunk). At present there are about 90 known species (Barnes et al. 1993).

Greek: hemi, half; Chordata referring to the phylum of that name.

iv. Each body region with one (proboscis) or two (collar and trunk) enterocoelic body cavities.

vi. Epidermis ciliated, cuticle-less and in some it secretes an external non-chitinous tube.

vii. The pharyngeal wall is perforated by 1 to more than 100 pairs of slits through which water flows out.

x. Nervous system is of diffused type and in some with a hollow dorsal neurocord in the collar.

xii. Development deuterostomatous and indirect through a larval (Tornaria) stage.

Scheme of Classification of Phylum Hemichordata:

Hemichordates are of two main types, which differ considerably in their body form and life style. Likewise most authors (Meglitsch and Schram, 1991; Ruppert and Barnes, 1994) have classified it into 2 classes— Enteropneusta and Pterobranchia.

Barnes et al., 1999 have added an extra class Planctosphaeroidea (temporarily) for some giant larvae resembling in their general form to those of enteropneusta, but their adult forms are still unknown. The classification given here is after Ruppert and Barnes, 1994. 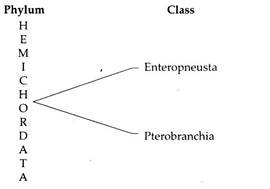 i. The body of enteropneusts or acorn worms are worm-like elongated, majo­rity ranging between 9 and 45 cm in length.

ii. They are solitary animals.

iv. Collar short and without arms.

vi. Gut straight with a terminal anus and many pharyngeal pores.

vii. The neurocord and glomerulus are well developed.

viii. Reproduction by both asexual (by frag­mentation) and sexual (through gonads, discharging the gametes by means of a duct) method.

About 70 enteropneust species have been identified.

i. The pterobranchs are sedentary, tube-dwelling animals having a short body measuring about 122 mm in length.

ii. They are aggregative or colonial.

iv. Collar bears ventrally the mouth and on the dorsal side possesses one to nine pairs of lophophoral arms bearing tentacles.

vi. Gut U-shaped, with or without pharyn­geal slits. 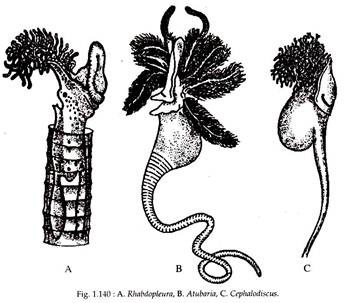