The following points highlight the top two phases of obelia. The phases are: 1. Hydroid or Polyp Phase 2. Medusoid Phase.

Hydroid stage of Obelia is in a colonial form. It is a branched filament like structure and remains attached with the substratum. This colony is polymorphic, i.e., number of individuals or zooids are present which are morphologically as well as functionally different from each other.

The polyp is com­posed of following structures:

Obelia colony is constituted of two portions, the horizontal portion is called the Hydro­rhiza and the vertical portion bearing the zooids is named as the Hydrocaulus (Fig. 1.36).

Most of the zooids present in the hydroid stage of Obelia are the Gastro-zooid (Fig. 1.36 and 1.37A). They are specially designated to perform nutritive function and feed the whole colony. Each Gastro-zooid has a short tube-like body having at its distal end a conical projection called the hypostome or manubrium.

The mouth is situated at the terminal end of the manubrium. Surrounding the manubrium there is a circlet of about twenty four solid tentacles.

These particular types of zooids are few in number in comparison to the number of gastro-zooids. Each blastostyle has a long cylindrical body without mouth and tentacles (Fig. 1.37B). The coelenteron is greatly reduced. It is enclosed by a transpa­rent covering called gonotheca. The lateral wall of the body gives off small lateral buds called the medusa-buds.

Medusa develops as hollow offshoot of the blastostyle. When fully-formed, it assumes the appearance of an umbrella with a convex surface by which the medusa was attached with the blastostyle (Fig. 1.37C). This convex side is called the ex-umbrella and the concave side of the umbrella is known as the sub-umbrella.

From the centre of the sub- umbrellar surface emerges a hanging tube called the manubrium bearing a square mouth at its terminal end (Fig. 1.37D). The edge of the umbrella gives rise to a very short circular shelf called the velum. At the junc­tion of the exumbrellar side and velum there is a circlet of tentacles.

The number of tentacles is sixteen in a newly-formed stage but the number may increase with age. At the bases of alternate tentacles there lies a sense organ in the form of lithocyst or marginal sense organ (Fig. 1.37C). Each lithocyst has a very small spherical sac-like body that encloses a central calcareous mass and sen­sory cells. These sense organs regulate and co-ordinate the movement of the organism.

The mouth leads into the coelenteron lodged inside the manubrium. From the base of the coelenteron emerge four equidistant radial canals, which ultimately open into a ring canal situated at the margin of the body of the umbrella. Through these canals food matters are conveyed to the different parts of the body.

The whole organisation of the body of the medusa exhibits distinct radial symme­try. The medusae are unisexual (dioecious). Gonads are ectodermal in origin and remain in close association with the radial canals towards the subumbrellar surface. They have rounded appearance and are four in number. Both the male and female gonads are similar externally.

The male gametes or sper­matozoa, after maturation, are liberated into the water and one spermatozoa fertilizes a female gamete or ovum and thus results into the formation of a zygote. The single-celled zygote divides repeatedly and the daughter cells reorganize to form stages like blastula and gastrula in due course. Finally, a larval form—the planula larva is produced.

The planula larva has an elongated and ovoid appearance. The outer layer of the body is composed of ciliated ectodermal cells and the inner layer is made of endodermal cells. Mouth is absent. It is free-swimming and contains a cavity which is the primordial coelenteron.

After a brief free-swimming existence, the planula larva settles down, fixes itself to the substratum by one pole and transforms itself into the next stage—the hydrula stage.

The fixed end of this form is designated as the aboral end and the free or oral end develops a manubrium and a circlet of tentacles. Then a mouth is formed at the centre of the manubrium. The hydrula, thus formed, gives out lateral buds and transforms into an Obelia colony and exhibits typical instance of metagenesis.

The male and the female gametes (n) are produced in the respective gonads. Mature male and female gametes unite and results into the formation of zygote (2n), which in turn passes through the usual developmental stages.

The developmental process in Obelia is indirect and intervened by the presence of larval forms, which gives rise to the Obelia colony. So in the life-cycle of Obelia there is a distinct alternation of two phases (Fig. 2.89 and 2.90). 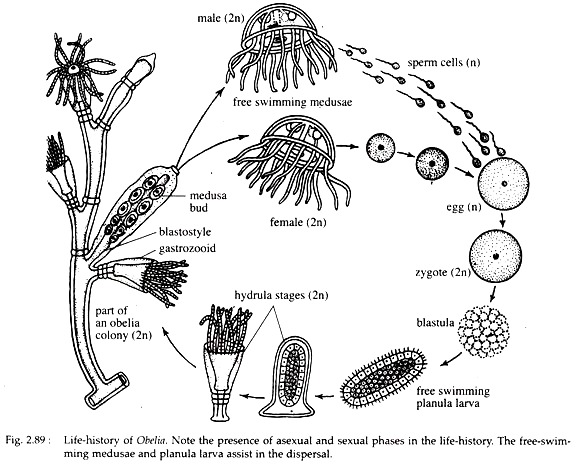