In this article we will discuss about the life cycle of obelia, explained with the help of suitable diagrams.

1. It is a branched, fixed colony (Fig 20.12). Some of the horizontal branches anchoring the colony on some support are called Hydrorhiza while other branches are vertical and known as Hydrocaulus. 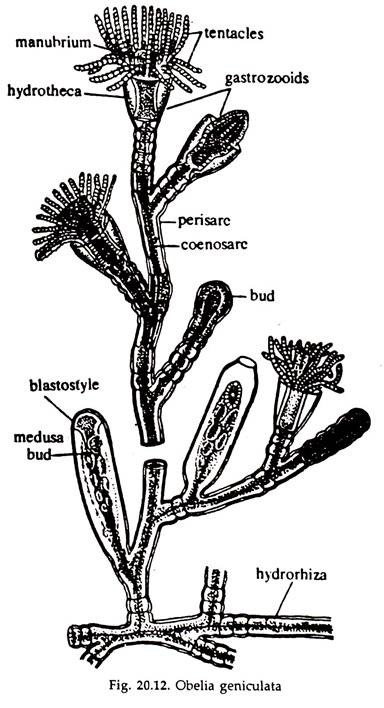 3. The vertical branches towards the base are further branched and all the branches end in zooids.

4. Zooids are of three types:

a. Polyps or gastro zooids (vegetative zoo­ids). Barrel-shaped and responsible for the nutrition of the colony. The perisarc enclos­ing the polyp is termed hydro theca.

5. Medusae buds are unisexual and free- living at maturity. One medusa bears either four testes or four ovaries close to the four radial canals.

6. The tentacles in all cases are solid; the solid core or endoderm surrounded by a layer of ectoderm cells.

7. The larvae are ciliated and free-swim­ming.

8. By repeated branching of the simple polyps colony is formed.

1. The zooid is barrel-shaped, partially enclosed by a cup-shaped hydro theca, a continuation of the perisarc.

2. At the distal end a conical projection the hypostome or- manubrium, bearing a mouth is present (20.13). 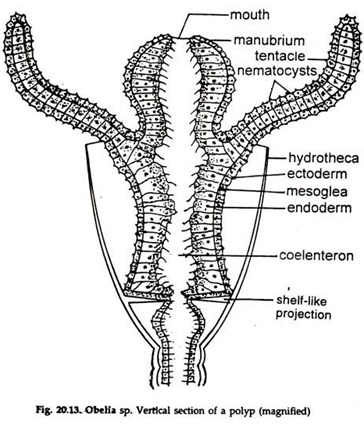 3. A circlet of about twenty-four tentacles are present around the hypos tame. The ten­tacles are solid with a core of endoderm cells surrounded by a layer of ectodermal cells.

4. The tentacles and the hypostome bear cnidocytes.

5. At the proximal end, the zooid is con­tinuous with the coenosare.

1. These are a few in number and re­stricted to the basal end of the hydrocaulus.

2. The blastosyle is long, cylindrical and devoid of mouth and tentacles and enclosed in a transparent gonotheca, modified perisarce (Figs. 20.12, 20.16).

1. At maturity, small umbrella-like me­ dusae buds get detached from the blastostyle and escape to the sea water through an aperture at the free end of the gonotheca. A hydro-medusa (Fig.20.14) is a solitary and free-swimming modified zooid. 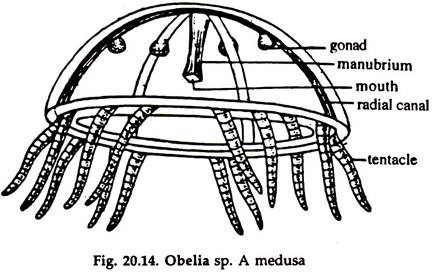 2. A typical medusa consists of a bowl- shaped gelatinous disc or umbrella, the con­cave surface of which is described as sub-umbrella and the outer convex surface as ex-umbrella.

3. A cylindrical projection, the manu­brium, hangs from the middle of the subumbrellar surface. A square mouth is present, at the apex of the manubrium.

4. The mouth leads to a small, central, rounded or quadrangular chamber known as gastric cavity or stomach.

6. From the middle of the radial canal four gonads project. Since sexes are separate, these are either testes or ovaries.

7. The gonads mature after the medusae escape from the gonotheca.

8. The edge of the bell is produced in­wards as a thin fold called velum. The me­dusae with a velum are known as craspedote and those without a velum are acraspedote. The hydromedusa is craspedote.

10. The tentacles have swollen bases of accumulated interstitial cells, called vesicles or bulbs. Cnidocytes are formed continu­ously in the bulb and migrate to the tentacles. They are confined to manubrium and ten­tacles and a few on the bell margin.

11. Near the bulbs the ectoderm has pig­ment granules and nerve cells called ocelli. The pigments are accumulated excretory products.

12. Marginal sense organs, statocysts or lithocysts are eight in number and attached at regular intervals on the subumbrellar side to the bulbs of the tentacles.

13. A statocyst is a tiny, circular, closed vesicle lined with ectoderm and filled with a fluid containing calcareous granules called otoliths.

14. Otolith produces a stimulus on thin sensory processes of the sensory tells of ectodermal lining which are transmitted to the muscles. The muscles coordinate the snake-like swimming movements of the medusa.

2. The whole canal system is lined by endoderm cells, continued, at the lip of the mouth, into the surface ectoderm.

3. A thin sheet of endodermal lamella, presumably formed by the fusion of an upper and a lower layer of endoderm, lie between the radial canals and between the ex- and subumbrellar layers of ectoderm. 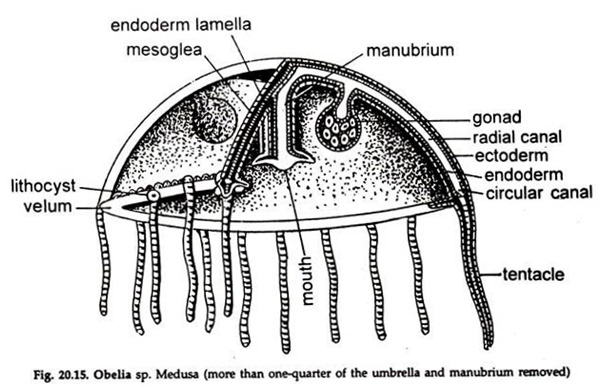 4. The velum is composed of a double layer of ectoderm enclosing a ring canal and a strip of narrow mesoglea in between the canal and ectoderm.

5. The tentacles are solid, each containing a core of vacuolated endodermal cells cov­ered by ectoderm.

6. The gelatinous mesoglea form the main bulk of the body and contains certain non-cellular fibres.

8. The interstitial cells are mainly accumu­lated at the bulbs or vesicles of tentacles and give rise to cnidocytes of only one type.

1. The medusae are sexual reproductive zooids or gonozooids possessing gonads.

2. They are dioecious—testes and ovaries are borne by separate individuals.

3. Each medusa bears only four gonads situated on the subumbrellar surface, one on the middle of the course of each radial canal.

4. The gonads mature after the medusae escape from the gonotheca.

6. The space between the two layers is filled with a mass of interstitial cells which become differentiated into ova or sperms, as the case may be.

7. The germ cells originate in the ecto­derm of the manubrium quite early when the medusa itself remains attached to the blastostyle.

8. Subsequently, they migrate to the go­nads to lie between the mesoglea and the subumbrellar ectoderm and undergo matu­ration.

9. When the gonads are ripe, ectodermal covering ruptures and the germ cells are shed in water.

10. The ova are large rounded cells.

12. The medusae die soon after liberating the gametes.

Fertilization and Development in Obelia:

1. Fertilization occurs either in the sea water where the germ cells are set free, or the spermatozoa may be carried by water cur­rents to the female medusae and fertilize the ova in situ. Zygote formed after fertilization, immediately undergoes cleavage. 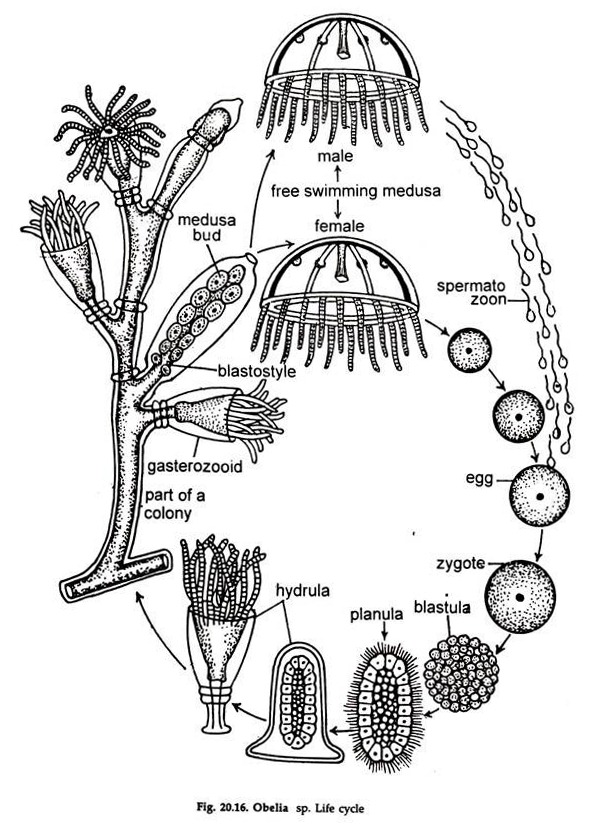 3. By invagination the blastula is con­verted into an oval, ciliated planula larva.

4. The planula consists of an outer layer of ciliated ectoderm and an inner mass of endo­derm cells enclosing a space, the rudiment of coelenteron.

5. The planula swims freely for a brief period and settles down on some submerged substratum by one end.

6. The proximal end gradually narrows down and a disc appears for attachment. The distal end expands and by developing a manubrium and a circlet of tentacles, it turns to a hydrula or simple polyp.

7. The hydrula sends out lateral buds and, by a repetition of this process, it is converted into a complex obelia colony.

Alternation of Generations of Obelia:

A distinct alternation of generations or metagenesis is present in the life history of Obelia. The Obelia colony is sexless, bears no gonads and develops by asexual process, i.e. by repeated budding of the hydrula.

But the medusae buds, some of the zooids of the colony, develop gonads and, from their fer­tilized egg, new Obelia colony arises. The asexual generation is dependent on, and is alternated by the sexual generation.

Obelia is a permanently fixed colony but the planula larvae it produces are free swim­ming. The larva can swim from place to place with the help of cilia and, being aided by water current, it can travel a long distance. Thus, a non-locomotory species becomes locomotory and an overcrowding of individuals within a limited area is avoided and, thereby, the species is successfully continued.

Classification of the Phylum Platyhelminthes | Zoology
Examples of Protozoa | Zoology