The below mentioned article provides a study note on the Locomotion in Hydra.

Hydra represents one of the smallest soli­tary polyp amongst the cnidarians; most of them inhabit fresh water bodies except Proto-hydra which is marine. Hydra normally remains attached to and hanging downwards from the substratum in water, by their basal disc. The body stalk and tentacles can extend, contract, or bend to one side or the other.

In hydras the gastro-dermal fibres in most part of the body are so poorly developed that the movement almost entirely depend on the contraction of longitudinal epidermal fibers. Besides, fluid within the gastro-vascular cavity plays an important role in locomotion as hydraulic skeleton.

By taking the water through the mouth, a relaxed Hydra may stretch out to a length of 20 mm, whereas con­traction of the epidermal fibres can reduce it to a mere 0-5 mm. For capturing the prey or to change the position, hydras can detach and shift locations by different types of movement.

The aboral end of the tubular body of Hydra is named as basal disc or foot (Fig. 1.32D). It is used as a structure for attachment to the substratum. In this region, the epithelia muscular cells are modified into tall cells with granular cytoplasm.

These cells produce a sticky secretion that helps the animal to adhere to the substratum under the water. Sometimes, these cells also produce gas bub­ble which enables the animal to float in water.

In hydras, the mouth is situated at the summit of a conical elevation called the hypostome. The base of the hypos- tome is surrounded by tentacles (Fig. 1.31), the number of which vary from four to eleven in different species.

The myoep­ithelial cells are the most common type of cells found in the epidermis of hydras. The cells are columnar in shape, with the base resting upon mesoglea and the distal end forming the epidermal surface.

These cells possess two or more basal extensions, each containing a contractile myofibril. The ends of successive extensions are connected to each other, forming a cylindrical longitudi­nal, contractile layer (Fig. 2.18). The contrac­tion of this layer shortens the body column and the tentacles. 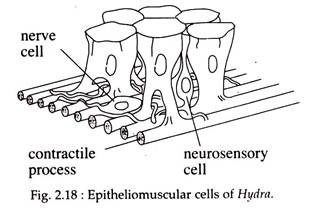 Hydra can move from place to place by looping. During looping, Hydra bends its body from the erect standing position and fixes the tentacles to the sub­stratum by the glutinant nematocysts.

It then releases the attachment at the basal disc and moves its free end to a new site. The animal then stands up by making free its tentacles (Fig. 2.19). The whole process appears like a series of looping movements of a caterpillar or leech.

Another method of rapid movement in Hydra is somersaulting which is a slight modification of looping locomotion. Hydra fixes itself on the substratum by the hypostomal end and then shifts the attachment of basal disc. The basal disc is then rotated 180° and is fixed to a new position. The hypostome is again raised and the animal assumes its upright position (Fig. 2.20).

Hydra may glide along the substratum by the pseudopodia action of the basal disc cells.

Hydra can produce a bub­ble of gas, secreted by the basal disc cells which helps the animal to float on the surface of water (Fig. 2.21). The animal is passively carried from one place to another by water current. If the gas-bubble bursts, the mucous threads sustain the body on the water surface due to surface tension. 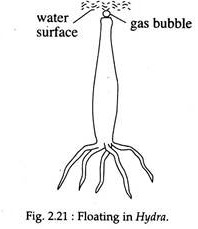 Pelmatahydra can change its location in a limited area. The animal climbs by attaching its long tentacles to some object. It then releases the foot, contracts the tentacles and thus gets lifted up to the object (Fig. 2.22). 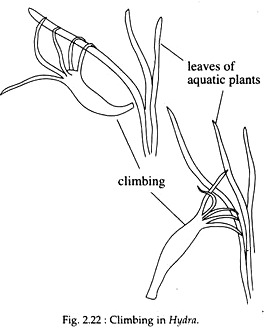 Sometimes Hydra makes itself free from the substratum and swims in water by the undulating wave-like movements of the body. A characteristic feature in the behaviour pattern of Hydra is the periodic contraction. It happens without any apparent cause even when the animal is attached and undisturbed.

In daytime, at every 5-10 minutes the animal contracts its body and tentacles suddenly and rapidly, becoming like a small barrel. After a short period of rest, the body and the tentacles gradually get extended to a new direction. According to McCullough (1963); such move­ments bring the animal into new hunting grounds, where more food may be available.