In this article we will discuss about the process of locomotion in animals with the help of suitable diagrams.

Locomotion involves change of place. It requires a means for support, development of a thrust against surrounding medium and stability. Some sort of skeleton, within (endoskeleton) or outside (exoskeleton) the body is present in most animals. It supports the ani­mal and helps to maintain body shape.

Most of the aquatic animals have a neutral buoyancy and neither sink nor rise. In some cases, gas chambers (cnidarians, molluscs), swim bladder (fishes), oil in tissues (planktons) and certain other materials help in maintaining neutral buoyancy. Land ani­mals are supported by skeleton.

The thrust is derived by pushing against the substratum or surrounding medium. This is effected by forming a jet of water (squids), undulation of the body (fishes and both aquatic and terrestrial snakes), air moving over wings (birds and some mammals) and pushing of legs (most land forms).

In protozoon, the thrust is derived from a change in the body shape in forming pseudopodia (Amoeba) (Fig. 7.4), beating movement of cilia (Paramoecium) (Fig. 7.5) and contraction of contractile fibres (Monocystis). In cnidaria, body flexion and beating movement of the tentacles lead to the same result. 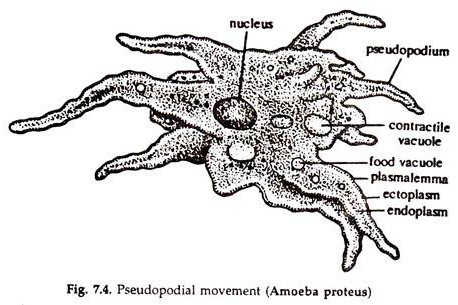 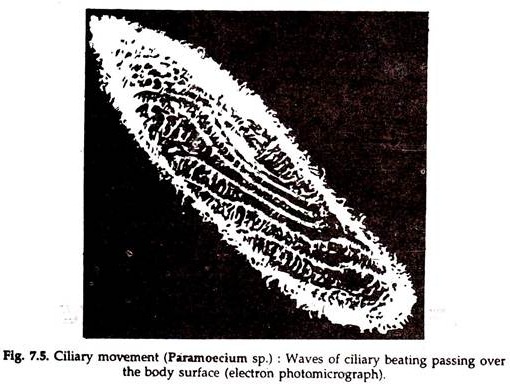 In the second step, the setae in the anterior part are anchored; those of the posterior part released; the contraction of longitudinal muscles also increases the coelomic pressure, the circular muscles are stretched, leading to the shortening of the body and the animal moves forward.

In echinoderms, the muscular contraction of the ampullae of the water vascular system creates a hydrostatic pressure and forces the tube feet to elongate. The tube feet are fixed to the substratum, muscular relaxation causes the fall of pressure, the tube feet shorten and the animal moves forward with a jerking fashion.

Muscles work only in contracting and against antagonistic forces. All muscles are not attached to hard structures or bones. Such structures are foot muscles of molluscs and all smooth muscles.

In organised invertebrates and in all ver­tebrates, the thrust for movement and loco­motion is derived from contraction of the muscles.

Fishes are animals with primary aquatic adaptation. The musculature in fishes is some­what different from that in tetrapod’s, prima­rily adapted for land life. Most of the somatic muscles in fishes are segmentally arranged (myomeres) (Fig. 7.6). 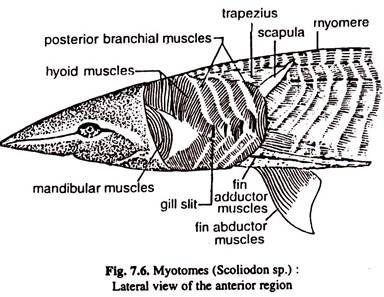 The movement in fishes and in some aquatic vertebrates is effected by lateral undulations of the body and the tail (Fig. 7.7), the latter being in the same long axis with that of the body. The segmental arrangement of muscles in fishes is most efficient for the purpose. The paired fin mus­cles are simple and consists of a dorsal abduc­tor muscle to pull the fin up and a ventral adductor muscle, to pull the fin downwards. 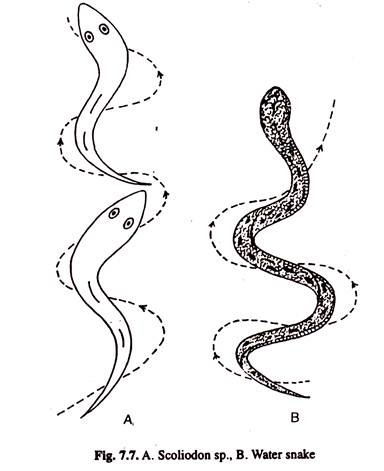 In terrestrial forms, the segmental nature of the trunk muscles was almost lost. The single abductor and adductor muscles in the fins of the fishes have divided into a number of muscles and became large and strong (Fig. 7.8). The latissimus dorsi and triceps what tough in some annelids and arthropods evolved from fish abductor and pectoralis and biceps from the adductor. 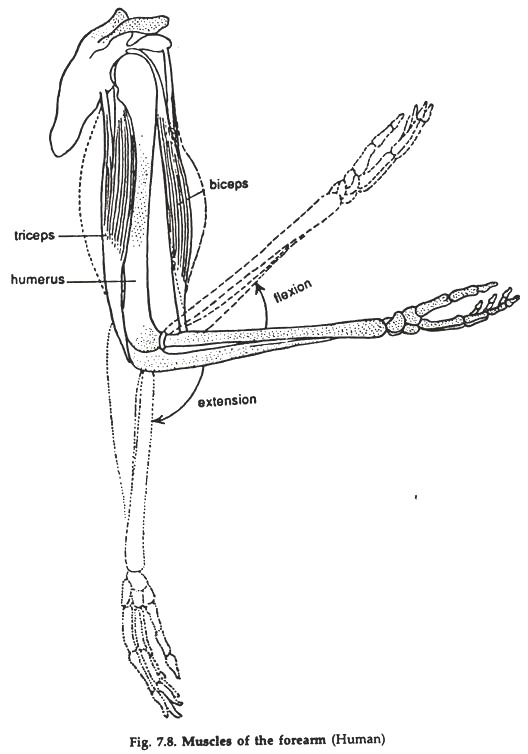