In this article we will discuss about the representative types of turtles with the help of suitable diagrams.

The term turtle usually includes the aquatic and semiaquatic forms, tortoise includes the land forms and terrapin is used for some edible freshwater species. The characteristic of chelonian organisation is the shortening and broadening of the body, together with the development of bony plates, forming a box into which the head and limbs can be withdrawn.

These plates are ossifications in the dermis, attached to the vertebrae and ribs. The plastron is developed from the expanded dermal bones of the pectoral girdle together with dermal ossifications. The whole is covered in most chelonians by rows of special smooth epidermal plates forming the “tortoise” shell. A new and larger layer is added to each of these plates each year, thus, making a number of “growth rings” from which age of the tortoise can be calculated, though the outer layers often become rubbed off.

The limb girdles lie inside the encircling ribs. The pectoral girdle’s scapula meets the carapace dorsally and carries a long acromial process and a backwardly directed coracoid, both being attached by ligaments to the plastron. The ilia are attached to two sacral vertebrae. Limbs are stout and with five digits. In marine turtles they are transformed into paddles.

The heart has a muscular sinus, separated auricles, a partly divided ventricle and two equal aortic arches. Lungs are spongy attached to the dorsal surface of the shell, sometimes enclosed in a separate pleural cavity (Testudo).

Some aquatic forms (Emys) also respire by taking water into special vascularised diverticuli of urodaeum. The metabolism of tortoises is low and they can remain for long periods without breathing. For this purpose they obtain energy by anaerobic glycolysis. Further, the tissues including the brain are unusually tolerant of anoxia. In temperate climates all species hibernate regularly.

The kidney is metanephric and the nitrogenous waste vary between urea and uric acid. Cloaca is typically subdivided and reabsorption of water occurs in cloaca to form a solid whitish excretory product. In male the copulatory organ is single. A female may lay 10 clutches of 100 eggs in a year Turtles all come ashore to breed.

The marine Chelonia mydas (green turtle) make migrations of more than 1500 km, perhaps by sun compass. They place their eggs carefully in holes made by scooping away the sand with the hind feet and then the traces are covered. Geochelone gigas, the giant tortoise of the Aldabra Islands, also digs a nest for its eggs.

Chelonian history starts back from the Triassic. Proganochelys (Triassochelys) was an early turtle, with a shell like that of modern forms, but still possessing teeth on the palate. The head, tail and limbs could not be withdrawn into the shell and were protected by spines. In later evolution Pleurodira, retraction of head became possible. In side-neck turtle, the neck is folded sideways.

These include terrestrial animals, such as Testudo graeca and T. imarginata tortoises of Southern Europe, the freshwater tortoises such as Chrysemys and other American terrapins; and Emys, the European water tortoise. Trionyx gangeticus is found in rivers of North India and T. laithi in South India. Chelydra serpentina (snapping turtles) and Macrolemys (alligator turtles) are carnivorous feeding on fish, frogs, water-fowls, etc. Chrysemys picta (painted turtle or terrapin) feeds on insects.

Malaclemys (diamond-back terrapin) is used as food by man. Kachuga found in Indian rivers have carapace with spinous plates. Chelodina longicollis (side-necked turtle of Australia) has a S-shaped folded neck. Chelus (mata-mata) of America and Africa is a curious side-necked freshwater turtle. Testudo is a common land tortoise. Testudo abingdoni (giant land tortoise) of Galapagos islands and Indian Ocean islands weighs over 100 kg and its age varies from 200 to 400 years.

Chelone mydas (Fig. 24.2) is a marine form commonly called green turtle. It is edible and is found in Indian, Pacific and Atlantic Oceans. Forelimbs form wing-like paddles with only a single claw found on the first digit of the paddle, digits are not visible externally, hindlimbs are clawed. Head and neck are not completely retractile, jaws have denticulate edges. 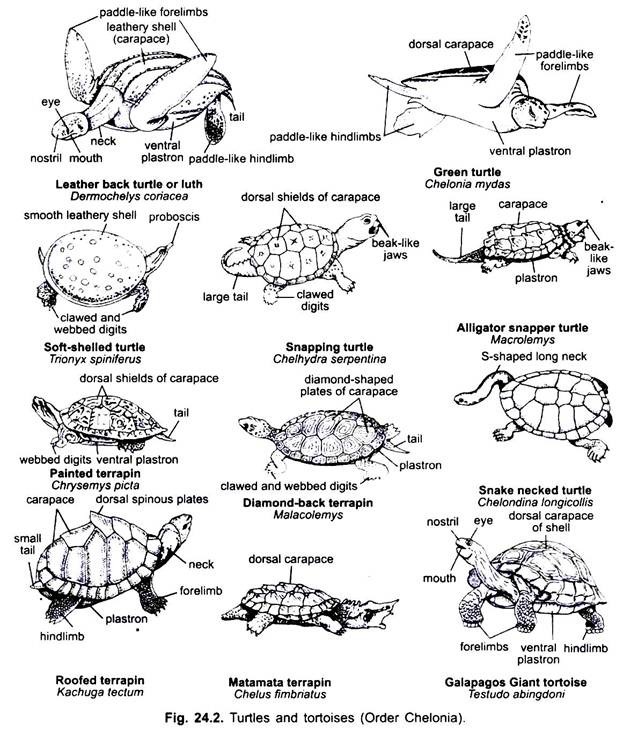 It lives mostly on seaweeds but also eats fishes. It comes ashore for breeding and lays up to 200 eggs. Chelone mydas and Chelone virgata are found in the Bay of Bengal, the upper surface is marbled olive and the lower is pale yellow. In the plastron there is an intergular scute between two gulars.

Testudo is commonly called land tortoise. It has a wide distribution in tropical and temperate regions of Asia, Africa and Europe. It is terrestrial, diurnal, and herbivorous though at times it also feeds on worms and insects. It hibernates underground in cold weather.

It is about 30 cm long, the males being smaller than females. Carapace is very convex with no nuchal plate, plastron is concave, on the shell are large yellow stars both on central and marginal scales. Tortoises are turtles which have become adapted for terrestrial life, they can live without water for long periods.