The Ostracodermi is divided into 2 subclasses and 5 suborders which are as follows:

A single, large, slit-like median nostril on the top of the head between the eyes.

The Monorhina has been divided into three orders:

Silurian. This order is represented by a single genus and species Jamoytius kerwoodi, which was previously placed under order Anaspida by Stensio and Ritche (1960). Newth regarded it as ammocoete larva of an ostracoderm, discovered in the Silurian strata of England. Jamoytius kerwoodi measures about 18 cm in length. It had a very primitive body construction. The body was unarmoured, fusiform with a blunt head. The two lateral folds and a median dorsal fin, notochord and muscle myotomes were exactly like those of Branchiostoma. No gill-slits. Regarded as an ancestor of ostracoderms.

This order includes the small fish-like ostracoderms. The fossils were recorded from Silurian to Devonian period. Body small about 15 cm long. Head naked or covered by a complex of small plates. Arrangement of scales was complicated. In the trunk region, the scales were oriented in longitudinal rows. Mouth was terminal. Eyes laterally placed. Nostril single median. Paired appendages were represented by a pair of pectoral spines.

These fishes were recorded from Silurian to Devonian period. The head was expanded, dorsoventrally flattened and was covered by a thick continuous cephalic shield (carapace) which was prolonged laterally into two lateral horns. The surface of the carapace was ornamented with spines and tubercles. 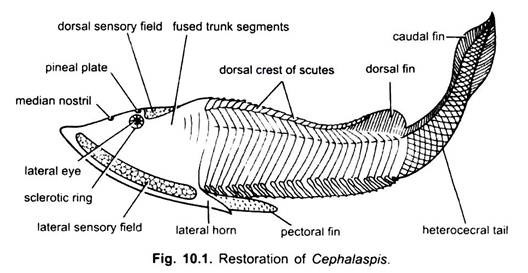 Two separate nasal openings, where known, are given below:

The members of this order were heavily armoured ostracoderms of middle Ordovician to Devonian periods. Body large. Head was flattened and was protected by a bony cephalic shield. The fins were absent. The tail was laterally compressed, covered with small scales, hypocercal. Mouth slit-like aperture. Anterior portion of the snout is prolonged into rostrum.

Lateral eyes widely separated. A single large gill-slit on each side. No sign of sensory organ. Lateral line was distinct. A backwardly directed dorsal spine projected upwards from the posterior part of the cephalic shield. The trunk was covered over by rectangular scales. Hagfishes (Myxiniformes) were probably derived from Heterostraci. Examples: Pteraspis (Fig. 10.2), Drepanaspis.

The members of this order were found from Ordovician to Devonian periods. Body was small (10 to 12 cm long) and fusiform or torpedo-like. Surface of the body was covered by numerous minute placoid scales like denticles. Tail hypocercal or heterocercal. Lateral eyes widely separated, Broad flangs project anterolaterally from body.