Different authors have classified Class Amphibia with their own conception. Parker and Haswell divided the class into eight orders, five extinct and three living. It has been customary to place the extinct orders together in a subclass Stegocephalia (Adam Sedgwick) and all living groups in Lissamphibia. G. Kingsley Noble (1924) classified class Amphibia into six orders, 3 orders of extinct and 3 orders of living. The classification followed under these lines is of G. Kingsley Noble (1924).

Stegocephalia are extinct lizard-like or salamander-like Amphibia. Dorsal surface of skull is completely covered by dermal bones. A parietal foramen is present between the parietal bones. Limbs pentadactylous. Skin with scales and bony dermal plates. Appeared in Lower Carboniferous to the Upper Triassic in which they disappeared. 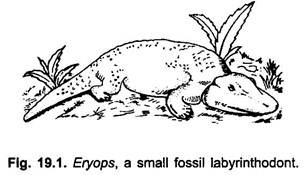 1. These were crocodile or salamander-like fish-eating Amphibia.

2. They lived from the Lower Carboniferous to the Triassic period.

3. They had a skull completely roofed over with bones.

4. Many more bony elements were present in their skulls than occur today in the modem Amphibia.

5. Enlarged teeth with greatly folded dentine found in both the jaws, similar to their crossopterygian ancestors.

6. Many species were aquatic or semi-aquatic but others may have been terrestrial.

1. They were small, salamander-like Amphibia. Found in the Carboniferous and Permian deposits.

3. The skull roof had a separate quadrato-jugal and a lacrimal. Presence of a preopercular bone showing traces of fish ancestry.

4. Vertebrae tubular with spinal cord and notochord lying in one cavity.

7. A clavicle, cleithrum and scapula were present but the coracoid remained cartilaginous.

2. Vertebrae were single rings around the continuous notochord.

3. Ribs articulate with the column intervertebrally.

It includes modem Amphibia having small, simple teeth and no dermal bony skeleton.

3. Limbs, girdles and tail are absent.

4. The skin is provided with numerous transverse grooves or wrinkles.

5. Minute scales are found embedded in the grooves of the skin in some forms.

6. Copulatory organs are present in males.

2. Limbs are of equal size and usually weak.

3. Gills permanent or lost in adult and gill- slits in the adult.

4. Skin devoid of scales and tympanum.

5. Teeth are present in both the jaws.

7. Larvae are aquatic like adults or resemble adults in form and with teeth.

3. Skin is soft and flabby.

5. Gills are absent in adults.

2. Palatal teeth present in transverse rows or converge across the posterior margins of vomer. Parasphenoid toothless.

1. Eyelids are present or absent.

2. Usually either gills or lungs are present but in some forms respiration by skin.

4. External gills (3 pairs) are well developed and persist throughout life.

1. Body is short and broad.

2. Head and trunk are fused. Neck and tail are absent.

3. Forelimbs are short, while hindlimbs are long.

4. External gills or gill-slits are absent. Respiration is by lungs.

3. Free ribs either in larva or adult.

2. Sacral vertebrae are fused with urostyle.

1. Vertebrae are procoelous, without ribs.

2. Urostyle articulates with the last vertebra by two condyles.

3. Sacral vertebra acoelous and bears two condyles posteriorly for the attachment with the urostyle.