In amphibians there are many devices for the protection of the eggs during the early stages of development and the youngs. In this way nature has practised economy in the number of eggs, which varies in direct proportion to the chances of destruction. Parental care is the care of the eggs or the youngs until they become able to protect themselves from the predators.

These devices fail under two heads:

(1) Protection by the parents by means of nests, nurseries, or shelters and

(2) Direct caring or nursing by parents.

The different modes of protection are given below in the three important orders of class Amphibia.

1. Protection by Means of Nests, Nurseries and Shelters:

A number of different species of frogs and toads construct nests or shelters of leaves or other materials in which the eggs are deposited and the youngs are developed.

A. In Enclosures in the Water (Mud Nests):

A large tree frog (Hyla faber) known in Brazil as the “Ferreiro”. It protects its progeny by building a basin-shaped nest or nursery in shallow water on the border of the pond. The female scoops mud to a depth of 7.5 or 10 cm and with the mud, thus, removed a circular wall is built around the nest, which emerges above the surface of the water.

The inside wall is smoothened by the flattened webbed hands and the bottom is also levelled by belly and hands. The eggs and early larvae are, thus, protected from predators (insects and fishes, etc.) until they are able to defend themselves. Heavy rains later on destroy the wall and larvae go to the water.

B. In Holes Near Water (Foam Nests):

A still better mode of protecting the offspring during the early stages of development has been adopted by a Japanese tree frog Rhacophonis schlegelii. The male and female in embrace bury themselves in the damp earth on the edge of ditch or flooded rice field, and make a hole or chamber, a few centimetres above water level. The walls of this chamber are polished and during this process the gallery by which they enter into that chamber gets obliterated and then oviposition begins.

The female first produces a secretion from cloaca which is beaten into a froth. The eggs are deposited into the froth. Now the inactive male impregnates them, and then both of them separate and make an exit gallery towards the ditch. It is obliquely downwards towards the water, later on this is used by the larvae who come to the water to complete the development.

The bubbles collapse, the froth liquefies and this liquid acts as an efficient vehicle for transporting the larvae down the tunnel into the water. Similarly female of South American tree frog, Leptodactylus mystacinus stirs up a frothy mass of mucus which is filled up in holes near water and then eggs are laid in it. The tadpoles from these nests easily enter water. Some anuran females discharge huge mucus and beat it into a foam with their hindlegs and then eggs are laid. Later on hatching tadpoles drop into water from the foam.

Some tree frogs like Phyllomedusa in South America, Rhacophorus malabaricus in India, and Chiromantis in tropical Africa glues the eggs to foliage hanging over water, and after hatching, the tadpoles drop straight into the water. Hyla resinfictrix (tree frog) lines a shallow cavity of the tree by bees wax brought from the hives of stingless bees. Eggs are laid there when it is filled with rain water. Tadpoles develop here safely.

Autodax (Urodela) lay 10-20 eggs in a dry hole in ground or in a hole on a tree, up to 10 metres above the ground. Both parents remain in the hole to protect the eggs and larvae and also provide them moisture. Youngs remain within the hole for a considerable period with their parents.

The eggs of Phtynixalus biroi are large which are enclosed in sausage-shaped transparent common membranous bag secreted by the female and is left in the mountain streams. The whole development takes place within the eggs and little frogs go out in perfect condition. No gills have been observed and the large tail serves as a breathing organ of young ones. Salamandrella keyserlingi (urodele) deposits its small eggs in a gelatinous bag which is attached to an aquatic plant below the water level.

E. On Trees or in Moss away from Water:

Several species of tropical American genus Hylodes lay their large eggs in damp places under stones or moss or plant leaves. The metamorphosis is hurried up within the egg. Due to plenty of yolk in the egg the entire development takes place within the egg and young frogs hop out as an air breather with a vestige of tail.

2. Direct Nursing by the Parent:

A. Tadpoles Transported from One Place to Another:

Small South American frogs Phyllobates and Dendrobates and tropical African frogs Arthroleptis and Pelobates lay their eggs on ground. The hatched tadpoles adhere by their sucker-like lips and flattened abdomen to the back of one of their parents and, thus, they are carried from one place to the other and in this way they can even go from one pool to the other and this is particularly when one pond is to dry up.

B. Eggs Protected by Male:

The eggs (17 in number) of Mantophryne robusta are strung together by an elastic gelatinous envelope forming a clump over which the male sits for development. It may be outside water .The larvae have no gills, well developed legs, large tail which is vascular and respiratory.

C. Eggs Carried by the Parents:

In Obstetric toad (Alytes obstetricans) of Europe, the male winds the strings of eggs-formed by adhesion of their gelatinuous investment-round his body and hindlegs. Here they are retained until the tadpoles are ready to be hatched.

In Desmognathus fusca (urodele) the eggs are laid in the form of rosary-like strings. The string is bound round the body and the female nourishes them at a comparatively dry spot.

D. Eggs in Back Pouches:

In a Brazilian tree-frog, Hyla goeldii, the female carries the eggs on the back within an incipient brood pouch in which the eggs remain exposed. How they reached there is not known but probably male does it. In Nototrema also the eggs are placed over the back in a single large brood pouch covered by the skin and opened posteriorly in front of cloacal aperture.

In Pipa americana (Surinam toad) the eggs are carried on the back of the mother. In breeding season the back skin of female becomes thick, vascular, soft and gelatinous. The male places and spaces the eggs. Each egg sinks into a small pouch, over which develops an operculum, which comes from a remnant of the egg envelope, reinforced by integumental secretions.

Thus, the young develop moist and safe in maternal tissue. Between the invaginated pits arises a rich vascularisation. In each larva there develops a broad and vascular tail. It is suspected that metabolic exchanges take place between maternal and embryonic tissues in the manner of a primitive placenta. The larva does not develop gills, and has been reported to be born as a tadpole about eighty days after egg-deposition.

E. In the Mouth or Gular Pouch:

In Rhinoderma darwini, small South American frog, the eggs (few and large) are transferred by the male to the relatively immense vocal sacs that extend over its ventral surface. There the eggs develop. In Arthroleptis, male frog keeps the larvae in his mouth.

The female of a West African tree-frog, Hylambates breviceps, carries the eggs in her mouth. Female Rheobatrachus silus (Australian frog) keeps her eggs in her stomach. The tadpoles are expelled through mouth after metamorphosis. 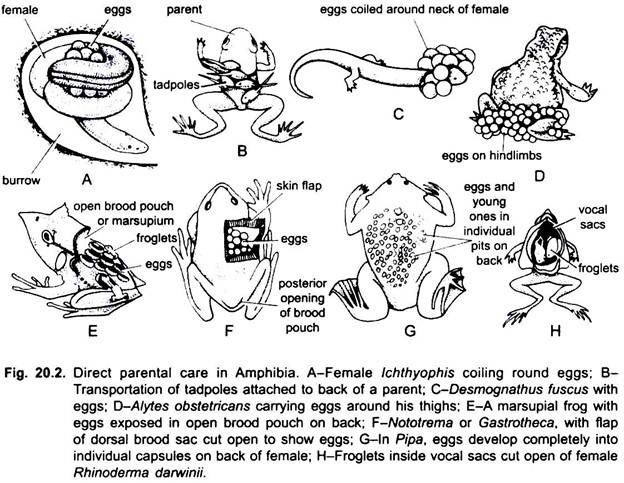 Coecilians Ichthyophis and Hypogeophis are oviparous, lay eggs in burrows in damp soil and coil round them until they hatch.

Two small East African toads, Pseudophryne vivipara and Nectophryne tornieri, are known to be viviparous, but no observations have yet been made on them beyond the fact that larvae are found in the uteri. Caecilians like Typhlonectes, Geotrypetes, Schistometopum, Chthonerpeton, Gymnopis are ovoviviparous.