In this article we will discuss about the origin of amphibia with the help of suitable diagrams.

During the late Devonian period osteolepid fishes such as Eusthenopteron lived in the freshwater systems. It is supposed that some of these animals, first crawling from pool to pool and then spending more time on the land, gave rise to the terrestrial Amphibia.

They already possessed lungs and stoutly-constructed fins. The pace of evolution was very slow as it is known that the Devonian Amphibia, and also many of the Carboniferous Amphibia, still looked and behaved very like fishes. Nearly all of these early amphibians were wholly or largely aquatic, feeding on fish or aquatic invertebrates. The crocodile-like forms such as Eryops and small terrestrial amphibians such as Cacops were evolved not before Permian. 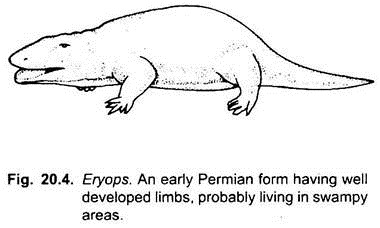 The fossils that appear to be closest to the possible tetrapod ancestor are the osteolepids of the Lower and Middle Devonian periods about 375 million years ago. They were definitely fishes. They may have used air as well as water for obtaining oxygen, as do modern lungfishes. Elpistostege is a single Upper Devonian skull which is intermediate in proportions between such fishes and the earliest undoubted tetrapods, Ichthyostega and similar forms found in freshwater beds of Greenland. They belonged to late Devonian or early Carboniferous, about 350 million years ago.

They are the oldest members of Labyrinthodontia having teeth with folded dentine. The enamel and dentine surrounding the pulp cavity at the base of tooth was folded into a labyrinthine pattern. They were all fish eating. This condition was also present in their crossopterygian fish ancestors.

Throughout the succeeding 100 million years of the Carboniferous and Permian periods they flourished and developed many different lines, one giving rise to the reptiles. They were mainly aquatic or semi-aquatic forms, and only a few seem to have been completely terrestrial. 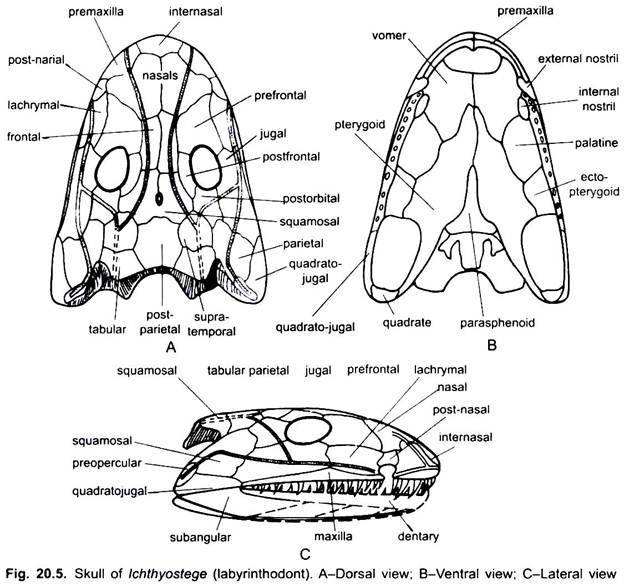 The earliest labyrinthodonts were definitely tetrapods and showed sharp changes from the fish type. Some had scales, while others had a dry leathery skin. The ventral side of body was sometimes protected by ventral plates.

In Ichthyostega the skull shows amphibian features but retains traces of fish ancestry in its shape, with a short, wide snout and long posterior region, and presence of a preopercular bone. The nostril lies on the edge of upper lip. Gills and operculum were absent. These creatures were about 100 cm long and possessed a long tail with a dorsal fin, but had strong legs.

In the earliest Palaeozoic Amphibia (Ichthyostegalia) the vertebrae were like those of crossopterygian, composed of three parts, a dorsal neural arch and a centrum of two parts—anterior intercentrum and posterior pleurocentmm.

The intercentrum carries a ventral arch and rib. In many other aquatic amphibians the vertebrae are reduced to simple cylinders of bone surrounding the persistent notochord, a condition called lepospondylous, which is found also in modem forms.

Loxomma, a Carboniferous Amphibia, were probably largely aquatic. Later members such as Eryops and Cacops of the early Permian had stout legs and were probably able to live in swamps or on firm ground. Palaeogyrinus of the Carboniferous (earliest members) were close to the ancestry of all Amphibia. These were largely with small legs and long tail, and vertebrae retained both pleurocentrum and intercentrum, the two-ringed condition.

The later Permian Amphibia such as Seymouria were entirely terrestrial as adults, although young had lateral line canals, indicating an aquatic larval stage, justifying the placing of these forms in the Amphibia. They had strong limbs, and skull had intertemporal bone (absent in reptiles). The limb girdles resemble those of reptiles, with a coracoid bone and broad ilium. The phalangal formula was the reptilian one of 2, 3, 4, 5, 3 (or 4), not usual in Amphibia. Seymouria is clearly intermediate between Amphibia and Reptilia.

Lepospondyli includes Carboniferous and Permian amphibians in which the vertebrae were single rings around the continuous notochord.

(1) Ophiderpeton and other forms from the Carboniferous were like snakes and had lost their limbs.

(2) Diplocaulus from the Permian possessed homed skulls. These animals had broad flat heads and upwardly-looking eyes and small limbs were secondarily aquatic carnivores, with long bodies and vertebrae adapted for bending movements.

(3) Microbrachis had more normal limbs and bodies. Some were aquatic, others fully terrestrial, some used burrows and might have been the ancestors of the Apoda.

The modern forms are generally considered to be a single monophylatic group, but this is not certain and their relationship to the Palaeozoic Amphibia is unclear. They show flattening of the skull and loss of ossification in the roof and the palate. The vertebrae are simple ring-like those of temnospondyls (e.g., Loxomma, Eryops, Cacops). The earliest known anuran Protobatrachus (= Triadobatrachus) from lower Triassic has a frog-like skull but many vertebrae with ribs, and a segmented tail.

The ilia and torsal bones are long. The urodeles are superficially more like early amphibians. Fossil salamanders of Jurassic resemble modem forms. Jarvik (1980) has suggested their origin from the fish Porolepis which is supposed to have an internal nosfril. Fossil apodes are not known, but their retention of scales suggests an early separation from the rest and they may be derived from the lepospondyls rather than from labyrinthodonts.