The origin of reptiles is well suited to maintain life on land. Many features show a considerable advance in this respect over the Amphibia.

(i) Dryness of the skin,

(iii) Devices for economising the use of water.

Reptiles have a dramatic evolution. They had an obscure beginning in the Palaeozoic, they enjoyed a dominant status in the Mesozoic and then in the Coenozoic they faded out of scene.

The labyrinthodonts possessed characteristically folded or labyrinthine teeth, similar to their crossopterygian ancestors. They flourished through Carboniferous and Permian periods before extinction in Triassic. We cannot, however, point out to a single ancestor of reptiles. Probably they arose polyphyletically along a dozen or more independent lines.

During Carboniferous period of late Palaeozoic Era, about 250 million years ago, some labyrinthodont amphibians gradually took on reptilian characters. These earliest reptiles are called the stem reptiles. They belong to the order Cotylosauria of the subclass Anapsida. The transition was so gradual that often it is difficult to decide whether some fossil skeletons are those of advanced amphibians or primitive reptiles. They were contemporary of the primitive amphibians of late Pennsylvanian and early Permian times. In the later part of the Permian, however, the amphibians were outnumbered by these reptiles.

One of the members of the Cotylosauria was Seymouria (Fig. 25.1) found in the Lower Permian sediments in Texas (U.S.A.), perhaps 250 million years old. It was a lizard-like animal about 60 cm long, with a comparatively thick body, relatively small pointed head with dorsally placed nostrils, and a short tail. It had a few reptilian features like anapsid skull, single occipital condyle, large parietal eye and five digits. Structure of Seymouria was intermediate between the amphibians of that time and the early reptiles. 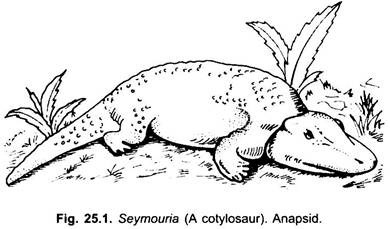 Seymouria leads us to certain logical conclusions. It is not directly ancestral to all reptiles. At the time it was living, the reptiles had already been present for some 50 million years. It is so perfectly intermediate between an amphibian and a reptile that its true position remains uncertain. Romer treats it as a reptile under the order Cotylosauria, whereas others classify it with primitive Amphibia under the order Seymouria-morpha. Perhaps Seymouria is a connecting link between Labyrinthodontia and Cotylosauria.

Limnoscelis was a genuine reptile from the late Carboniferous or early Permian of New Mexico. Romer (1946) critically studied the Limnoscelis and suggested that Limnoscelis, a Captorhinomorph Cotylosaur, is the primitive reptile. Limnoscelis was about 5 feet in length, some half of which was made up by tail, with an elongated body, low slung on short stubby legs which sprawled outward from the sides.

Like Seymouria, it was also aquatic in habitat. Its skull was of anapsid type and was compressed from side to side and dorsoventrally flattened. The otic notch present in Labyrinthodonts had disappeared leaving an indication at the back of the skull in the region of its closure.

The premaxillary teeth were enlarged and overhung the front teeth in the lower jaw, which is one of the most common specialisation of early reptiles but seldom seen in amphibians. Other members of the primitive reptiles are Captorhinus and Hylonomus.

Diadectes was contemporary to Limnoscelis, but the didectomorphs represents different evolutionary line from Limnoscelis. The didectomorphs retained the otic notch at the back of skull. Diadectes had developed a specialised dentition. The front teeth were chisel-shaped and back teeth had broad ridged crowns.

The first really large reptiles to make their appearance in the later Permian were the Pareiasaurus, related to Diadectes. These lumbering animals ran to spiny excrescences on the head and spiny armour of bony plates along back, which was presumably a defence against carnivorous mammals like reptiles.

It is clear that the Cotylosaurs were, broadly speaking, ancestral to all reptiles. Some workers including Watson believe that these Cotylosaurs separated into two divergent evolutionary lines. One of these lines is represented by Captorhinomorph (suborder) of which Limnoscelis was primitive member, led to mammal-like reptiles and ultimately to mammals and has been termed theropsida. The other line, the Sauropsida, however, is represented by Didectomorph Cotylosaurs, the remaining reptiles and birds. In this group the otic notch tends to persist.

Although, the authorities have not yet agreed, as at what precise stage of evolution these two Theropsida and Sauropsida lines separated from one another. It seems clear, therefore, that the modem reptiles are not intermediate in the evolutionary sense between amphibians and mammals. And to find out a common ancestor for a creature like a lizard and a mammal, one has to go back to an ancient reptilian or possibly to an amphibian, according to Watson.

One of the many features that make the study of reptiles interesting is what Osborn has called adaptive radiation. By the term adaptive radiation is meant the differentiation of animal form and construction which, form a common starting point, follows lines of adaptations in diverse directions in response to the different needs demanded by different kinds of environment.

The ancient reptiles gave trials to all sorts of haunts and ways of living. Some of them like Pterosaurs became aerial, Ichthyosaurs and Plesiosaurs were aquatic. Amphibians were the Sauropod Dinosaurs. Cursorial adaptation was shown by many Dinosaurs. It is assumed that some of the Mesozoic reptiles became adapted to fossorial and arboreal life.

Adaptive radiation is a dynamic aspect of animal existence and as animals branch out into each available environment, they assume characteristic adaptations to meet their specific needs—a fact noticeable in the modifications associated principally with locomotion. The noteworthy feature in the radiation of reptiles is the fact that most of their adventure, specially on land, was successful as there was no vertebrate competitor. 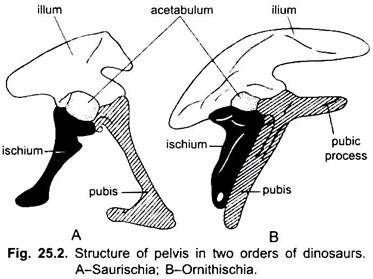 The stars amongst the extinct reptiles were undoubtedly the Dinosaurs and the age of reptiles often is called as the age of Dinosaurs. At the end of Triassic, Thecodontia or Pseudosuchia, the early descendants of Archosauria, gave rise to the most fantastic Mesozoic reptiles, the Dinosaurs which means “terrible lizards” (Gr., dinos = terrible + saurus = lizard). They subdivided early into two orders: Saurischia and Ornithischia, depending on the structure of their pelvis (Figs. 25.2 and 25.3).

Saurischia had a reptilian triradiate pelvis with pubis entirely separate and anterior to ischium. The early Saurischians were bipedal with short forelimbs, and four or five clawed digits, they progressed on land with hindlimbs. Some of the later forms became quadrupedal and herbivorous.

The bipedal carnivorous forms comprise the suborder Theropoda Suborder Theropoda included all flesh-eating and bipedal carnivores. Smaller Cretaceous ostrich-like forms, such as Struthiomimus and Ornithomimus, walked on 3 toes of large hindfeet. Their forelimbs also had 3 fingers, of which one was opposable like a thumb and used for grasping Jurassic Allosaurus, a monster carnivore, was 10 metres long. But the largest and the that ever walked the face of earth was Tyrannosaurus rex from Cretaceous of North America. It was 15 metres long and stood 6 metres high. Its head was disproportionately great with large jaws armed with dagger-like teeth 15 cm long.

The 3-toed massive hindlegs were adapted for running, but extremely short forelimbs were almost useless. Suborder Sauropoda included huge herbivorous quadrupedal dinosaurs. Some of them were the largest and heaviest of all terrestrial and amphibious vertebrates that ever lived.

Apatosaurus (= Brontosaurus) Diplodocus, and Branchiosaurus were enormous Jurassic reptiles, each more than 25 metres weighing over 50 tons. They probably lived in swamps where their body would be supported partly by the buoyancy of water. They had long necks and tails, small head with exceptionally small brains and weak jaws.

Ornithischia are bird-like dinosaurs. They had a typical tetraradiate bird-like pelvic girdle with pubis directed backwards parallel to ischium. They were all herbivorous; some of them became quadrupedal. A good many of them developed horns and protective plates on their body. Bipedal Iguanodon (Lower Cretaceous) grew to 10 metres. Its sharp dagger-like thumb was probably used for defence. Quadrupedal Stegosaurus (Jurassic) measured 8 metres and weighed 10 tons.

Forelimbs were much shorter than hindlimbs. Skull was much small and brain much smaller than the lumbar swelling of spinal cord. It had a parapet of heavy triangular plates on its neck, back and tail. The tail was also furnished with formidable sharp spikes or spines. Triceratops (Late Cretaceous) was 6 metres long and stood 3 metres high and had quadrupedal gait. Its enormous head carried 3 huge horns projecting from a large bony frill or collar projecting the vulnerable skull (Fig. 25.3). 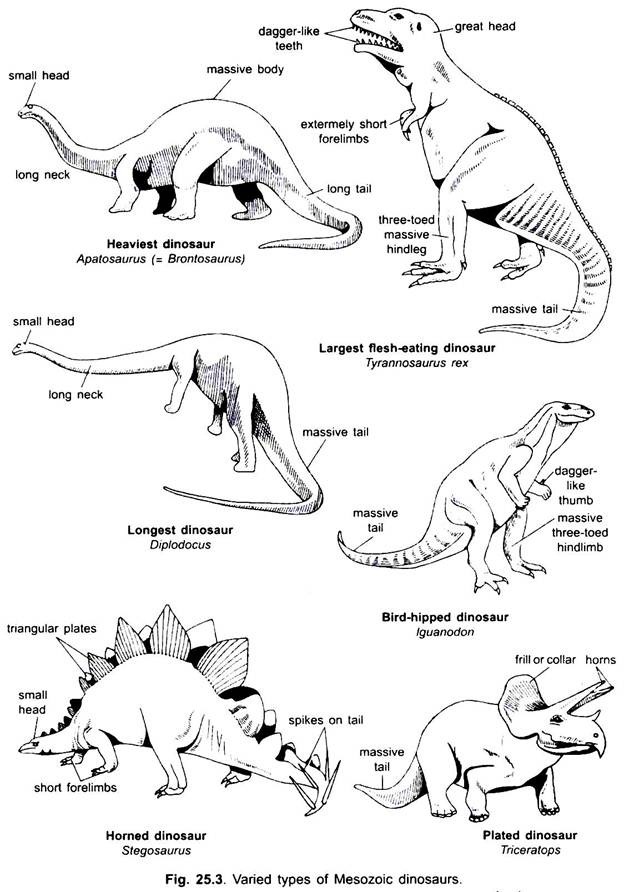 Dinosaurs had a majestic rise and a dramatic fall. After thriving and dominating the earth for 130 million years, the great dinosaurs and their contemporaries became suddenly extinct by the end of Cretaceous period. The extinction of this mighty race which underwent an explosive evolution is still a matter difficult to explain.

Various factors have been suggested for their total extinction such as catastrophism, epidemic, food poisoning, racial senescence, climatic changes, over-specialisation, interspecific warfare or competition with ancestral mammals. None of these has been accepted as being completely satisfactory. Probably combinations of several factors are responsible for their extinction.

Now Dr. T. Swain of the New Royal Botanical Gardens in Britain says that dinosaurs were poisoned and murdered in cold blood. According to Dr. Swain it was nature which killed the reptiles by introducing into their diet a new class of plants containing aromatic type of alkaloids”. In support of his theory Dr. Swain says there is evidence of increasing physiological trouble in dinosaurs towards the end of their reign.

He further said that there was an increase in the size of their hypothalamus and certain dinosaur fossils have been found in contorted positions suggestive of alkaloid poisoning. Dinosaurs were victims of changes in the ecological relationships between them and plants. Such changes hold the real key to the nature of extinction and to the whole evolutionary process. Dr. Swain goes on to say that demise of dinosaurs is a lesson which all animals including ourselves should heed.