During Mesozoic era, the age of reptiles (dinosaurs), mammals were small, generalised and rare. By the end of Mesozoic or beginning of Coenozoic, the dinosaurs vanished and mammals suddenly expanded into varied evolutionary patterns. Early in Cretaceous period, placental mammals became distinct from marsupials.

During Eocene and Oligocene, most of the orders of mammals originated moving into habitats and ecological niches vacated by the extinct dinosaurs. This evolution from a single ancestral species to a variety of forms which occupy different habitats is called adaptive radiation or divergent evolution.

The concept of adaptive radiation in evolution was developed by H.F. Osborn in 1898. Examples often given as evidence include Darwin’s finches of the Galapagos Islands, varied limb structure of mammals, Australian Marsupials, etc.

Figure 33.10 shows adaptive radiation in mammals. It is based on limb structure.

A. Radiation in Limb Structure of Mammals:

Mammalian limbs are the modifications of the pentadactyl limb. Primitive, ancestral mammals are believed to have been short legged five fingered creatures living on the ground. Their limbs were not modified for any particular type of locomotion. These animals were terrestrial. These terrestrial ancestors formed the ancestors of modern mammals.

These mammals having primitive limb structure are placed in the centre of the figure 33.10. Therefore, adaptive radiation occurred in five different lines or habitats with modifications in their limb structure.

From these terrestrial mammals the different lines radiated in the following manner:

2. Another line leads to aerial representing mammals adapted for flight (e.g., bats) Only bats occupy the position at the terminus of this line, since they are the only truely flying mammals Somewhere along this line we can place for gliding mammals such as “flying squirrel. ”

3. Third line of radiation gave rise to cursorial forms (e.g., horses and antelopes). They have developed limbs suitable to rapid movements over the surface of the ground. Along this line also developed other mammals with less strongly modified limbs, such as wolves, foxes, hyaenas, lions.

4. Fourth line of radiation formed the burrowing mammals, the fossorial mammals. Some of the fossorial mammals, like the moles, have modified their forelimbs for digging but they are poorly adapted for locomotion on the ground. While others like pocket gophers and badgers are expert diggers but they have retained structures enabling them to move readily on the surface of ground.

5. Fifth line of radiation leads to the aquatic mammals:

(i) Whales and porpoises having limbs strongly adapted for aquatic life, but they cannot move about on land.

(ii) While seals, sea lions and walruses have also strongly modified limbs for aquatic life but they are also able to move about on land.

(iii) The third group includes accomplished swimmers such as others and polar bears which are equally at home in water or on land.

Thus, all the mammals of different radiating lines have limbs more or less adapted for some particular mode of locomotion. All the lines start from a common centre representing the short, pentadactyl limbs of terrestrial mammals. From the centre, evolutionary lines radiate out in various directions. Hence, adaptive radiation is evolution in several directions starting from a common ancestral type. 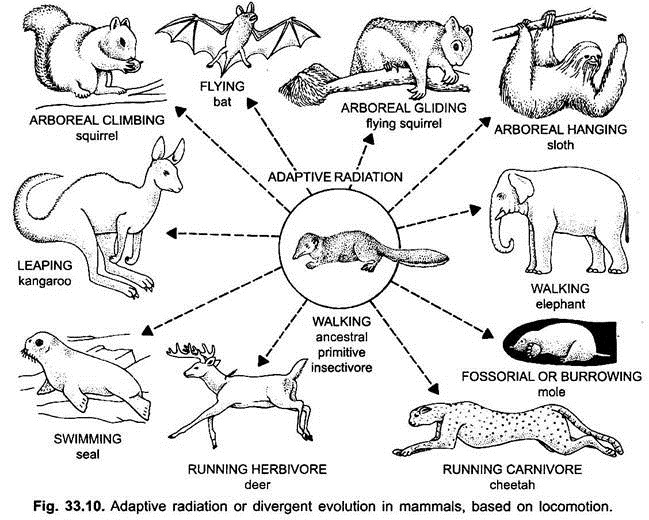 All the mammals included in the diagram have modified pentadactyl limbs, hence, they must be related to each other. Possession of this common limb pattern indicates close relationship not only among mammals but also by birds, reptiles and amphibians – by all vertebrates except fishes.

B. Tooth Radiation in Mammals:

The mammals with few exceptions (Cetacea, ant-eaters etc.) possess heterodont dentition, i.e., the teeth in contrast to those of reptiles, are differentiated into different forms with very distinct functions. The different types of teeth are incisors for biting, canines for grasping, tearing or for defence or offence, premolars and molars are for grinding. The premolars and molars show greatest structural modification for different types of food.

In insectivorous type (stem form in mammals), premolars and molars are low-crowned simple with few cusps, generally sharp pointed and suitable for crushing feeble prey. In carnivorous type, premolars and molars are high crowned, trenchant, shearing structures (carnassial). The jaws have little or no lateral movement. Cats have no grinding teeth, while dogs have more of grinders. In Odontoceli (e.g., toothed whales) there is no tooth differentiation and the teeth are practically alike.

Grinders (premolar and molars) may be short-crowned and brachydont adapted for succulent leaves and twigs, or long-crowned and hypsodont adapted for harsh grasses. In myrmecophagous type teeth have disappeared, jaws reduced and mouth opens at the extreme anterior end of tubular snout with a highly extensible and prehensile adhesive tongue for eating ants.