In this article we will discuss about the dentition in mammals with the help of a suitable diagram.

The hard and usually pointed structures connected to the jaw bones in the buccal cavity of vertebrates are known as teeth. The structure, kind, number and arrangement of teeth are collectively called dentition. Although teeth are found among fishes, amphibians and reptiles and are also known to have been present in ancestral birds, but they are most highly specialised in mammals.

Teeth are as a rule present in the foetal as well as adult conditions of mammals. In all such cases they are never found on the palatal bones but are present on the premaxillae, maxillae and mandibles and are, unlike those in most lower vertebrates, differentiated in form and function.

Teeth play an important role in everyday life of an animal.

The functions of teeth are as follows:

(i) The primary function of teeth is to grasp and hold the prey or food in the mouth cavity (buccal cavity),

(ii) Teeth are modified to serve as a grinding mill for chewing food.

(iii) Teeth may serve as weapons for offence and defence by working as tearing organs.

(i) Teeth are so characteristic of mammals that their classification is based largely on their dentition. Thus, study of dentition is important for taxonomic work on mammals.

(ii) The number of teeth present gives an idea of the approximate age of the mammal,

(iii) Study of dentition has helped in deciding the pedigree or ancestry of certain mammals.

Not all mammals possess teeth. In some monotremes, Echidna and in some American ant- eaters, however, they are entirely absent at any time. In some spiny ant-eaters (Tachyglossus) no teeth are found in any stage. A secondary toothless condition occurs in some mammals.

In whalebone whales foetal teeth are replaced before or soon after birth by baleen plates for straining the planktonic food. Although other ant-eaters, armadillos and certain other forms possess teeth, they are imperfect structures differing from typical mammalian teeth.

Morphologically, teeth can be distinguished into two types such as homodont and heterodont.

In vertebrates other than mammals, all the teeth present are similar in shape and size. They are said to be homodont or isodont. Among mammals only certain cetaceans have homodont dentition, i.e., teeth which are all similar in shape. Further the number of teeth in these homodont mammals varies between 2 and 200. In certain mammals such as toothed whales, dolphins, porpoises and armadillos, teeth become secondarily uniform or homodont.

Mammalian teeth are characteristically heterodont, i.e., dissimilar in shape, size and functions. The heterodont dentition commonly includes four kinds of teeth such as incisors, canines, premolars and molars. The differentiation depends upon the nature of food eaten and the manner of procuring or securing it.

The manner of attachment of teeth at their bases with the jaw bones varies throughout the vertebrates.

These are of the following three types:

This condition occurs in most vertebrates in which teeth are attached on the crest of jaw bone or attached to the free surface or summit of the jaw bone as in shark or frog. Such teeth are apt to break off easily but are replaced.

This condition occurs commonly in urodels and lizards. Teeth are attached to the shelf-like indentations on the inner margin of jaw bone by their bases as well as one side. Acrodont and pleurodont teeth are rootless, so that nerves and blood vessels enter the pulp cavity along lateral side at the base of the tooth. 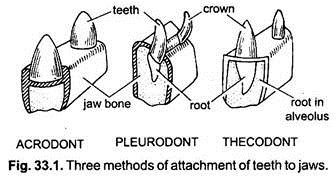 Thecodont type of teeth is found in some fishes, crocodilians and mostly in mammals. In this type the teeth have roots (one or more) and the roots are embedded in sockets called alveoli or theca of jaw bones, a crown projects above the socket.

In mammals the roots of thecodont teeth are longer, they may be open or closed below. In the open type the pulp cavity has a wide opening or root canal, such teeth continue to grow throughout life by addition of dentition, e.g., incisors of rodents, tusks of elephants. Most teeth are of the closed type in which the opening of the pulp cavity is very small and serves only for passage of blood vessels and nerves, such teeth do not grow after reaching a definite size.

According to their permanence or replacement (succession), teeth fall into three categories:

In most of the lower vertebrates, the teeth are being constantly replaced an indefinite number of times during life, i.e, successions are numerous and continuous throughout life. Such a condition is known as polyphyodont which is not found in mammals.

In most mammals, there are only two successions, i.e., teeth develop during life in two successive sets. This condition is known as diphyodont. Teeth of the first set are called deciduous, lacteal or milk teeth. They usually erupt after birth and they are replaced by permanent dentition.

In many mammals such as guinea pigs milk teeth develop and are lost before birth. Milk dentition has no molars included. Later, milk teeth are replaced in the adult by the permanent S which last throughout life. If lost they are not replaced. In cape ant-eaters or aardvarks, milk teeth outnumber the permanent teeth.

In some mammals such as platypus, marsupials, moles, sirenians, cetaceans (toothless whales), etc., only one set of teeth develops, known as monophyodont condition.