The below mentioned article provides a note on the Adaptive Radiation of Different Species.

The diversification of different species of a genus or different group of organisms of related species in different ecological or geo­graphical areas for survival is known as adaptive radiation. This adaptive diversifica­tion leads to the origin of new species.

In 1910 Osborn formulated a law of diversifica­tion. He stated that each isolated region, if large and sufficiently varied in its topogra­phy, soil, climate and vegetation, would give rise to a diversified fauna. The larger region with more diverse environmental conditions will give rise to greater variety of animals.

Adaptive Radiation of Limbs in Mammals:

It is well known that mammals origina­ted from their terrestrial reptilian ancestors. Till their origin they were moving to different possible habitats, like water, tree, sky, etc. Therefore, the limbs of mammals were vari­ously adapted for exploiting different envi­ronments (Fig. 4.32). 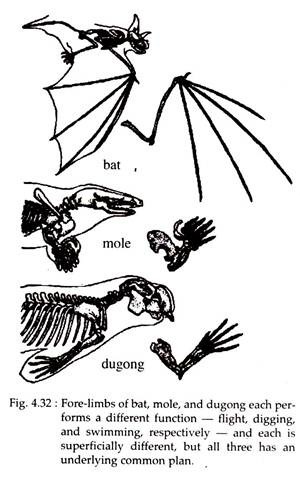 All aquatic mammals are secondarily aquatic. In aquatic Pinnipedia and platypus webbed feet are developed. Limbs are modi­fied into paddles in some mammals. In the paddle, the entire limb skeleton is enclosed by skin.

Various bone joints of the limbs lose mobility and entire structure acts as a single unit. In whales, fore-limbs are modified into fish-fin like structure, called flippers. Hind limbs of opossum, hippo are swimming organ, while that of platypus act as balancers. In whales, dolphins and sirenians hind limbs are absent.

Maximum adaptive changes are present in cursorial mammals, both externally and internally.

These can be described as follows:

Primitive ter­restrial foot posture is plantigrade, which in some forms gave rise to unguligrades through the digitigrades. Hence lengthening of limbs occurs by rising upon toes (Fig. 4.18).

(Latin: planta, sole; gradi, to walk) In this posture the entire palm or sole rests on the ground, e.g. bear, Raccoon, and primates (Baboons and Man).

(Latin: digitus, finger) In this posture the animals walk or run by placing only the digits on the ground with the carpals and tarsals. The metacarpals and metatarsals remain above the ground, e.g., dog, fox, hyena etc.

With the loss of digits there occurs a compacting of bones of the palm and the sole, and often it is fused to form the metapodials. Often this is carried to give rise to actual fusion of these elements into a canon bone. Birds show a fusion of metatarsals while speed adapted ungulates show fusion of bones.

Reduction of Fibula and Ulna:

The entire motion of the limbs becomes restricted to move in one plane, except gir­dles. In the girdles universal movements through ball and socket articulation persist. There are two reasons for this type of adapta­tion — one is to avoid interference between fore and hind limbs, while running.

Another need arise on lying down and rising again as the girdles restricted to fore and aft plane. With other articulations, those have the ankle and wrist; knee and elbow and between the digits the tendency happens towards rigid limitation of movement in unguligrade but less in digitigrade forms.

Lengthening of limbs is evident for long strides. Increase of length may be both actual and relative. Concentrated muscles of the proximal part of the limbs transmit co­ordinated powers to the lower legs through the attached tendons.

Only the limbs cannot increase, such increase is always co-ordinated along with others, like the increase of neck, skull and other portions of body parts, perhaps corre­lated with the food getting and drinking. Hence, a definite ratio of body parts must be co-ordinated.

A two-footed mode of pro­gression as an adaptation to speed is called bipedality and it is evident in many mam­mals. Structural modification for bipedality is evident from reduction of fore limbs.

In bipedal creatures due to divisions of labour, the hind limb becomes exclusively a rapid propulsive organ, while the fore limbs retain their generalized characters, as their sole use for resting as in kangaroos, which is also used for other purposes. While the cursorial adaptation is perfected, the fore-limbs become smaller and much reduced.

Long limbs create problem in short passage, so the limbs become shor­ter. It becomes shorter and stouter in attain­ing speed in semi-fossorial animals, e.g., hare, pig-footed bandicoot, etc. The palm becomes broadened by an additional bone and with the original five fingers, it is known as os falciformi. The middle finger becomes greatly enlarged and bears claws in Chrisocloris sp.

It can be held by any of the two processes:

(a) Either by shifting the whole pectoral girdle towards the neck, e.g., mole; or

(b) By hollowing of the thoracic cavity.

The ribs and sternum become inward­ly convex instead of outwardly, e.g., monotremes. Clavicle extends from the pectoral socket to the episternum. A T-shaped epister­num is present in monotremes. Coracoid is present as a process from scapula.

Ileum and ischium deve­lops parallel to the vertebral column. Ischium becomes fused to the sacrum.

Functions of the limbs:

Parallel Features of the Fore and Hind Limbs:

From the functional aspects, the hands and feet have undergone divergent specia­lizations rendering that the hand loosens the earth while the foot throws it backward and drive the creature ahead and resist the back­ward thrust. Hand is more powerful than foot in digging while foot is more effective than hand in speed.

Pectoral girdle is strong enough and includes well- developed clavicles and scapula. In pelvic girdle the ileum is broadened out as a support for the viscera, e.g., sloth.

Climbing forms are generally plantigrade. The fore limbs may be very long as in sloth and gibbons.

Syndactyly condition is evident in some, like sloth and marsupials. The foot of the koala (a marsupial) is with syndactylous second and third toes, which functions as four toed exhibiting digital reduction. In lemur fourth digit is the largest.