In this article we will discuss about the asexual and sexual modes of reproduction in animals with the help of suitable diagram.

Asexual reproduction is that kind of reproduction which has the involvement of only one parent. In this there is neither gamete formation nor fusion of gametes. When the organism reproduces asexually, the offspring formed is genetically identical to the parent and is its clone.

There are three types of asexual reproduction in animals:

In this kind of asexual reproduction buds arise in or on the body surface. These buds can be unicellular or multicellular and arise by the process of mitosis. These buds enlarge and after attainting a particular size get detached from the parent body to lead an independent life (Fig. 19, 20). 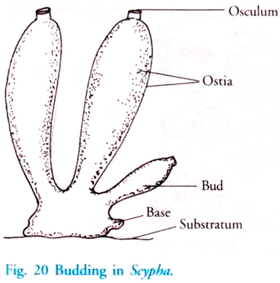 During its life span it grows, feeds, reaches the adult size and reproduces. Animal showing the kind of reproductions are sponges (Scypha), coelentrates (Hydra), annelids (Syllis) and tunicates (Salpa).

Budding can be of two types:

i. Exogenous or External Budding:

This type of budding is seen in Hydra, Scypha, Obelia, etc. In Hydra, a bud is formed on the body surface. The coelomic cavity of the parent body continues in this also. The free end develops a few tentacles. The buds grow and after sometime a constriction is formed at the fixed end.

The bud detaches from this side and grows into an adult to lead an independent life. In case of Obelia and Scypha the bud does not detach from the parent body but forms a colony. In Obelia the individual of a colony are called zooids and perform different functions.

This kind of budding is found in Spongilla and a number of marine sponges. In this case gemmules (internal buds) are formed inside the parent body. Each gemmule has outer covering of spicules which help in dispersal and perennation. Inside this covering is present a mass of undifferentiated cells called as archaeocytes. During favourable conditions these gemmules germinate to form new sponges.

In this type of reproduction an adult individual, once grown fully will divide into two or more daughter cells.

Depending on the number of daughter cells formed it is of two types:

i. Binary Fission and

Binary fission is the simplest method of asexual reproduction and is found in protists, bacteria, green algae and Planaria. In this the adult grows and divides into almost two equal daughter cells (Fig. 22). 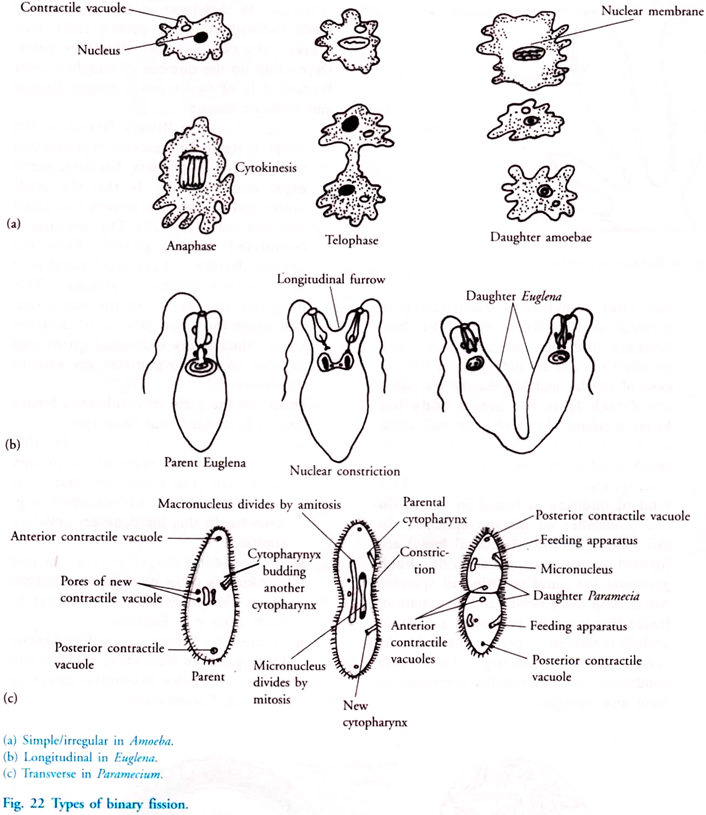 This division is completed in two phases. First the nucleus divides karyokinesis and next the cytoplasm divides – cytokinesis. This daughter cell grows to the adult size and again the same process of division starts. Since every individual grows and divides so such organisms are said to be immortal.

Based on the plain of cytokinesis binary fission is divided into three types:

In this cytokinesis can take place in any plain with the condition that it is perpendicular to karyokinesis e.g. Amoeba. In this the daughter cells are similar.

In this cytokinesis takes place in longitudinal plain. Daughter cells are similar to each other e.g. Euglena.

Part of cytoplasm, which is not used in this process, is called residual cytoplasm. This mass of divided nuclei and cytoplasm remains surrounded by parent body till it ruptures to release all the daughter cells in the surrounding (Fig. 23). 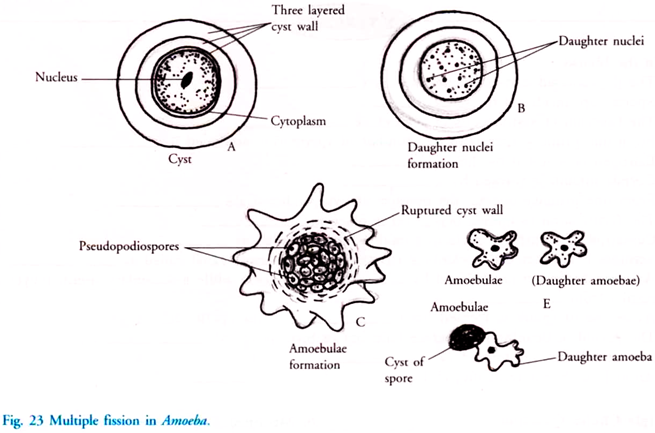 In Amoeba this process takes place under unfavourable conditions. Before the multiple fission, pseudopodia are withdrawn and Amoeba acquires a spherical shape. This is followed by encystment, i.e. formation of protective layer called cyst. After encystment, multiple fission starts giving rise to daughter cells.

These daughter cells are called as pseudopodiospores and the mechanism of their formation is called sporulation. These cysts are carried away by air to more favourable places where these daughter cells germinate to form adult Amoeba.

This kind of reproduction is found in flatworms e.g. Microstomum. In this the organism divides into two or more pieces and each piece has the capacity to generate the most of the body parts (Fig. 24). This is known as regeneration. This is also found in Coelenterates and large number of Sponges. Hydra also shows fragmentation.

In sexual reproduction there is involvement of two parents that generate gametes. Fusion of gametes takes place to give rise to offspring.

There are two types of sexual reproduction in animals:

In amphigony two gametes fuse to form a zygote. These gametes may be from same parent or different parents.

Amphigony is of two types:

This involves the fusion of two haploid cells to form a diploid zygote. This fusion is complete and permanent. This is the most common mode of sexual reproduction. It may be endogamy (self-fertilisation) or exogamy (cross-fertilisation).

On the basis of structure, gametes can be of following three types:

When both sperm and ova are morphologically similar e.g. Monocystis (protozoa).

When both the gametes are morphologically and physiologically dissimilar.

When the organism itself acts as gamete e.g. Yeast.

There are some special types of syngamy:

In this case the gonads develop in larval stages and make the larva sexually mature. This is found in Axolotl larva of Ambystoma (salamander).

In certain animals like Armadillo and also human beings the blastomere of zygote completely separates from each other by deep cleavages and each gives rise to a complete individual.

In conjugation there is temporary pairing of two individuals. The gametes here are called male pronucleus and female pronucleus. After the zygote formation, conjugates separate and zygote divides by binary fission e.g. Paramecium.

Parthenogenesis is a monoparental reproductive process. In this an unfertilised ovum develops into a fully formed haploid organism. This kind of reproduction is found in invertebrates as well as vertebrates such as – rotifers, wasps, honeybees, aphids, domestic turkey, Typhlina brahmina (snake), Lacertina saxicola armeniaca (lizard).

The fertilised egg develops into either the queen (when fertile female is fed with royal jelly) or into workers (sterile female). Other organisms showing natural parthenogenesis are aphids, rotifers and phyllopods.

Other than artificial and natural parthenoge­nesis, parthenogenesis may be:

In this kind of parthenogenesis only females are present. Males do not exist. Complete parthenogenesis occurs in rotifers. In Lacerta saxicola armeniaca (Cucasian rock lizard) and Typhlina brahmina there are no males and females reproduce parthenogenetically.

In certain cases the larva is capable of pro­ducing a generation of larvae partheno-genetically. It is called as paedogenesis e.g. Gall fly (insect).

i. Both sexes are not required for the generation of offspring.

ii. This is a faster and easier replica of parent.

iv. Conditions like triploid and aneuploid can be created.

i. There is no combination of gametes and hence variation does not occur.

ii. Parthenogenesis does not favour evolution. 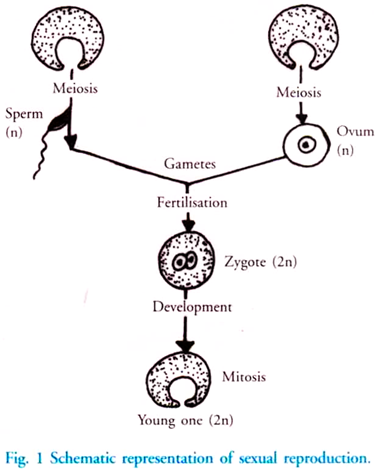