In this article we will discuss about the asexual and sexual modes of reproduction in protozoa, explained with the help of suitable diagrams.

The mode of reproduction in which there is no union of gametes. In such a case, only one animal can produce new individuals. Protozoa usually reproduces asexually by binary fission and multiple fission.

The animal divides and two individuals are produced from one:

1. The micronucleus divides into two by a simplified form of mitosis.

2. The macronucleus divides into two by amitosis.

3. The cytoplasm divides into two equal halves by a constriction.

4. The daughter individuals can recon­struct the wanting structures which it does not obtain from the parent. Asymmetrical structures like gullet, peristome of Paramoecim cannot be equally shared by both the daugh­ter individuals.

b. Longitudinal fission. The animal splits into two along the long axis of the body. Examples: Euglena, Vorticella, etc.

Many individuals are produced from one at a time. Examples: Some Amoebae, Euglena, Polystomella, etc.

1. The animal becomes encysted, the nucleus divides repeatedly and a large num­ber of minute daughter nuclei are produced.

2. The cytoplasm fragments and a small bit of it surrounds each daughter nucleus and, thus, many minute animals are formed.

3. Under favourable circumstances the cyst bursts and these small animals come out and grow to the adult stage.

Multiple fission is common in sarcomastigophorans and apicomplexans. The process has been differently named according to the period and time of occurrence.

Following types of multiple fission are found in proto­zoa:

The resulting individuals are known as agametes or merozoites. Example: Plasmodium.

It occurs following sexual fusion. The products are surrounded by a cyst or a resistant covering and termed as spores. Motile spores are known as swarmer’s or swarmospores.

The swarmers are of two types:

New individuals are produced by separa­tion of a portion of the cytoplasm of the parent organism with a daughter nucleus. It may be simple or multiple, exogenous or endogenous. Budding is common in suctorians. Examples: Noctiluca, Tokophrya, etc.

The modes of reproduction in which two gametes unite to form a new individual is known as sexual reproduction. The two units (male and female gametes) from two separate individuals unite by fusion of their cytoplasm, followed by the union of their nuclei. Most protists (protozoa) can continue to live, mul­tiplying asexually for prolonged periods and may undergo sexual reproduction only at irregular intervals.

However, there are many protozoans in which sexual reproduction is of regular occurrence. Sexual reproduction involves meiotic division reducing the chro­mosomes to haploid number. In majority, reduction division occurs shortly before syngamy. This is called gametic meiosis, in which gametes become haploid.

But in some proto­zoans reduction division occurs in one of the subsequent divisions after formation of zy­gote. This is termed as zygotic meiosis, in which only zygote is diploid but rest of the life cycle is haploid. Of different types of sexual reproduction in protozoans syngamy, conjugation, automyxis are important.

I. Syngamy or Sexual Fusion:

Syngamy is the complete and permanent union or fusion of two specialised protozoan individuals or gametes resulting in the for­mation of a fertilized cell or zygote or oospore. The nuclei of the gametes fuse to form the zygote nucleus or synkaryon. The zygotes develop into adult, either directly or through encystment and fission of various types.

Depending upon the degree of differen­tiation of the fusing gametes syngamy may be of the following types: 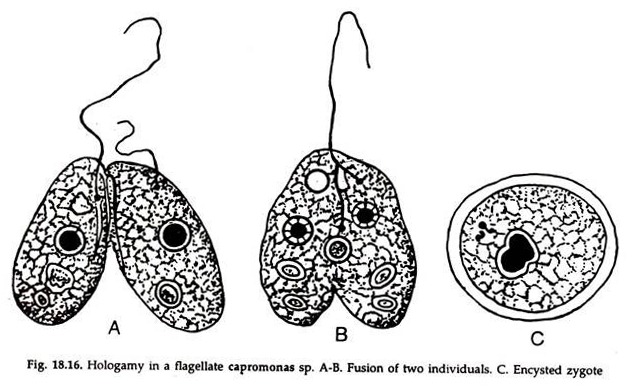 The uniting individuals are smaller than the ordinary vegetative indi­viduals, called merogametes.

The two fusing gametes differ in size, shape and behaviour. The ga­metes are termed as heterogametes or anisogametes and their fusion is known as anisogamy or heterogamy. The formation of morphologically different gametes, is the first indication of sex differentiation in Protozoa.

The smaller gametes, the microgametes, or male gametes, are active, motile, generally flagellated and more numerous. They are produced by multiple or repeated fissions.

The syngamy brings about a combination of two different lines of hereditary characters. It increases the external differences in offspring’s. It also renews the vigour which is lost due to repeated binary fissions. The fu­sion of two nuclei initiates the development of eggs.

The conjugation is the temporary union of two mating types of individuals of the same species to facilitate exchange of nuclear ma­terials. They retain their distinct individual­ity and separate out after nuclear exchange. The pairing gametes are known as conjugants. The conjugants may be either isogamous (Paramecium) or anisogamous (Vorti­cella).

Conjugation is considered to be an epi­sode in reproduction and not a mode of multiplication. In conjugation (i) reorganiza­tion of a fresh meganucleus occurs to accel­erate the metabolic activities, (ii) rejuvenation and revival of lost vigour, (iii) new nuclear combinations and new hereditary combina­tions arise.

Automixis is the fusion of two gametic nuclei originating by the division of the single nucleus of an individual.

Automixis may be of the following types:

The fusing nuclei come from the same cell as in Paramecium. All the steps in nuclear changes are similar to conjugation but the union occurs between the pronuclei of the same individual.

The fusion occurs between two nuclei coming from two different cells of a parent. A single organism encysts and then divides into two or more gametocytes. The nuclei of these gametocytes undergo meiosis and the gametes thus produced unite in pairs forming the zygotes. Examples: Actinosphaerium, Actinophrys, myxosporidians, etc.

In a number of species of Paramoecium the two individuals fuse with their oral surfaces. The nuclear changes occur as in conjugation but no nuclear exchange occurs. The two gametic nuclei in each indi­vidual fuse to form synkaryon. Cytogamy is said to be intermediate between conjugation and autogamy.

Other modes of reproduction:

Two or more individuals may fuse by their cytoplasm to form a plasmodium and separate out unchanged with their distinct nuclei. This sexual phenomenon is known as Plasmogamy and occurs in certain Rhizopoda and Mycetozoa.

The regeneration and replacement of lost parts among free-living and few parasitic protists is widespread. A proper proportion of cytoplasm and nucleus can regenerate into an entire individual.