In this article we will discuss about:- 1. Genus of Euglena 2. Structure of Euglena 3. Locomotion 4. Nutrition 5. Reproduction. 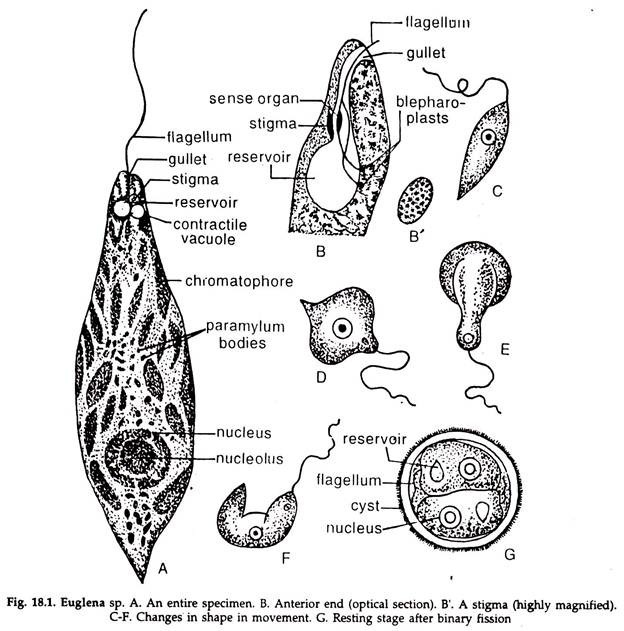 1. The body is soft and stout, the anterior end being blunt and the posterior end pyriform.

2. It is covered by a pellicle, which per­mits characteristic euglenoid movement (metaboly).

3. At the anterior end, a depression, known as gullet, is present. A whip-like long flagellum arises by two roots from the blepharoplast in the gullet.

4. The cytoplasm is divisible into an outer, clear, flexible ectoplasm and an inner, semi­fluid, granular endoplasm.

Following structures are found embedded in the endoplasm:

a. The nucleus is rounded, surrounded by a membrane and is placed near the centre of the body, with a small nucleolus.

b. One or more contractile vacuoles— acting as water regulator’s—are present at the anterior end of the body.

c. A large non-contractile space—the res­ervoir—is situated close to the contractile vacuole and is connected with the gullet.

d. A red speck—the stigma or eye spot, a derivative of chlorophyll and sensitive to light—is placed close to the reservoir. The stigma is in close contact with a well-marked thickening of one of the two branches of the flagellum, which is suggested to be a specialised sensitive organ (Wager, 1900).

e. A green pigment, chlorophyll, which is characteristic of plants, is present, giving a green colour to Euglena and the organism can manufacture carbohydrate food materials— like plants by photosynthesis.

f. A single group of chloroplasts radiates from the centre. In the centre of each chloroplast is a pyrenoid, which may be enclosed in a paramylum sheath.

Euglena moves forward through the water by the lashing movement of the flagel­lum. It also exhibits a slow worm-like move­ment by alternate contraction and expansion of the body known as euglenoid movement or metaboly.

Holophytic (plant-like), holozoic (animal- like), and saprophytic nutrition is found in Euglena. Euglena obtains its carbohydrate food by photosynthesis and nitrogenous food by absorption from the surroundings. Its holozoic nutrition is, however, doubtful.

Euglena reproduces by binary and mul­tiple fission. No sexual process is known.

a. Under unfavorable conditions Euglena secretes a protective wall around it and becomes encysted.

b. In the encysted stage, the organism splits longitudinally and two daughter indi­viduals are formed.

c. The split starts from the anterior end and runs backward. In the meantime, the nucleus elongates and divides into two.

d. Finally, the individual is divided into two, each half receiving one daughter nucleus.

N.B.: Longitudinal fission in Euglena has also been recorded in the active free-living stage.

a. In the encysted stage the nucleus divides repeatedly and a large number of minute daughter nuclei are produced.

b. The cytoplasm breaks up and a small amount surrounds each daughter nucleus and many minute animals known as flagellate are formed.

c. Under favourable circumstances the flagellate come out of the cyst, and passing a short period through amoeboid stage de­velop into adult Euglena.