In this article we will discuss about the structure and reproduction of vorticella, explained with the help of a suitable diagram.

1. The body is a solid inverted bell from the base of which runs a narrow stalk made of contractile elements by which the animal is permanently attached to some submerged substratum (Fig. 18.13). 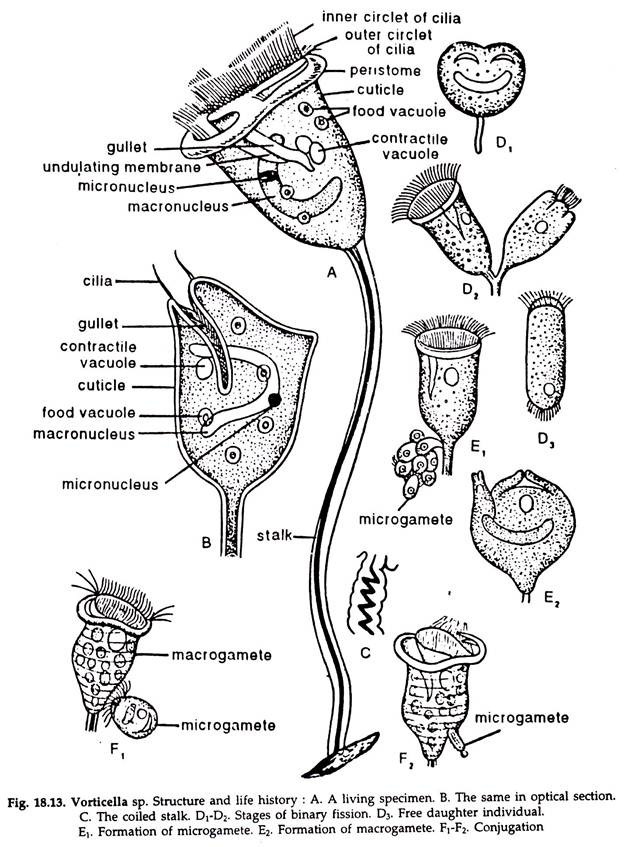 2. The margin of the bell is thickened to a rim-like structure, the peristome.

3. A disc-like structure is present on the peristome at the top of the bell.

5. The cilia are large and arranged in rings around the peristome and the disc. The cilia fuse to form an undulating membrane in the vestibule.

6. Reservoir, food vacuoles and a con­tractile vacuole are present.

Vorticella reproduces both by asexual and sexual means. Asexual reproduction is ef­fected by fission and this is the normal mode of reproduction in Vorticella.

2. Both the micro- and macronuclei be­come elongated and a constriction appears in the middle of each nucleus.

3. A constriction appears at the middle of the disc and a mouth, vestibule and gullet appear on that half which lacks these struc­tures.

5. One of the two daughter individuals gets detached from the stalk, develops a second circlet of cilia at the basal end, assumes the shape of a barrel and becomes free swimming.

6. After a brief period of free life the second circlet of cilia is lost, and developing a stalk from that end, the animal becomes permanently attached to some substratum.

Vorticella is a sedentary animal. By devel­oping a free living stage at the time of repro­duction, the non-locomotory species becomes locomotory and, by its dispersal, overcrowd­ing of individuals in a limited area is avoided.

It takes place by conjugation. After a number of generations produced by binary fission the individuals appear weakened and unhealthy and conjugation takes place at this stage. The conjugation is permanent in Vor­ticella and it resembles fertilization to some extent. The different types of gametes pro­duced during conjugation are known as macrogamete and microgamete.

1. The micronucleus of some of the weak­ened, ordinary stalked individuals, under­goes one meiotic division and two daughter nuclei with half the original number of chro­mosomes are produced in each individual.

2. One of the two nuclei disappears and the individual is now known as macroga­mete.

1. Vegetative structures of some of the weakened individuals disappear and the micronucleus divides thrice, of which one is meiotic and 8 daughter nuclei with half the original number of chromosomes are formed.

2. The cytoplasm fragments, a small bit surrounds each daughter nucleus and 8 microgametes are produced.

3. The microgamete is oval with one end pointed. At the pointed end, a circlet of cilia develops and the gametes come out leaving the mother animal empty.

The essence of conjugation is the recep­tion of nuclear material from another indi­vidual: its effect appears to be a renewal of vitality which is essential for rapid reproduc­tion by binary fission.