In this article we will discuss about the structure and life history of monocystis.

The adult organism or the Trophozoite has the following features:

1. Body spindle-shaped and flat and cov­ered by a thin layer of cuticle. The anterior end is broader and the posterior end is nar­rower.

2. The cytoplasm is divisible into a thin outer layer, the ectoplasm and an inner granu­lar mass, the endoplasm.

3. Small thread-like structures, compa­rable to the muscle fibres of higher animals, known as myonemes are present in the in­nermost layer of cortex.

4. A single large nucleus with a distinct nucleolus and nuclear membrane is present towards the anterior end.

5. It performs slow movements by the contraction and relaxation of the body.

1. Two trophozoites approach each other and come in close contact. Each individual becomes rounded off and the two secrete a double-walled cyst around them. The cyst is known as gametocyte and the individuals gametocytes.

2. The nucleus of each gametocyte un­dergoes repeated divisions, one of which is pragametic meiosis and many daughter nu­clei are produced.

3. The nuclei arrange themselves along the periphery of the gametocyte, the cyto­plasm breaks and a small bit surrounds each nucleus and thus many gametes are formed.

4. The gametes begin to move and the partition wall between the two gametocytes break down and the gametes are set free in the gametocyte.

5. Gametes produced from the two ga­metocytes unite in pairs and zygotes are formed.

6. Each zygote secretes a boat-shaped chitinoid case around itself. The zygote is now known as spore and the case as sporo­cyst—the whole structure is commonly known as pseudonavicella (Fig. 18.8F). 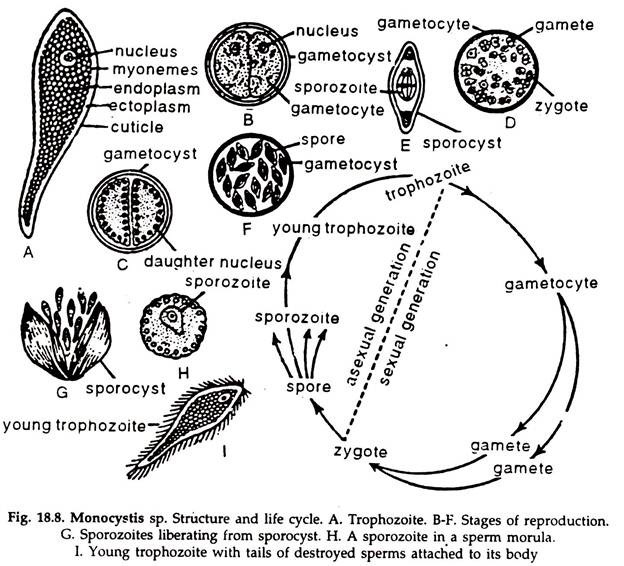 7. The nucleus of the spore undergoes three successive fissions and 8 nuclei are pro­duced. The cytoplasm aggregate around the nuclei and 8 sickle-shaped sporozoites are formed, which remain packed as a bundle within the sporocyst. Further development does not take place if the sporocysts with the sporozoites are not transferred to a new Pheretima.

The mode of transference of parasites from host to host is known as transmission.

Sporocysts may be transferred by any of the following means:

1. The infested earthworm may die and, after the decomposition of the body, sporocysts get mixed with the soil and may reach the intestine of another Pheretima when it ‘eats’ soil.

2. The infested Pheretima may be eaten by bird. The body is digested in the intestine of the bird and the undigested sporocysts com­ing out with the faecal matter get mixed with the soil, which may be eaten up by another Pheretima.

3. During mating, certain amount of semi­nal fluid of earthworms falls on earth. Sporocysts—which remain floating in the semi­nal fluid—come out with it and get mixed with the soil and may be eaten up by another worm.

Changes in the New Host:

1. On reaching the intestine of the Pheretima, the sporocyst dissolves by the specific action of the enzymes and the sporozoites are liberated.

2. The sporozoites bore through the gut wall, reach the coelom and swim to the cili­ated funnels of the male reproductive system to live temporarily as intracellular parasites.

3. The sporozoites leave the funnels and attack the cells of the sperm morulae and grow as intracellular parasites.

4. Young trophozoites leave the sperm morulae, come to the vesicula seminalis where they grow and become adult by ab­sorbing seminal fluid.

Effect of Parasitism on Host and Parasite:

Parasitism is a hetero-species association (between two different species) in which one (the parasite) remains not only in continuous, intimate association with another organism (the host), but is also metabolically depen­dent directly or indirectly on it; the parasite is dependent on host for developmental stimuli, digestive enzymes and also for con­trol of maturation.

Monocystis destroys large num­ber of sperm cells. But still the spermatozoa produced are much more than the demand and it cannot inflict any material harm on the host.

Due to easy available ready food, all the vegetative organelles—like or­ganelles of locomotion, digestion, etc.—are degenerated to a great extent. On the other hand, the chances of destruction during transmission from host to host are always great but this has been compensated by the production of numerous spores, so that at least a few may reach the host and the race is successfully continued.