In this article we will discuss about the structure and reproduction in paramoecium, explained with the help of suitable diagrams.

1. The body is like a crude slipper (Fig. 18.10), the anterior end blunt and the poste­rior end narrower.

2. The surface is covered with a tough and flexible pellicle and cilia arising from basal granules are arranged in longitudinal spired rows.

3. A large depression known as peris­tome is present on the ventral surface. The peristome narrows down to form the gullet which ends in the soft endoplasmic mass.

4. The cytoplasm is divisible into an outer firmer cortex and an inner granular medulla.

5. The nuclei are two in number, one is larger and called the macronucleus and the other is smaller, the micronucleus.

6. The micronucleus lies close to the macronucleus.

7. Contractile vacuoles are two and placed at the opposite poles. To each of them are connected a number of radiating feeder ca­nals. In some species of Paramoecium (P. putrinum and P. trichium) the radiating canals are absent.

8. Food vacuoles are many and move along a definite path.

9. Under certain conditions, the cortex is seen to project into minute radially arranged threads called trichocysts. 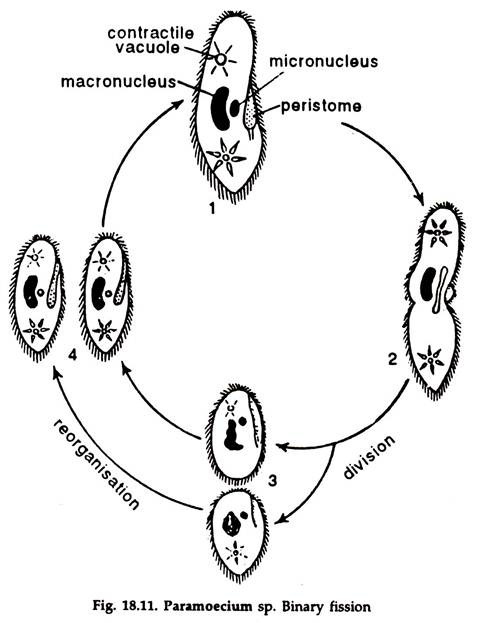 1. It takes place by transverse binary fis­sion. One fission takes about 2 hours and the next fission starts after 24 hours of the first fission.

2. Both the micro- and macronuclei elon­gate and constrictions appear in the middle.

3. A small, new gullet is formed from the posterior end of the old gullet and it moves backward.

4. A constriction appears at the middle of the cytoplasmic mass.

5. A new contractile vacuole appears on each side of the constriction.

6. The constrictions of both the cytoplasm and nuclei grow deeper. The micronucleus divides into two by mitosis, and the macro- nucleus by vegetative division.

7. Finally, the cytoplasm is divided into two equal halves and each half receives one micro- and one macronucleus, two contrac­tile vaculoes and one gullet.

8. The undulating membrane appears in the newly formed gullet and two identical daughter individuals are formed.

It is a temporary union between two in­dividuals in which the uniting gametes are similar, i.e. they cannot be differentiated into male and female gametes (Fig. 18.12). 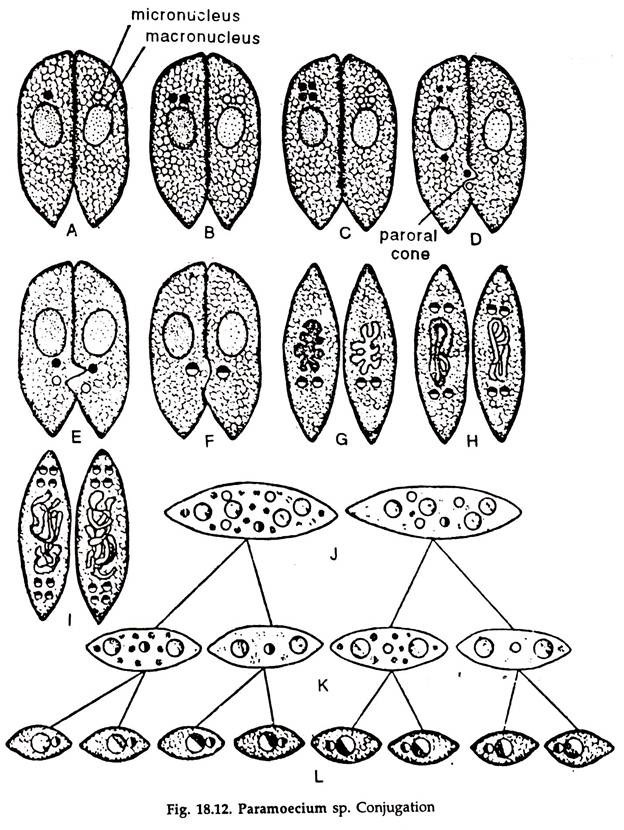 Conjugation is a peculiar type of sexual behaviour which is limited to the phylum Ciliophora. In this process, two individuals come and attach themselves along their oral sides, and exchange their gamete nuclei, after which they separate and a new nuclear appa­ratus arises from the products of the fusion- nucleus, or synkaryon in each ex-conjugant, while the old macronucleus degenerates.

Following are the main events in the process of conjugation:

1. Two individuals known as conjugants, approach each other and become applied along their oral sides.

2. The macronucleus remains unchanged but the micronucleus of each conjugant un­dergoes two divisions, one of which is meiotic, producing four haploid nuclei.

3. Three out of four disappear and the fourth one divides to produce two pronuclei.

The pronuclei usually take a position near the oral region, where a cone-shaped protrusion, the paroral cone extends from each towards the other.

4. One of the pronuclei is known as the active pro-nucleus and the other as the pas­sive or stationary pro-nucleus.

6. The conjugants begin to separate, the macronucleus is gradually transformed into a skein, which breaks up and is ultimately lost. Each zygote nucleus divides thrice to form 8 nuclei. Four of these begin to grow and are known as macro-nuclear anlagen, since each of them will develop into a macronucleus.

7. As growth of the anlagen proceeds, three of the other four nuclei grow slightly, then begin to degenerate and ultimately dis­appear, while the eighth nucleus becomes the functional micronucleus.

8. At this stage binary fission starts. In fission, only the micronucleus divides and the macro-nuclear anlagen are simply distrib­uted in the four descendants. Each daughter individual gets one macro- and one micro- nucleus. Enuring these changes the fragments of the old macronucleus are gradually ab­sorbed, while the anlagen attain their full size.

The essence of conjugation is the exchange of nuclear materials between two individu­als; its effect appears to be renewal of vitality and rejuvenation.

Temperature, food, light, bacterial popu­lation and culture medium—each is supposed to have effect on conjugation. Investigations by Sonneborn (1938) and Jennings (1939) have shown the existence of different ‘mating types’ in Paramoecium. The types within each group will conjugate but not with the types of an­other group. Definite period of the day and temperature are specific for a particular group.

It is a type of nuclear exchange which strongly resembles conjugation but without a nuclear fusion. The macronucleus disappears, the micronucleus divides into a number of daughter nuclei, most of which are lost, the remaining ones reconstitute new micro- and macronuclei until the normal condition is attained.

The genetic significance of such a process is uncertain. Conjugation retards the rate of endomixis. It seems to be a substitute for conjugation since it occurs in the absence of the latter. The main purpose is to replace periodically the old, worn out macronucleus which results in the rejuvenation of the cell.

This process occurs in single individuals and almost parallels endomixis. As the term signifies, the gametes produced from the same individual fuse and nuclear reorganization takes place from this nucleus. The process is common in Paramoecium Aurelia. Autogamy brings about rejuvenation of the race. The old worn out macronucleus is replaced by the new active nucleus.

In this process the macronucleus divides into two but one of them is soon lost. In other cases the macronucleus instead of dividing may give out masses of its material into the cell which dissolve in the cyto­plasm. Here the re-organisation of the ma­cronucleus is brought about by old macro- nucleus. Hemixis has been reported in Paramoecium caudatum and Paramoecium Aurelia. The significance is uncertain.