A fatty acid consists of a hydrocarbon chain and terminal carboxylic acid group (Fig. 8.73). Most of the fatty acids found in biological system have an even number of carbon atoms arranged in an un-branched, i.e., straight chain form. Chain length usu­ally varies from 14 to 24 carbon atoms.

The fatty acids may be either saturated or unsaturated. A saturated fatty acid has all of the carbon atoms in its chain saturated with hydrogen atoms (Fig. 8.73A). This gives the general formula CH3(CH2)nCOOH, where n is an even number. 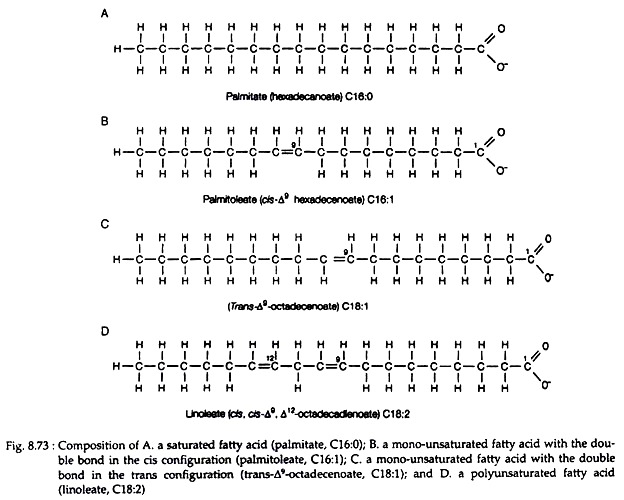 Notice that stearic acid, a saturated fatty acid, contains the same number of carbon atoms as the three unsaturated acids listed in the Table 8.12, yet it has a much higher melting point. 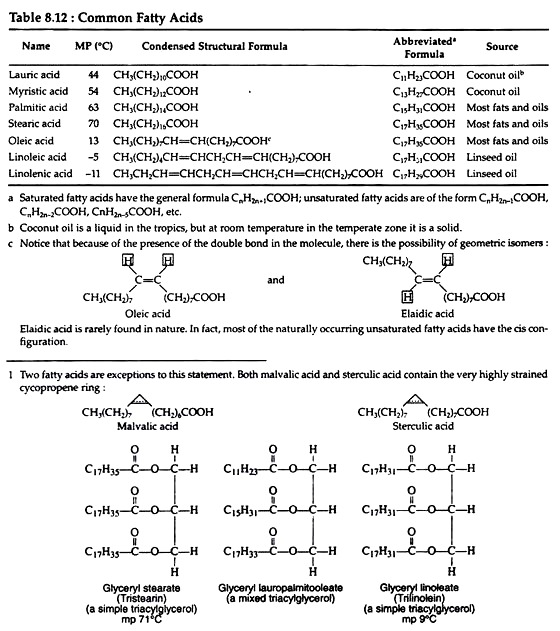 1. They are participating component of glycerophospholipids and sphingolipids. These are essential components of bio­logical membranes.

3. These are stored as triacylglycerols and act as stored fuel molecules. During nece­ssity they are broken down to generate energy.

These are named according to the total number of carbon atoms, and to the number and position of any double bonds. The systematic names for fatty acids are made by adding — ‘-oic acid’ on to the name of the parent hydro­carbon.

When two hydrogen atoms attached with the carbon atoms of the double bond are in the same side, they are called as cis (Fig. 8.73B & D). The most abundant fatty acids are given in Table 8.12. Fatty acids are usually called by their common names. They are derived from Greek or Latin words that indicate the source of the compound.

No single formula can be written to repre­sent the naturally occurring fats and oils since they are highly complex mixtures of mole­cules. Table 8.13 shows the fatty acid composi­tion of some common fats and oils. Notice that a fairly wide range of all values occurs. The range is wide because the composition of lipids is variable and depends upon the plant or animal species involved as well as upon dietetic and climatic factors.