Salt linkages (ionic bonds) result from interactions between pos­itively and negatively charged groups on the side chains of the basic and acidic amino acids. For the mutual attraction between an aspartic acid carboxylate ion and a lysine ammonium ion helps to maintain a particu­lar folded area of the protein:

Hydrogen bonds are formed principally between the side chains of the polar amino acids and between a carboxyl oxygen and a hydrogen donor group. Hydrogen bonds (as well as salt linkages) are extremely important in the interaction of protein with other mole­cules: 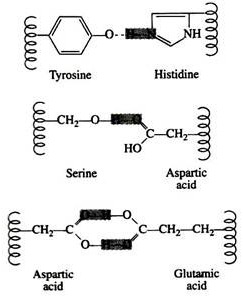 Two cysteine residues may come in proximity as the pro­tein molecule folds. The disulfide linkage results from the subsequent oxidation of the highly reactive sulfhydryl (—SH) groups to form cysteine:

This disulfide bridge is the second-most important covalent interaction involved in protein structure. Disulfide linkages are fre­quently found in proteins as a general aid to the stabilization of the tertiary structure. Note, that one or more of these bonds may join one portion of a polypeptide chain covalently to another, thus interfering with the helical structure.

Many investigators now believe that the non-covalent hydrophobic forces are the most signi­ficant in stabilising the conformation of a polypeptide chain. It is not because they are so strong, but rather because there are so many of them. The majority of the nonpolar amino acid groups, cluster together at the interior of the chain and the strength of all their hydrophobic interactions is conside­rable:

These are extremely weak forces and act only over extremely short distances; include both an attractive and a repulsive component. The attractive force involves interaction between induced dipoles formed by momentary fluc­tuations in the electron distribution in nearby atoms.

The regular folding of regions of the polypeptide chain is the feature of the secondary level structure of protein. These foldings are commonly of two types – α-helix and β-pleated sheet. In the rod-like α-helix, the amino acids arrange themselves in a regular helical conformation (Fig. 8.70a). The carbonyl oxygen of each peptide bond is hydrogen bonded to the hydrogen on the amino group of the fourth amino acid away (Fig. 8.70b). 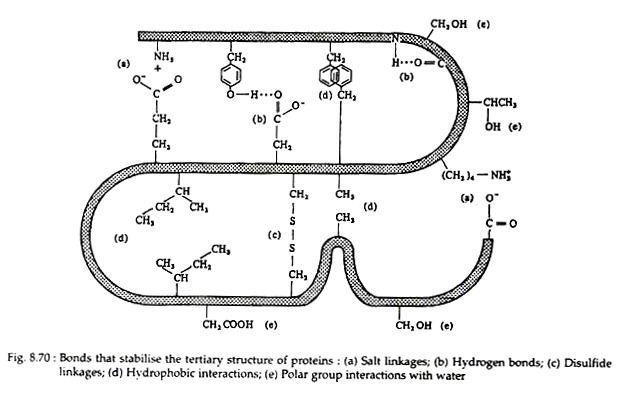 These hydrogen bonds running nearly parallel to the axis of the helix. In an α-helix there are 3.6 amino acids per turn of the helix covering a distance of 0.54 nm. The side chains of the amino acids are all positioned along the outside of the cylindrical helix (Fig. 8.70c). The distance between two consecutive α-carbons of amino acids is 0.15 nm.

The polypeptide chain within a β-pleated sheet is fully extended, and the dis­tance between two Cα of adjacent amino acids in 0.35 nm. β-pleated sheets are always slightly curved and, if several polypeptides are involved, the sheet can close up to form a β-barrel.

The polypeptide chain often reverses its direction, making a hairpin or β-turn, for compact and tight folding in a globular pro­tein. In β-turn the carbonyl oxygen of one amino acid is hydrogen bonded to the hydro­gen on the amino group of the fourth amino acid (Fig. 8.70d). Regions of the polypeptide chain that are not in a regular secondary structure are said to have a coil or loop con­formation. 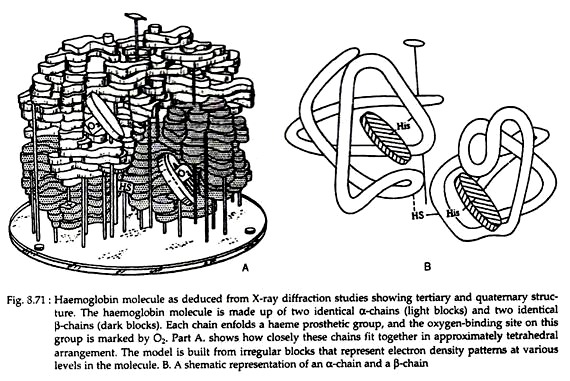 The linkages responsible for tertiary structure are formed between side chains of the amino acids. Table 8.11 gives an indication of the relative strengths of interactions involving the non-covalent bonds found in proteins. 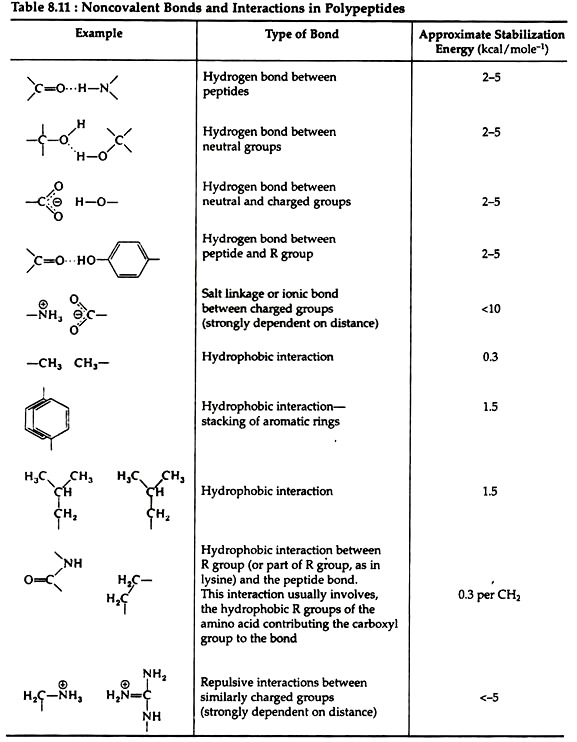