Proteins may be defined as high molar mass compounds consisting largely or entirely of chains of amino acids. The general formula of a naturally occurring amino acid may be repre­sented with the following Fischer projection formula (Fig. 8.60). In this structure an amino group is present on the carbon atom adjacent to carboxyl group.

The amino acids having this general formula are known as alpha (α) amino acids. In its structure four bonds of a carbon atom (Cα) are occupied by NH2, COOH, H and R molecules. R may be any compound which determine the properties of an amino acid and is referred to as the amino acid side chain:

Like carbohydrates and lipids, proteins could not be classified only on the basis of structural similarities. Because protein molecules posses great structural comple­xities.

In earlier days, a convention of classi­fying proteins was under two headings:

Nowadays, there are two alter­native methods of protein classification:

(1) According to the composition of the protein and

(2) According to the function of the protein.

These two classifications are given here:

1. Classification according to the compo­sition:

In this process, proteins are classified into two groups:

(a) Simple proteins, and

These are soluble in water and in dilute salt solutions. Albumins constitute the most important and the most common group of simple pro­teins. These are present in egg white (egg albumin) and in blood (serum albumin).

These are insoluble in water but are soluble in dilute salt solutions. They are widely distributed group of simple proteins. They are present as antibodies in blood serum and as blood fibrinogen.

They are soluble in water and insoluble in dilute ammonium hydroxide. Histones contain a high proportion of basic amino acids (lysine and/or arginine). These are found in association with nucleic acids in the nucleoprotein of the cell.

These are characterised by their insolubility in water and other solvents. Scleroproteins have structural and protective functions in the body. The examples of scleroproteins are keratin (present in hair, skin and nails), colla­gen (present in bone, tendon and car­tilage) and elastin (elastic fibers of connective tissues).

Different conjugated proteins are as follows:

These are composed of α-amino acids and phosphoric acids. So, their prosthetic group is phosphoric acid. Caesin, present in milk, is an important member of this group.

They contain a carbo­hydrate or a carbohydrate derivative as prosthetic group. Mucin, a constituent of saliva, is a glycoprotein.

Their prosphetic group is a pigment compound. Example: Haemoglobin. Its possesses the iron-containing pigment haemeco-ordinated to the simple protein globin.

Here prosthetic groups are complex polymers of high molar masses and are called nucleic acids (DNA and RNA). Nucleo-proteins are present in all the cells of plants and animals.

They consist of choles­terol esters and phospholipids attached to the protein molecules. They are frequently classified as compound lipids. Most of the lipid in mam­malian blood is transported in the form of lipoprotein complexes. The electron transport system in the mito­chondria contains large amount of lipoproteins. These are also found in egg yolk, myelin sheath of nerves and different cell organelles.

2. Classification on the basis of functions:

Proteins are classified into six groups on the basis of their functions:

These proteins participate in the formation of different body parts. More than half of the total protein of the mammalian body is collagen found in skin, cartilage and bone.

These special types of proteins are responsible for the con­traction and relaxation of muscle cells, e.g., actin and myosin. These proteins are also present in the unicellular animals.

They represent the largest class of proteins. Nearly 2,000 different kinds of enzymes are known. The enzymes are called biological catalyst and are vital for any activity in the living organism.

Higher organisms (birds, mammals, etc.) produce antibodies to destroy any foreign material (antigen) released into the body by an infectious agent. Gamma globulins are example of antibodies in mammals.

The albumins, globulins and fibrinogen are the three major protein constituents of blood.

In favourable conditions amino acids polymerize. The a-amino group of one molecule joins to the carboxyl group of another in a condensation reaction. This results in the formation of peptide linkage (Fig. 8.65). The peptides containing two, three and four amino acids are called dipeptides, tripeptides and tetra-peptides, respec­tively. The amino and carboxyl groups at opposite end of the depeptide can form peptide linkages with other amino acid molecules.

The term polypeptide is generally applied to the relatively small molecules of proteins containing from five to thirty-five amino acids. The term protein is arbitrarily used for longer polypeptides (i.e., having molecular mass above 5,000). However, this is not the fact that protein is composed of only one long polypeptide chain. 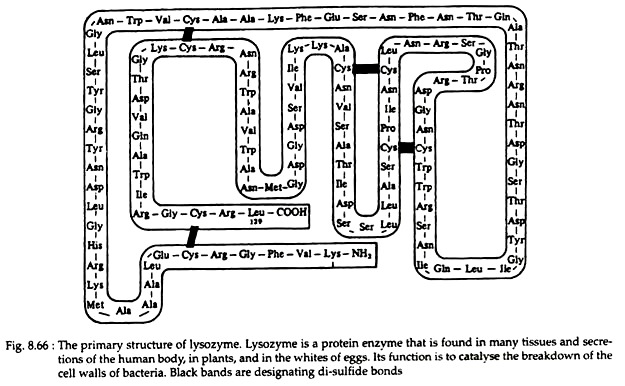 The primary structure of the protein is the number and sequence of amino acids in a polypep­tide chain. The only form of bonding in a protein’s primary structure is the peptide linkage. By convention, we represent the struc­ture of peptides beginning with the amino acid whose amino group is free and this end is called as N-terminal end (Fig. 8.69).

The other end, therefore, contains a free carboxyl group and is referred to as C-terminal end. Each amino acid in the peptide, with the exception of the C-terminal amino acid, is named as an acyl group in which the suffixine is replaced by-yl (e.g., alanine → alanyl, glycine → glycyl etc.). Oxytocin and vaso­pressin are peptides produced by pituitary gland. These are with primary structural con­figuration.

At present protein research yields a large number of sequences. This number is rapidly growing day by day. So instead of recording them on paper these are deposited in elec­tronic media. There are several protein sequence databases that can be accessed via internet.

Configuration and Conformation of Proteins:

Two considerations are involved in the secondary structure of proteins. The first one is configuration, which refers to the geo­metric relationship between a given set of atoms. Inter-conversion of configurational alternatives (e.g., conversion of D- to L-alanine) can be achieved only by breaking and reforming covalent bonds.

The second is con­formation, which refers to the three dimen­sioned architecture of the protein, the spatial relationships of all the atoms to all the others. The inter-conversion of conformers involves not the rupture of covalent bonds but the rupture and reformation of non-covalent forces (hydrogen bonds) that stabilise a given conformation.

The particular conformation of a protein is of immense importance in bio­logical activities. There may be different conformational species for a particular protein, but all cannot equally participate in biologi­cal actions.

Primary, secondary and tertiary struc­tures, described so far, deals with a single helix or one polypeptide chain. The quater­nary structure of a protein defines the struc­ture resulting from interactions between separate polypetide units of a protein con­taining more than one submit.

Example, the enzyme phosphorylase A contains two iden­tical submits that alone are catalytically inac­tive but when joined as a dimer it becomes an active enzyme (Fig. 8.72A). 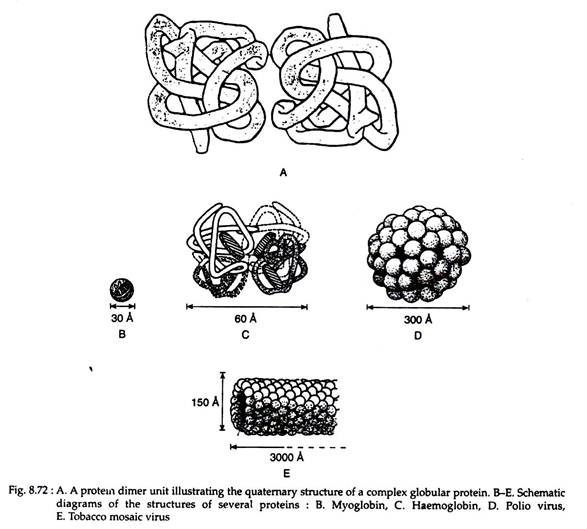 When this type of proteins is formed of identical subunits, the structure is called a homogenous quaternary structure; if the subunits are dissimilar, a heterogenous quaternary structure is obtained. Another term employed to describe the sub-units of such a protein is promoter, and a pro­tein made up of more than one promoter would be an oligomeric protein. In specific terms haemoglobin is an oligomeric protein having a heterogenous quarternary struc­ture, consisting of two identical α-chain promoters and two identical β-chain promoters (i.e. α2β2) (Fig. 8.72B-D).