Gene therapy is the curing of a genetic disorder by introducing into the individual a normal gene to replace or overcome the effects of a mutant gene. It involves genetic modification of the cells of a patient in order to combat a genetic disease by intracellular delivery of genetic material to generate a therapeutic effect.

The ultimate goal of gene therapy is the amelioration of disease upon a single administration of an appropriate ther­apeutic gene. Ideally, the new gene will exactly replace the damaged (mutant) gene and the disease will be cured for life with no side-effects.

In addition to replacement of the defective (mutant) or missing gene, gene therapy is also intended to augment the func­tions of the gene present, instill a specified sensitivity to a normally inert pro-drug, or to interfere with the life cycle of infectious dis­eases. The cell that has had a gene introduced into it by artificial method is called trans­genic cell, and the gene involved is called transgene.

Here germ line cells are modified to correct a genet­ic defect. Therefore, modification is made to a gamete, fertilized egg or embryo before the germ line has split off from the cells that will make the rest of the body. In germ line thera­py, genetic changes are passed onto subse­quent generations.

So germ line therapy results not only in the treatment for the genetic disease in an individual, but also his or her progeny. However, germ line therapy is currently considered to be ethically unac­ceptable, even though it has a potential to eradicate many hereditary disorders.

Here, somatic cells are modified genetically to pre­vent a genetic defect, so it involves insertion of correct genes into diploid cells of an indi­vidual, where the genetic material is not passed onto its progeny. Somatic cell gene therapy results in the treatment for a genetic disease only in the concerned individual, though his or her progeny could still inherit the mutant gene. It is being practiced in dif­ferent countries after obtaining permission from specific authorities.

The key issue in gene therapy is the efficient delivery of the transgene (the correct exogenous gene) to the target site and its stable regulated expres­sion. The most perfect form of gene therapy would be to completely replace the defective gene with a functioning transgene. This would allow therapy for all types of muta­tion including dominant ones.

Such gene replacement would involve homologous recombination between the transgene and the chromosomal copy. Germ line therapy requires gene replacement therapy, because this is the only way to be sure that the gene will be expressed in a normal fashion.

However, in somatic gene therapy, gene addition may be performed rather than gene replacement, where the transgene works alongside the mutated (defective) gene in the same cell. This is also called gene augmentation. It allows correction of the lack of gene function that occurs in recessive condi­tion. But such gene addition therapy cannot correct a dominant mutation where the mutant protein will still be produced and exhibit its effect.

Antisense mRNA can be used to inhibit such gene affected by a dominant mutation. In this case, antisense mRNA or an oligonucleotide, that is comple­mentary to the mRNA molecule originating from the mutant defective gene, can be introduced. The mRNA and the antisense mRNA will form a double stranded hybrid which cannot be translated and, so, will be degraded. However, such antisense mRNA strategies are still not ripe enough for practi­cal use.

The transgene and their regulatory sequences can be transferred – into human cells following some methods. These include the use of viruses (Table 9.11) as vectors, the chemically assisted transfer of genes across the cell membrane and the fusion of cells with artificial vesicles containing the cloned DNA sequences.

Use of First generation vector in Gene therapy:

The first retrovirus used as a clini­cal trial was constructed from the mouse virus called Moloney murine leukemia virus (Fig. 9.54). To prepare the recombinant virus, first a cluster of three genes is removed from the virus.

Then the cloned human gene of interest is inserted. The native virus contains a Ψ sequence required for encapsulation and genes that encode viral coat protein (gag). It also contains an RNA dependent DNA polymerase (Pol) and surface glycoproteins (env).

At each end, there is a long terminal repeat (LTR) which controls transcription and integration of the virus into the host genome. The constructed vector — called SAX vector retains the LTR Ψ sequence and also includes a bacterial neomycin resistance gene (neor) which acts as a selective marker (Fig. 9.54).

The gene of interest is fused to an SV40 early region pro­moter/enhancer in this SAX vector. Such SAX vector is typical retroviral vector that can be used in human gene therapy.

After packaging into viral protein coat, this recombinant vector can infect cells, but it is replication-deficient as it lacks the viral genes. After entering the cells, this viral genome carrying the cloned human gene moves to the nucleus and integrates into the chromosome. The wild-type gene, thus, become a part of the genome of the infected cells. Other first generation vectors used in gene therapy include adenoviruses (AV).

The first generation vectors like Moloney virus and adenovirus create several problems while using it as vectors in gene therapy.

i. Integration of retroviral genome with the cloned gene into the host cell genome occurs if the host cells replicate their DNA. In vivo conditions, a few target cells show DNA synthesis in minute amount.

ii. In hosts, most of these vectors elicit immune responses.

iii. The inserted viral genome can inacti­vate or mutate an indispensable gene in the host’s chromosome.

iv. Retroviruses have a low cloning capacity and these viruses cannot carry DNA sequences much longer than 8 kb (many human genes exceed this size without the introns).

v. If the retroviral genome is already present in the host cell, there is a chance of recombination between the vector and retro­viral genome, resulting in an infectious virus.

i. These viruses can be incorporated into non-replicating DNA of host cell.

ii. Do not elicit immune responses because of very small size.

In addition to adenoassociated viruses (AAV), Herpes simplex virus (HSV), and some non-viral systems like Lipoplexes and Naked DNA have also been trialed success­fully for gene therapy.

James Wilson from the Institute for Human Gene Therapy at the University of Pennsylvania (1999) first used such vectors, cloned with erythropotein gene. He intro­duced the vector in the bone marrow of rhesus monkey and muscle cells of mice where the gene triggered the production of the hor­mone that, in turn, caused increased produc­tion of red blood cells.

Additionally, these animals would produce the hormone when they were fed with the antibiotic repamycin. Thereafter, this therapy is being considered for patients having low blood counts, such as dialysis patients.

The first successful human somatic gene therapy treatment was done on 14th November 1990 in USA with a 4-year old girl, A. De silva. She was suffering from a rare recessive autosomal inherited disease, Severe Combined Immunodeficiency Syndrome (SCIDS), caused by a deficiency in adenosine deaminase (ADA) — an enzyme needed for normal function of the immune system. In patients, a mutation in the gene encoding the enzyme ADA results in severe immunodefi­ciency.

First, white blood cells were collected from the patient. T cells (involved in the immune system) were then isolated and mixed with a genetically modified retrovirus carrying a normal copy of ADA gene (Fig. 9.55). The virus infects the T cells, inserts a copy of ADA gene into the T cell’s genome. These genetically modified T cells were then grown in laboratory to ensure that the trans­ferred gene is expressed. 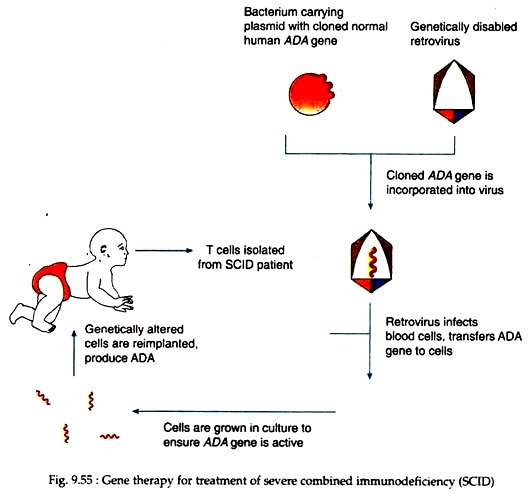 The patient was then treated by injecting a billion or so of the altered T cells into her blood-stream. Since T cells have a finite life in the body, continued infusions of engineered cells have done. As a result, the patients immune system started to function more normally. However, recently some patients, who have received gene therapy for ADA, developed leukemia for some unknown reasons.

In December, 1998, another successful somatic gene therapy was also achieved for sickle-cell anaemia. In this case, bone mar­row cells of 13 year old sickle-cell anaemic patient, Keone Penn, were replaced by stem cells from the umbilical cord of an unrelated infant. After 1 year, the patient was declared cured of the disease as there was no signs of sickle cells.

Gradually, many other genetic diseases, including thalassemias, phenylketonuria, Losch-Nyhan syndrome, cystic fibrosis, haemophilia A, haemophilia B, Duchenne Muscular Dystrophy (DMD), are expected to be treated with somatic cell gene therapy.

Gene therapy can also be used for non-heritable diseases, which are showing highly promising results in clinical trials. The follow­ing disorders are being considered for gene therapy and phase I trials are being carried out for cancers (skin cancer, breast cancer, brain cancer) and some infectious diseases like AIDS/HN. It can be applicable in DNA vac­cines.

One of the recent developments is the construction of human artificial chromo­some, based on a-satellite sequence as a cen­tromere. Such vector is capable of carrying a large DNA insert, making it possible to trans­fer the entire chromosomal gene locus instead of DNA only. It ensures safe and permanent maintenance of the transgene in the host body.

The future of gene therapy is promising and it is likely that, this technology will also be applied in our country in near future. However, many scientific, ethical and legal questions must be addressed before gene therapy is implemented on a routine basis.

The ethical guidelines for undertaking gene therapy in its present form are well-established. The experimental treatment will be initiated only after careful review at seve­ral levels and it should always protect the interests of the patient.

Therefore, in somatic gene therapy, only one individual is affected. So the therapy may be done with the permis­sion and consent of the patient. But in case of germ line therapy, the corrected DNA will be incorporated into all the cells of the individual produced from the genetically-altered genome, including his or her own germ cells.

So, here, individuals of future generations will be affected without their consent. Now the question is that whether the present gene­rations have the right to make the decision for future generations. Thus far, the concerns have outweighed the practical benefits, and such research or treatment is prohibited.

Another important debatable issue of gene therapy is the enhancement gene therapy whereby human potential might be enhanced for some desired traits, like intelli­gence, athletic ability, height, weight etc. At present, enhancement therapy-like germ line therapy – is an unacceptable use for gene therapy. However, the issues are still being debated and are unresolved.