In this article we will discuss about:- 1. Meaning and Transmission Modes of Mites 2. General Morphology of Mites 3. General Life History.

Meaning and Transmission Modes of Mites:

Mites are very small sized acarines (body size ranges from 0.5-2.0 mm in length) belonging to 5/6 orders. Some of these minute arthropods are ectoparasitic on animals (both vertebrates and invertebrates) and others on plants. Certain species serve as vectors for microorganisms. By far, majority of mites are free living inhabiting both terrestrial and aquatic areas.

Parasitic mites show different types of transmission modes, on the basis of which they can roughly be grouped into 3 categories:

Some mites spend their entire mode of life span on gregarious birds and mammals. They pass many generations on a single host. Transmission from host to host is direct; resulting from direct contact between hosts, e.g., feather mites, mange mites and fur mites.

Another group of mites are haematophagous and are found only on their hosts during the breeding periods. They take greater amount of blood than do the first category. They drop off their host after feeding and are found in or near the host’s nest. They frequently parasitise several hosts of the same species during their lifespan and thus are very important vectors, e.g.., nidicolous mites.

Third group of mites have greatest opportunity in each generation to parasitise several hosts of the same species or several species of hosts. These mites are attached to their hosts only while feeding. After feeding they drop from their hosts anywhere and can survive for relatively long period without a blood meal.

When ready to feed again, they climb to some vantage point (surface of soil or tip of a grass blade) and await the passing of a suitable hosts. There­fore, these acarines are very important from the stand point of disease transmission, e.g., larval chiggers.

In mites the body shows segmentation like other acarines. Dorsally the idiosoma is often covered by a single, sclerotized plate, the carapace. The gnathosoma or capitulum is usually sharply set off from the idiosome and carries the feeding appendages like chelicerae and pedipalps.

Chelicerae may be chelate (pincer-like) in scavenging and predatory mites, but in parasitic mites, they are modified to form stylets or bear teeth for piercing. Pedipalps may be leg like or chelate or reduced in size and serve as sense organs. Ventrally the fused coxae of the pedipalp extend forward to form the hypostome (Figs. 6.18 and 6.19). 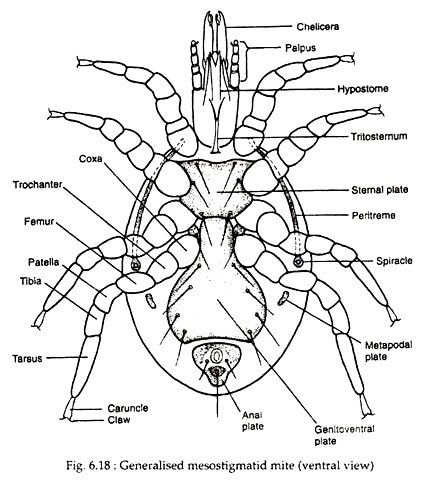 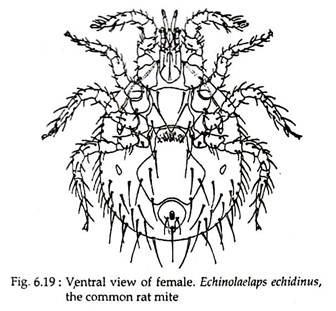 Acarines typically have four pairs of legs, but only one to three pairs may be present in some species of mites. Segments of legs are like those of ticks. The anus is near the posterior end of the body, but gonopore location is variable.

Some male mites do possess an intromittent organ or aedeagus. The gonopare opens generally through a highly scleratised area, the genital plate. Some mites have urstigmata, between the coxae of the first and second legs that act as humidity ceptors.