In this article we will discuss about:- 1. Habit and Habitat of Ticks 2. General Morphology of Ticks 3. Life History 4. Biology of Important Ticks and their Role as Vectors.

Habit and Habitat of Ticks:

Ticks’ importance as agents or vectors has long been recognised. In general, ticks are parasites of animals. Most species of vertebrates higher than fishes are subjected to attack by ticks, particularly mammals whose warm blood is highly attractive to ticks. They parasitise man and other domesticated mammals fortuitously.

The high potency of ticks in the spread of disease of man and animals are due to some factors like:

1. They are persistant blood suckers:

They attach firmly while feeding and cannot be dislodged easily. Most species have a wide range of host, thus ensuring a relatively certain source of blood.

Most species have a long life span, may be 5 years or more. It is helpful for them to carry the infection for several years.

The reproductive potential is quite high. Some species may deposit as many as 18,000 eggs. Some have the power to regenerate lost parts.

Ticks (Fig. 6.17A) are characterised by a leathery integument and larger size in comparison to mites. Body is segmented but without readily visible segments.

The body is divided into two regions:

(1) The capitulum (also referred to as gnathosoma). 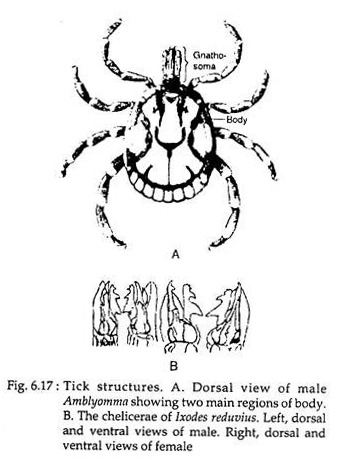 The mouth parts include 3 types of structures:

(i) Ventral to the mouth is toothed, elongated hypo-stoma, its free end projects anteriorly.

(ii) On the dorsal surface of hypo-stoma is located a pair of chelicerae, on each side of the mouth. The free terminal of each chelicera is forked (chelate), giving rise to a dorsal, fixed toothed digitus externus and lateral movable digitus internus.

The cheli­cerae function as piercing, tearing and anchoring structure by means of which the host’s integument is opened and the entire capitulum or at least the toothed hypostome is inserted into the host.

(iii) A pair of palpi or pedipalpi arises from the anteroventral margin of the basis capitulum. These struc­tures act as counter-anchors while the tick is attached to the host. The mouth-parts show characteristic differences among different species and also between male and female of the same species (Fig. 6.17B). 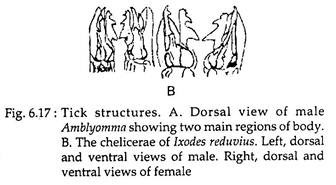 The body proper also shows differences among members of different families. However, it bears four pairs of legs; each is subdivided into six segments known as coxa, trochanter, femur, genu, tibia and tortus. In some species, some of these units are fused.

The legs characteristically terminate in a pair of claws on the tarsi. The genital orifice is located on the mid-ventro line between the first and second pairs of legs. The anus is also ventrally located, equidistant from the level of fourth pair of legs and the posterior margin of the body.

On the basis of the difference present in body proper, two families are recognised in the order Ixodida; family Ixodidae and family Argasidae. Members of Ixodidae are commonly called hard ticks while those of arganidae are known as soft ticks. The morphological characteristics of these two families are discussed in Table 6.8. 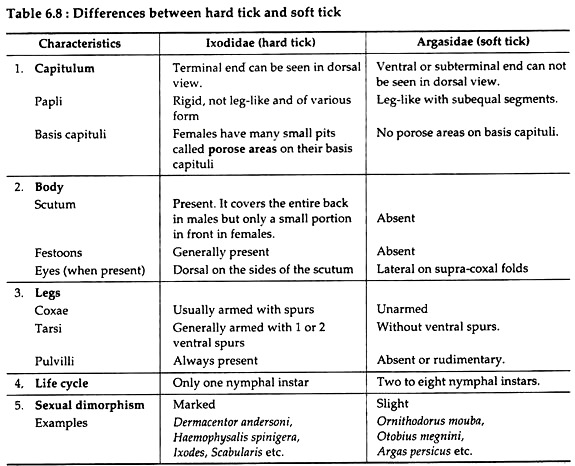 In the life cycle of all ticks, four basic stages could be recognised — egg, larva, nymph and adult. The life cycle of ticks requires 6 weeks to 3 years to complete in different species.

The gravid females drop onto the ground, where she deposits the eggs in the soil or humus. Hard ticks lay eggs in a few hundreds or even thousands, all at one time. The soft ticks lay eggs in batches of 20 to 100 over a long period. The eggs hatch in 1 to 3 weeks.

The larva of ticks possesses 3 pairs of legs. They lie in wait among grasses and herbiage till a suitable host appears to which it attaches itself. After a blood meal, it drops off, and in course of time it moults to become a nymph. The duration of the larval stage may vary from 3 to 13 days.

The nymph resembles the adult in having 4 pairs of legs, but it has no genital pore. The nymph are all blood-suckers, and they attach themselves to suitable hosts for a blood meal. Members of Ixodidae have one nymphal instar, but argasids have as many as five.

Adult ticks may live for a year or more. Soft ticks live longer than hard ticks. At the time of copulation, that occur on the host, the male ticks produce a spermatophore, which is placed under the genital operculum of the female.

Females usually require blood meal for egg production, although exceptions are there. Most opportunist ticks feed on a variety of hosts, while few are host-specific. Hard ticks can withstand a period of star­vation as long as 16 years.

The tick is called a one-host tick when all nymphal moulting through all instars occur on the same host, e.g., Boophilus sp. When the nymph drops off, moults to adult and attaches to another host, the tick is said a two-host tick. Most ixodids are three-host ticks whereas argasids with their multiple nymphal stages are many-host ticks. Use of such a series of hosts actually increases the opportunities for transmission of pathogens.

Biology of Important Ticks and their Role as Vectors:

Ixodes (family Ixodidae) is the largest genus of hard ticks consisting of over 200 species. Ixodes scapularis (formerly known as Ixodes dommini) and I. pacificus act as important vector for the lyme disease, caused by the spirochaete, Borrelia burgdorferi (see Table 6.9).

The high prevalence of lyme disease is attributed to the relatively unselected feeding habits of the tick, especially the nymphal stages, and the participation of rodent, deer, cats, chicken, lizard as reservoirs. Lyme disease is a classic zoonosis, where transovarial and transstadial passage of B. burgdorferi has been reported.

In Asia and Europe, tick-borne encepha­litis is known to be transmitted by the bite of Ixodes ricinus and I. persulcatus.

This genus (subfamily: Amblyominae, family: Ixodidae) contains about 30 species of which many are important vectors of some human diseases. Dermacentor andersoni, also known as Rocky mountain wood tick serves as the vector of Rickettsia rickettsii, the causative agent of Rocky mountain spotted fever (Table 6.9).

Following copulation, the gravid females fall off the host and in about 7 days, lay the eggs. After 35 days, the hexapod larvae known as seed ticks hatch and actively become attached to small hosts like rabbits, ground squirrels etc. Following blood sucking for a period of 3-5 days, they drop off and metamorphose into octapod nymph.

The nymph hibernates in soil; comes to surface in spring and attach to larger hosts (marmots, porcupines, etc.) on which they remain engorged for 4-9 days. After feeding, the nymph undergoes moulting to adult. The adults feed on blood of large mammals like deer, cattle, sheep and human. All stages of D. andersoni can withstand prolong starvation.

Man is usually bitten only by adult D. andersoni. The infection is acquired from the reservoir animals by a feeding tick in any stage of its life history and is passed on from stage to stage. Example, infected blood is ingested by the larva, the infection is passed into nymph and then to the adult which in turn may infect.

At least some infected adult females will pass the pathogen (R. rickettsii) through their eggs to the larvae of next generation. When normal adult ticks are fed on an infected host, just long enough to ensure ingestion of the pathogen, and then they are transferred directly to a normal host. A normal period of 9 to 12 days lie between ingestion and transmission of the pathogens.

Infection is not transmitted by the same stage of the tick that acquires it, but by the next and subsequent stages. The paghogen of Rocky mountain fever is probably transferred to the host through the salivary secretion of the tick while biting. Salivary gland of infected adult was shown to contain the pathogen.

A great majority of persons with cases of Rocky mountain fever give a distinct history of tick bite from 2 to 10 or 12 days before the onset of the disease. The percentage of ticks that contain the pathogen is reported to be very small, (not higher than 5 percent). The danger period of transmission spans from early spring to July.

The pathogen can be transovarially transmitted from female D. andersoni to offsprings. In addition to Rocky mountain fever, this tick also acts as the vector for several human diseases like tick paralysis, powassan encephalitis virus, Colorado tick fever virus and Indian tick typhus.

This genus includes more than 90 species of soft-bodied ticks. All are ectoparasites on mammals. One of the most dreaded tick of this genus is Ornithodoros moubata, which is the vector for Spirochaeta duttoni, the pathogen that causes African relapsing fever.

Other important vector species of Ornithodoros are tabulated in Table 6.10. 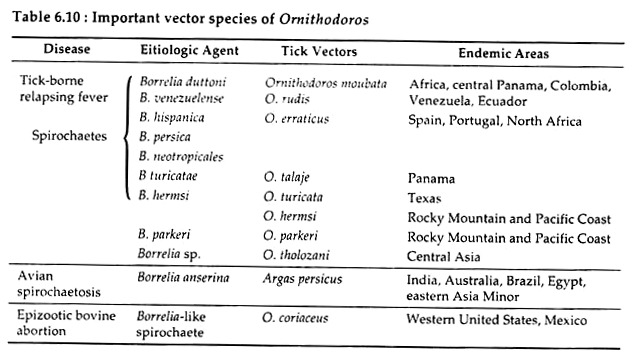 Adult O. moubata are eyeless, measuring from 8 to 11 mm in length – dusty brown to greenish in colour. They usually remain hidden in the dust and crevices of huts, and feed chiefly at night and engorge rapidly. Eggs are deposited in batches of 35 to 340, at intervals after blood meals during the lifetime of the females.

The incubation period lasts from 7 to 11 days and over. Larvae are totally quiescent with legs closely applied to the body. Within a few hours larvae moult by splitting egg shell to the first nymphal stage. They pass about 5 moulting stages before getting sexual maturity. This species feeds on man, chicken, pigs, rats, rabbits and on some wild animals like warthogs and porcupines etc.

O. moubata appear to be essentially a parasite of man. It is a man-to tick-to man vector of relapsing fever. The newly hatched ticks proved to be infective. Once infected, the ticks remain so, and the infection may be transmitted from generation to generation (at least for 3 generations).

Shortly after the spirochaetes are ingested by the ticks, they penetrate the stomach wall and reach the body cavity where they multiply. The pathogens then invade salivary glands and coxal glands of the ticks. From the saliva and coxal fluid the spirochaetes may be introduced into the bite would caused by the ticks on the host’s skin or even the pathogen can penetrate the unbroken skin of the host.

The infection is transmitted by the bite of either the male or female ticks during all its active stages. The attack of the fever in human takes place from 5 to 10 days after the tick has bitten.