In this article we will discuss about the fin system of fishes with the help of suitable diagrams.

There are mainly two types of fins in fishes:

(1) Unpaired or median fins and

Both the unpaired median and paired fins are supported by skeletal rods called radials and dermal fin rays. A great variety of fins is observed in fishes. The diversity in fin system in fishes is due to their adaptive responsiveness.

Fish swim mainly by lateral movement of tail and tail fin. Other fins are mainly used as steering devices and rudders. When the body is at rest, the paired lateral fins serve to maintain equilibrium. Fins are also modified to serve other purposes. Lung-fishes use them as legs in walking.

The first chordates lacked paired appendages but it is universally accepted that tetrapod limbs arose during evolution from the fins of fishes. However, clues to the origin of fins themselves have remained obscure and unresolved. The median or unpaired fins in fishes are believed to have originated from a continuous fold of tissue.

These folds extend from the posterior region of the head and continue posteriorly around the tail and extend up to anus. This fold of skin is supported by a series of parallel cartilaginous rods. During the course of development each supporting rod divides into a lower basal piece, embedded in the body wall and an upper radial piece, lying in the fin fold.

Several theories have been advanced to explain the source and manner of origin of fins (Figs. 17.2 and 17.3): 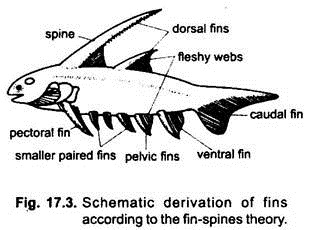 According to the gill-arch theory of Gegenbaur proposed in the nineteenth century, the paired fins are modified gill structures, the girdles represent the gill- arches and the fin folds with their skeleton represent gill-flaps or septa.

The position of the pelvic fins can be explained on the assumption that some of the posterior gill-arches have been shifted posteriorly. This idea finds no support from morphological, embryological and palaeontological studies.

According to Graham Kerr, paired fins and their skeleton are derived from external gills which occur temporarily in some larval forms. However, this theory has no supporting evidence.

This theory was first proposed by Balfour and Thacher and later supported by Mivart. A number of eminent vertebrate morphologists like Wiedersheim, Haswell, Regan, Sewertzoff Osburn and Goodrich have presented several evidences in support of this theory. According to this theory, the paired fins have originated from a paired lateral continuous fin-folds running down each side of the body behind the gill-openings up to the end of the tail.

Some of the evidences are:

(i) Basic skeletal structures of paired and unpaired fins are similar indicating a common mode of origin,

(ii) In the embryos of certain elasmobranchs, early stages show continuous series of muscle bands which disappear, except those forming the isolated paired and unpaired fins.

(iii) In some extinct Devonian acanthodian sharks, a row of numerous small accessory spiny fins on either side between pectoral and pelvic fins, have been interpreted as remnants of fin-folds.

(iv) In the extinct shark Cladoselache, the pectoral and pelvic fins are broad, without basal notches and supported by parallel cartilaginous rods (pterygiophores) suggesting a primitive fin-folds-like origin,

(v) In Climatius, there was a series of smaller spines and finlets between the pectoral and pelvic fins. This suggests that they were originally joined by a continuous fold.

The idea of the fin-fold origin of the paired and unpaired fins in fishes is supported by anatomical, embryological and palaeontological evidences. This theory was accepted by most of the workers in this field of research.

According to this theory, recent workers claim that the so-called “several pairs of fins” in acanthodians indicate nothing but a special kind of multiplication of the defensive spines, which may often support membranous structures. Subsequently all spines and webs may have been lost except one anterior and one posterior pair which later evolved into pectoral and pelvic fins.

Furthermore, no true primitive fossil fish with completely continuous fins is still known. This observation compels the recent workers to discard the fin-fold theory. They suggest that the fin appeared probably in connection with some paired and unpaired median spines, as found in many ostracoderms. In course of evolution membranous structures appeared between these spines and the adjacent body wall.

Some ostracoderms possessed lateral fleshy lobes, projecting from either lateral side. They may have been the precursors of pectoral fins. Other ostracoderms had ventro-lateral rows of dermal spines similar to extra fins of acanthodians. Most of these spines were lost while some were retained in the pectoral and pelvic regions, thus, accounting for the origin of paired fins (and limbs) from ostracoderm ancestors.

Of the unpaired fins, the caudal fin is well developed in most fishes because it plays the most important role in forward propulsion during swimming. The caudal fin in most of the fishes is highly developed with few exceptions like Hippocampus and some of the eels. In Hippocampus (sea horse) the tail is prehensile.

In bottom dwelling rays, the caudal fin tends to become reduced and in the sting rays the caudal fin is lacking. The caudal fin exhibits different shapes in different groups of fishes correlated with their habits, so that it is of great importance in classification of fishes. Three main types of caudal fins are found in fishes. 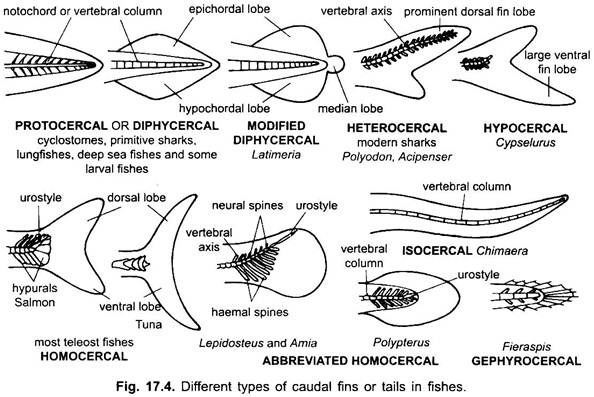 This type of caudal fin is regarded to be the most primitive type it is not exhibited by many living fish. The vertebral column extends up to the tip of the tail and divides the caudal fin into two equal halves. The dorsal half is called epichordal lobe and the ventral half is known as hypochordal lobe.

In Chimaera and some deep sea fishes, the caudal fin is called isocercal (Gr., iso = equal) which is very much elongated and symmetrical. Latimeria and extinct coelacanths have unique symmetrical three-lobed tail with a marked median lobe. In the living dipnoans, the caudal fin is of protocercal type. Presence of protocercal tail in some highly developed fishes is possibly due to its secondary modification.

It is the intermediate type in which vertebral column bends upwards and reaches up to the tip of the more prominent dorsal lobe, thus, making the caudal fin strongly asymmetrical (Gr., heteros = different, other).

The opposite of heterocercal condition, in which the vertebral column terminates into a larger ventral lobe, is known as hypocercal (Gr, hypos = under, beneath) type. Hypocercal caudal fin is peculiar to flying fish, some primitive fishes and (fossil agnatha) ostracoderms. In flying fish (Cypselurus), the larger ventral lobe enables the fish to attain maximum speed for gliding as it leaves the water.

This is the advanced and most common type of caudal fin. The homocercal (Gr., homos = common, alike) caudal fin is the characteristic of the higher bony fishes (teleosts). It is symmetrical externally but internally it is asymmetrical. The posterior end of vertebral column is turned upwards and becomes greatly reduced. The tip of vertebral column do not reach the posterior limit of fin.

There is no apparent dorsal lobe but the ventral lobe is greatly enlarged and divided into two equal superficial lobes. Most of the teleosts retain the typical homocercal condition, but in some forms this condition is slightly modified.

In Fieraspis and Orthagoriscus, the caudal fin completely disappears forming a gephyrocercal caudal fin. In chondrosteans (Polypterus, Amia, Lepidosteus) the vertebral column is a bit elongated and upturned, also with or without an upturned fleshy lobe. This is called abbreviated homocercal caudal fin. Most of these variations represent an intermediate stage between heterocercal and homocercal types.

The protocercal or diphycercal type of caudal fin is considered as the most primitive type, the heterocercal as the intermediate stage and the homocercal condition represents the advanced stage.

In many teleosts, the caudal fin starts as diphycercal then becomes heterocercal and finally assumes the homocercal condition. The transition between three types of caudal fins in the developmental history of fishes is significant from the phylogenetic point of view.