Labeo rohita (Rohu) is commonly found in freshwater ponds, lakes, rivers and streams. It is principally herbivorous and bottom feeder, feeding on algae and aquatic plants. It breathes by means of gills and also frequently comes to water surface for gulping air into the air bladder. It is oviparous, breeding occurs in running water in July and August. Fertilisation is external, i.e., in water.

The rohu has a spindle-shaped body. Its body colour is blackish on the dorsal side and silvery on the ventro-lateral sides. It measures up to 1 metre in length and weighs about 20 to 25 kg. The body is divisible into head, trunk and tail.

Head extends from tip of snout to the posterior margin of operculum. Snout is depressed, obtuse and project beyond the jaws. A pair of nostrils are present on the dorsal surface of snout.

Mouth is a crescentic transverse subterminal slit bounded by thick, fleshy upper and lower lips. Eyes are large, laterally situated and have no eyelids. One pair of small delicate maxillary barbels are usually present on the dorso-lateral sides of the mouth. Rostral barbels are usually absent. Operculum is thin, large, and plate-like gill cover on either lateral, posterior side of the head. 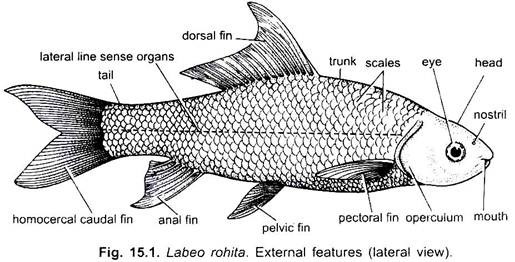 It is elongated and oval in cross section, i.e., broad in the middle and narrow towards the dorsal and ventral sides. The trunk is covered with thin, dermal plate-like overlapping cycloid scales. On either lateral side of the trunk is present the lateral line, which also extends over the tail.

The scales along the lateral line contain pores which communicate with the tubular canal. The canal possesses the sensory organs, the rheoreceptors which are sensitive to current of water. At the posterior end of trunk, mid-ventrally there are three small apertures in a line: anterior anus, middle genital and posterior urinary.

(i) A dorsal fin located on the mid-dorsal line of trunk, roughly over the middle of the body,

(iii) Tail fin or caudal fin over the tail. It is homocercal with two equal lobes.

The part of the body behind the urinary aperture is the tail. It is laterally compressed and narrow behind. The tip of tail bears homocercal caudal fin which is deeply defied into two similar lobes. Tail with caudal fin acts as a locomotor organ.