In this article we will discuss about the external features of lamprey with the help of suitable diagrams. Also learn about its habit and habitat.

The body of Petromyzon is divisible in three regions, viz., head, trunk, and tail, which are not clearly demarcated. The head and trunk are nearly cylindrical and the tail is more or less laterally flattened. 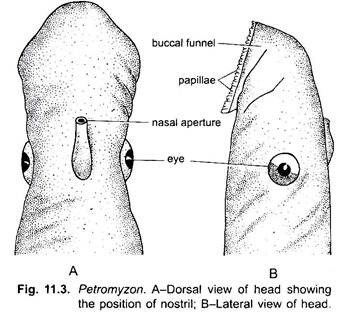 On either lateral side of head is present a well developed eye having no eyelids, but are covered by a transparent area of skin.

(i) Mouth lies at the apex of the buccal funnel bordered by a ring of cartilage.

(ii) Nostril or nasohypophyseal aperture is single located mid-dorsally over the head in between the two eyes.

(iii) Just behind each eye are present a row of seven rounded external gill-slits.

(iv) At the junction of trunk and tail, on the ventral side is present a slit-like depression, the cloaca. Protruding through the cloaca is a urinogenital papilla bearing at its tip a minute urinogenital aperture. Anus lies just in front of papilla within the cloacal depression.

(v) Along each lateral side of the body and below the head are present numerous small sensory pores of the lateral line septum. In male Petromyzon is present an eversible penis.

Lampreys (Petromyzon) are both freshwater and marine forms. Its larval stage called ammocoete is a freshwater, sedentary, and filter feeding creature like Amphioxus. While some adult freshwater forms are free-living but the others are ectoparasitic on fishes and turtles. The lampreys are all carnivores, and although they are sometimes spoken as quasi-parasitic, they should properly be regarded as true predators, for they actually catch and eat their prey. 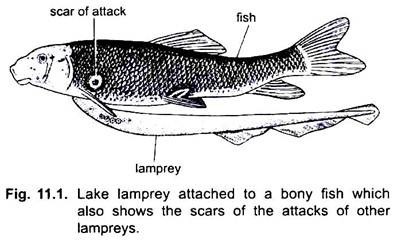 The method of feeding is peculiar and quite specialised. Lampreys are swift swimmers, capable of overtaking slower prey. The animal attacks fishes, turtles, etc., of many sorts, usually larger than itself It attaches itself by means of its circular mouth.

Lampreys usually live in sea and migrate to the rivers for the purpose of spawning. After spawning they usually die. In the river the lampreys do not eat anything, but live on the accumulated subcutaneous fat that provides the nourishment. They migrate to the river usually in autumn, while the sexual maturity attained in winter. But the breeding occurs in spring.

A freshwater lamprey, Petromyzon marinus unicolor migrates a few miles upstreams for the purpose of spawning. The brook lampreys (represented by the genus Lampetra) have the peculiar habit of nest-building at the bottom of the river where the eggs are laid. They select the bottom where both sand and stones are present. By the action of the suctorial mouth, they arrange the stones in such a fashion that a small depression is produced at the centre. Fertilisation is external.