In this article we will discuss about:- 1. Origin of Rohu Fish 2. Systematic Position 3. Distribution 4. Economic Importance.

Class Osteichthyes (Gr., osteon = bone + ichthyes = fish) includes the ray-finned “bony fishes”, both marine (e.g., cod, sole, herring, eels) and freshwater. Subclass Actinopterygii of class Osteichthyes are the commonest vertebrates of today. Its another subclass Crossopterygii includes today only four genera having a few species. The Actinopterygii get their name from the structure of paired fins. Today’s actinopterygians are more advanced having streamlined body.

The structure of scales is ganoid. The tail is homocercal or more rarely diphycercal. More advanced species have lost spiracles, abdominal pores and a spiral valve in the gut. The actinopterygians in general show no trace of internal nostrils. Gills are filamentous. In heart, elastic bulbus arteriosus has been evolved in exchange of conus arteriosus. The conus becoming reduced to one or, at most, two rows of valves.

The actinopterygians seem to have arisen in freshwater, as did other bony fishes, and later some invaded the sea in Palaeozoic times. Labeo rohita is a common Indian freshwater bony fish. The following description relates to Labeo rohita. This fish is studied as the type specimen of bony fishes in many Indian Universities. 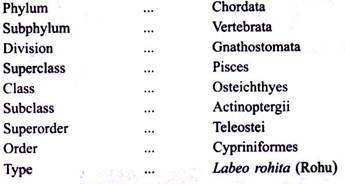 Labeo is a tropical genus of carps distributed in tropical Africa and East Indies. Roughly two dozen species of Labeo are found in India. The most common is Labeo rohita (rohu) and Labeo calbasu (kala bans) which inhabit throughout India, Bangladesh and Pakistan.

Labeo is a large genus having several species which are of considerable importance as an article of food. Labeo rohita (rohu) is perhaps the commonest of Indian fish and most generally esteemed for eating purposes. It is also a much domesticated freshwater fish because of its excellence as food.