In Labeo, respiration is aquatic, occurring with the help of gills.

In Labeo, there are four pairs of gills present in the branchial chambers covered by operculum. Each gill has a double row of gill-filaments or branchial-filaments supported by gill-arch. Each gill filament bears numerous minute transverse lamellae covered with thin epithelium. These lamellae contain capillaries of afferent and efferent branchial arteries. The four pairs of gills are borne on the first four branchial arches.

In Labeo and other teleosts the gill-filaments are attached to a very much reduced interbranchial septum. Thus, this type of gill is called pectinate or filiform. The fifth gill arch bears no gill-filaments. On the inner surface of operculum is a comb-like body, the pseudobranchia, formed of a single row of branchial- filaments, and representing either the vestigial gill (hemibranch) of the mandibular arch or the spiracular hemibranch.

Thus, there are 4 holobranchs attached to first four branchial arches and 5 gill-slits on either side covered by the operculum. The pharyngeal (inner) border of each gill- arch has spinous processes, called the gill-rakers which do not allow the food particles to enter into the branchial chamber.

During inspiration, outer opening of the gill-chamber remains tightly closed, i.e., opercula and the branchio-stegal membranes attached to the posterior margin of operculum, press upon the body to close the other opening. The branchial-arches and the opercula bulge laterally increasing the volume of bucco-pharyngeal cavity. Thus, the water flows in through the opened mouth to fill the enlarged bucco-pharyngeal cavity. 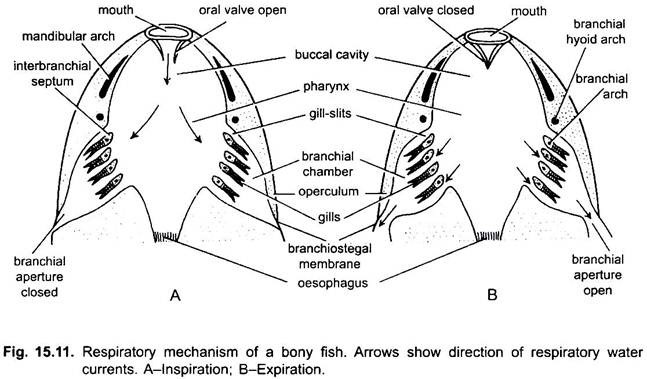 Asphyxiation occurs when water is deficient in oxygen content or the fish is kept out of water for a long time. Due to asphyxiation the fish dies.