In this article we will discuss about the respiratory system of Channa Punctatus with suitable diagram.

Respiration is performed by four pairs of gills, situated in the gill chambers, and accessory respiratory organs. These two chambers are covered externally by the oper­culum. A branchiostegal membrane is attached to the posterior margin of the oper­culum and helps the operculum to make air tight gill-chambers.

The wall of pharynx is perforated by five gill slits on each side and are separated by four gill arches or inter­branchial septa.

Each gill arch is provided with teeth-like gill rakers on the inner concave border and two rows of comb-like gill filaments on the outer convex border (Fig. 1.53). The gill rakers present in the inner borders of the gills, prevent the escape of food materials from the pharyngeal cavity to the gill chamber. The gills are holobranchs, i.e., each gill arch bears two rows of gill fila­ments. 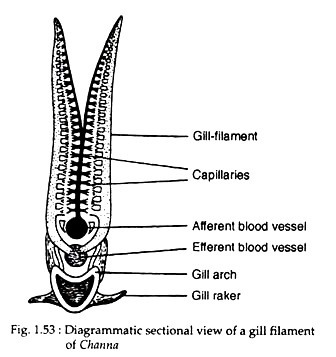 Channa Punctatus utilizes the oxygen dissolved in water. The physical mechanism of respiration can be described under two sequences (Fig. 1.54):

During inspiration, the outer opening of the gill chamber remains tightly closed to the body wall by the branchiostegal membrane and the two opercula bulge out to increase the accommodating capacity of the pharyngeal and buccal cavi­ties. As a consequence, water from exterior rushes inside through the opened mouth and fill in the buccopharyngeal cavity (Fig. 1.54A). 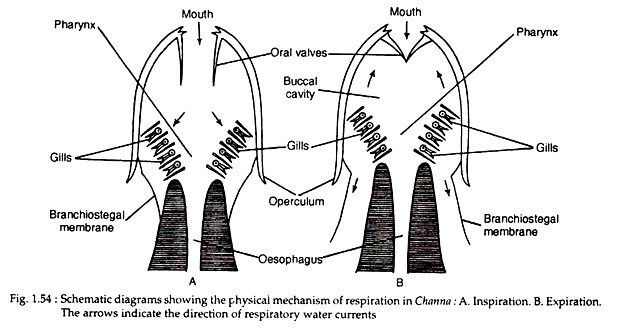 Immediately on the entry of water, the pharyngeal and the buccal cavities contract and exert pressure to the contained water. As the mouth, by this time, becomes closed by oral valves (Fig. 1.54B), the con­tained water finds the way out through the gill slits.

The operculum as well as the branchiostegal membrane are lifted by this time and the water from the gill chambers goes out through its opening. The dilatation and the contraction of the pharyngeal cavity are caused by the alternate retraction and pro­traction of the hyoid arch supporting the buccopharyngeal cavity.

During the transit of water through the gill slits, the deoxy­genated blood in the capillaries of the gill filaments takes oxygen dissolved in water and gives out carbon dioxide by diffusion. The blood thus aerated, is collected by effe­rent branchial arteries and is conveyed to the different parts of the body.

In Channa Punctatus, the accessory respiratory organs consist of a pair of air-chambers called supra-branchial cavity. These are developed from the pharynx (Fig. 1.55). The air-chambers are lined by thickened epitheli­um which is highly vascularized. These are simple sac-like structures and do not contain any structure. These cavities function as the lung-like reservoirs. 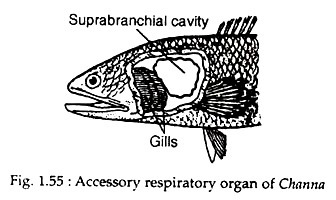