In this article we will discuss about the external structures of scoliodon. This will also help you to draw the structure and diagram of scoliodon.

The dorsal side of Scoliodon is dark-grey while the underside is pale white. Tail is oval in cross-section and bears a heterocercal type of caudal fin, i.e., the posterior end of the vertebral column is bent upwards and lies in the dorsal or epichordal lobe. Mouth is a very wide crescentic aperture lying on the ventral side of the head near its anterior end.

It is bounded by upper and lower jaws; each is beset with one or two rows of sharply pointed and backwardly directed teeth (Fig. 1.28B) to catch the slippery prey. The teeth are replaced if these are broken. The teeth of Scliodon are modified scales. The scales cover its body and extend inside the jaws to serve as teeth (Fig. 1.28C). The transition of the pla­coid scales into teeth is amply recorded in the jaw regions. 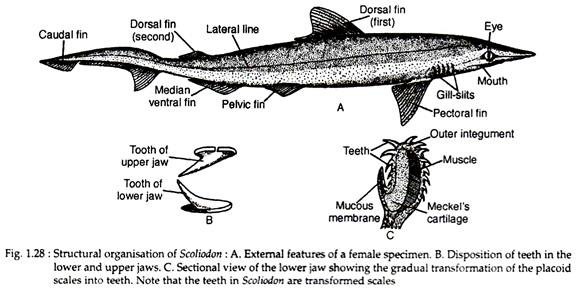 Two prominent circular eyes are present. Each eye is provided with movable upper and lower eyelids. The third eyelid or nicti­tating membrane can cover the whole eye in emergency. The pupil is a vertical slit-like aperture. The nostrils are placed one at each angle of the mouth.

These are exclusively olfactory in function and have no connection with the mouth cavity. Each nostril is partly covered by a small fold of skin. Posterior to the eyes there are five vertical slits on each side. They are called gill or branchial slits. The branchial slits lead into the gill pouches which in turn open into the pharyngeal cavity.

The abdo­minal pores are paired structures and situated on elevated papillae to communicate the coelom to the outside. A faint lateral line is present. Beneath this line a canal is present. The canal opens to the exterior by minute pores at intervals. Many pores called ampullary pores are also present on the head.

The fins under this category include two dorsals, one caudal and one ventral fin. The dorsal fins are triangular in outline. The anterior dorsal is larger and situated at about the middle of the body. The posterior dorsal is comparatively small and occupies a median position between the first dorsal and the tip of tail.

The caudal fin has one ill-developed ventral lobe (hypochordal) which is divided into two parts. Two shallow depressions called caudal pits are regarded as the diagnostic features of the genus. These are present at the root of the tail, one at the dorsal and another on the ventral surface. The median ventral fin is located in the mid-ventral line and just anterior to the caudal fin.

Two pectoral and two pelvic fins constitute the lateral paired fins. The pectoral fins are large and are situated posterior to the gill clefts. The pelvic fins are much smaller. In females, these are simple but in males each of them is connec­ted with a copulatory organ called myxipterygium or clasper. Clasper is rod-like in appearance having a dorsal groove leading to a siphon at its base.

The dermis is composed of three layers:

The stra­tum laxum is the outer layer and lacks fibres. The median layer is the stratum compactum which is fibrous in nature. The basal plate of the placoid scale is tied to this layer by fibres. The subcutaneous layer is variable in thick­ness and contains fine fibres arranged in a reticular fashion.