In Dogfish (Scoliodon), the respiration is aquatic, since the animal resides in water. It breathes by means of gills borne in a series of gill-pouches on either lateral side of the pharynx. Water enters the mouth and after passing through the buccal cavity, pharynx, gill- pouches bearing gill-lamallae, goes out through the external gill-slits after bathing the gills.

There are five pairs of gill- pouches bearing gills, arranged in a series behind the hyoid arch in the lateral walls of the pharynx. Each gill-pouch is compressed antero-posteriorly and communicates with the cavity of the pharynx through a large internal branchial aperture and with the exterior through a narrow external branchial aperture (commonly called gill- slit). The endodermal mucous membrane of gill-pouches or interbranchial septa is raised into a series of horizontal folds to form lamelliforms branchial lamellae or gill-filaments. 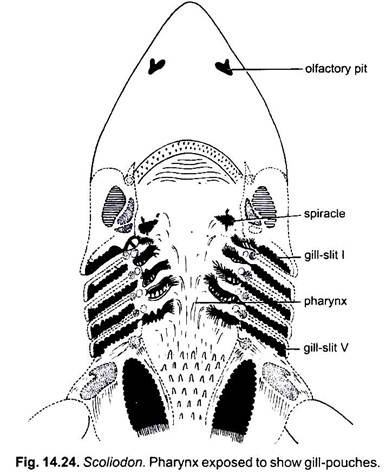 The branchial lamellae have a rich blood supply, and they have a very thin covering membrane through which blood is exposed to sea water for an exchange of gases. Each gill-pouch has two sets of gill-lamellae, one on its anterior wall and the other on the posterior.

The interbranchial septa extend well beyond the branchial lamellae, then each bends posteriorly to form a flap which protect the lamellae as well as external gill-slit. The inner part of each interbranchial septum has a supporting cartilaginous visceral arch with slender gill-rays. Visceral arches also give out rigid comb-like gill-rakers which project inwards to protect the internal branchial apertures from entering the food.

The posterior hemibranch of a septum has longer lamellae than the anterior one. Thus, a gill-pouch has two demibranchs belonging to two adjacent gills. In Dogfish (Scoliodon), the hyoid arch bears only a hemibranch on its posterior surface, the first four branchial arches has holobranchs and the fifth branchial arch is without any gill (abranch). Thus, it has nine hemibranchs. 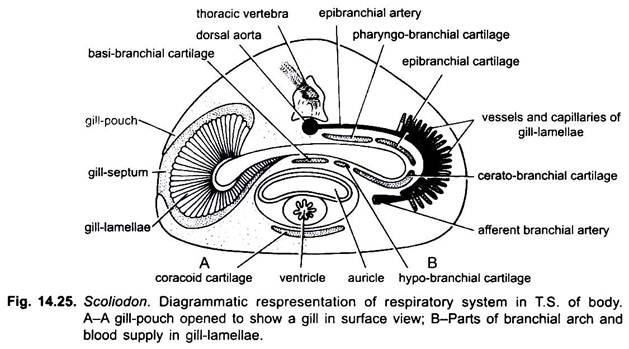 Between the mandibular and hyoid arches or the first internal gill-slit on either lateral side of pharynx is a spiracle. In most elasmobranchs the spiracle bears minute branchial lamellae forming a false gill or psendobranch and opens to the exterior by an external branchial aperture. It is supplied with arterial blood and plays no part in respiration. But in Dogfish (Scoliodon) the spiracles are vestigial pits in the pharynx with no lamellae and external branchial apertures.

The floor of the buccopharyngeal cavity is depressed by the contraction of hypobranchial (hypoglossal) muscles due to which the visceral arches expand the wall of the pharynx, so that sea-water containing dissolved oxygen rushes in through the opened mouth. Entry of water into external branchial apertures is prevented by an anterior fold of skin on each gill-pouch. 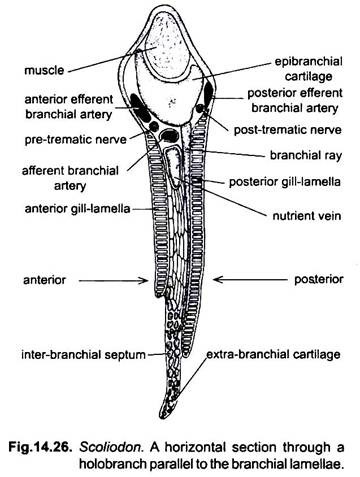 During expiration the mouth becomes closed by the action of adductor muscle. Now the buccopharyngeal floor is raised, and contractions of the wall of the pharynx force the water into internal branchial apertures, the oesophagus being closed, and then into gill-clefts, where it washes the branchial lamellae and goes out of the external branchial apertures. The respiratory movements are caused by pharyngeal muscles which are innervated by V, VII, IX and X cranial nerves and the hypoglossal spinal nerve.

In the branchial lamellae the blood flows from the tip towards the base, that is in a direction opposite to that of the water current, so that the blood just before leaving the lamellae meets the highest concentration of oxygen and the lowest of carbon dioxide, thus, an efficient exchange of oxygen and carbon dioxide takes place between the blood and sea-water. 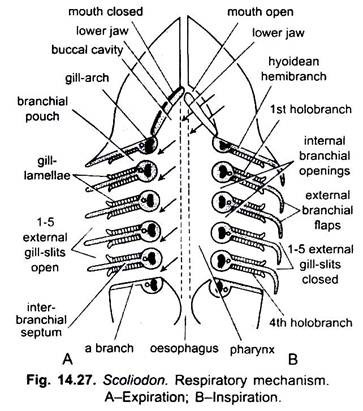 Fresh sea-water entering the gill- pouches with the respiratory current contains oxygen dissolved in it. This water is separated from the blood contained within the capillaries of the gill-lamellae merely by the thin and permeable membranous walls of the capillaries. The oxygen of the water passes by endosmosis through the thin capillary walls into the blood, and at the same time the carbon dioxide of the blood passes into the water by a process of exosmosis.

The oxygen is conveyed by the blood to all the parts of the body, while carbon dioxide brought to the gills in the venous blood is eliminated by the water of the outgoing respiratory current. As the blood makes a complete circuit in the capillaries of the gills in a very short time, it is evident that exchange of gases also takes place very quickly.