In Palaemon, three sets of organs help in respiration which are:

These organs are enclosed within a special chamber, the gill chamber, lying on each side of the cephalothorax. The gill chamber is covered by the lateral extension of carapace called gill-cover or branchiostegite.

The gill chambers can open vertically, anteriorly and posteriorly:

Being highly vascularized, the inner lining of the branchiostegite serves as respiratory surface. In this lining, gaseous exchange takes place between the blood lacunae and surrounding water.

Three pairs of small, vascularized, leaf-like membranous struc­tures called epipodites are present on the coxal segment of each maxilliped. These organs lie in the anterior part of the gill- chamber and carry out respiratory functions like the primitive gills.

Gills are primary respiratory organs in prawn. On each lateral side of the cephalothorax and beneath the branchiostegites, there are eight gills, each attached with the thoracic wall by a gill-root. Seven of these eight gills are serially arranged, while the eighth gill remains concealed under the second one on its dorsal side (Fig. 2.57).

The gills are crescent-shaped and their sizes increase gradually from the anterior to the posterior direction (Fig. 2.58). Each gill has a slender axis or base on which double rows of rhomboidal leaf-like gill-plates are arranged like the pages of a book. These types of gills are called phyllobranch.

Histo­logically, the gill base has three layers — the outer most cuticle the middle epidermis and the inner most connective tissue mass. Each gill-plate consists of mono layer of two types of alternately arranged cells — pigmented and transparent. This cell layer remains cov­ered by cuticle on either side. 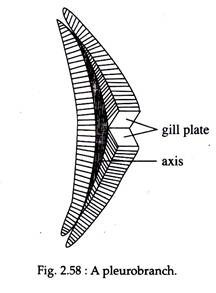 According to the position of origin, the gills are of three types:

(i) Podobranch (Greek: podos, foot; branch, gill) — the first gill from anterior side is podo branch which remains attached with the coxa of the second maxillipede.

(iii) Pleuro-branch (Greek: Pleuros, side) — attached with the outer border of the thorax and over the articulating surface of the walk­ing legs. Third to seventh gills are pleuro­-branch.

In prawn, the gills are highly vascular. Two lateral and one median longitudinal blood channels pass throughout the length of gill base. The lateral channels are intercon­nected by numerous transverse channels (Fig. 2.59).

Slender marginal channels origi­nate from the lateral channel and cover the entire margin of each plate. It then opens within the median channel (Fig. 2.59). The gills receive deoxygenated blood through afferent branchial channels.

Each branch of afferent channel opens within the transverse channels, from where the blood passes to the lateral longitudinal channels and is subse­quently distributed within the gill plates through the marginal channels. Following oxidation, the blood from the marginal chan­nels returns to the median channel and then to the efferent branchial vessels, which con­vey it to the heart.

The course of blood flow through the gill is as follows: 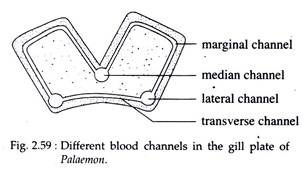 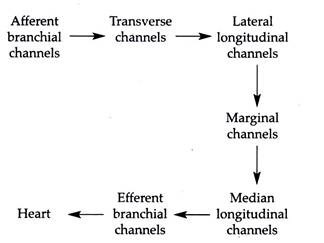 The course of blood flows through the gills of prawn.

Mechanism of Respiration in Prawn:

During the flow of water currents, the vascularized surface of branchiostegites, gills and epipodites are bathed in water and gaseous exchange occurs through these areas, that is dissolved oxygen is taken in and carbon-dioxide passes out.

The carbon- dioxide mixed water is expelled out through the ventral region of the gill-chamber due to the movement of scaphognathite and epipodites. In prawn, the respiratory pig­ment, haemocyanin is dissolved in plasma and carries oxygen to the tissue cells.