Pila commonly known as pond snail or apple snail is a gastropod mollusc. They inhabit fresh water pond and lake. They live most of the time in water but can also thrive well on land. So they are really amphibious in nature and exhibit double mode of respi­ration i.e., absorb oxygen from water during aquatic respiration and utilize atmospheric air while living on land.

In Pila a single ctenidium is situ­ated on the dorsolateral wall of the branchial or right chamber of the mantle cavity (Fig. 2.61). The gill consists of numerous triangu­lar lamellae or leaflets, arranged in a single row running parallel to one another along the central axis of the gill. This type of gill is called monopectinate type (Fig. 2.62).

The basal end of each lamella is attached to the pallial epithelium of the mantle wall and the other end hangs freely in the branchial cham­ber. In the middle of the gill, the lamellae are large in size, while it decreases towards the two ends (Fig. 2.62). 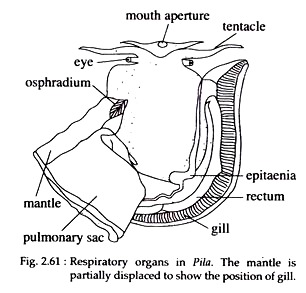 Histologically each branchial lamella is composed of two layers of epithelia suppor­ted by muscle fibres and connective tissues.

Each epithelial layer consists of three types of cells:

Both afferent and efferent blood vessels lying along the axis of the gill supply blood to the lamellae through fine vessels and capillaries. The efferent vessel carries oxygenated blood to the heart.

Mechanism of Aquatic Respiration in Pila:

In aquatic respiration, a current of water con­taining oxygen is drawn in by the left siphon .into the mantle cavity. The water then flows over the gill by the help of ciliated epithelia. Exchange of gases take place between the water and the blood vessels of gill.

The water is expelled from the mantle cavity through the right siphon. Two fleshy projections over the foot, called nuchal lobes form the respi­ratory siphon during aquatic respiration in Pila (Fig. 2.64).

If the oxygen concen­tration of water gets reduced, Pila comes out of water and respire by taking in air with the help of pulmonary sac. A comb-like sense organ called osphradium, close to the left nuchal lobe helps the animal to estimate the oxygen concentration in water.

The dorsal wall of the pul­monary sac is highly vascular and helps directly in gaseous exchange. Histologically, the sac is composed of outer epithelial layer, middle muscular and vascular connective tissue layers and inner endothelial layer (Fig. 2.63b).

It takes place in two ways:

Pila can respire through the pulmonary sac while it remains in water. To inhale the atmospheric air, it comes to the surface of the water. It then expands the size of the left nuchal lobe, both in length and breadth and rolls up to form an elongated respiratory tube.

The outer end of the tube extends beyond the level of water and sucks in air from the atmosphere. The inner end of the tube comes in contact with the opening of the pulmonary sac. The alternate contraction and dilation of the mantle wall and the pul­monary sac help in the process of respiration.

Following the exchange of oxygen and car­bon dioxide, from air to the blood vessels of pulmonary sac and from blood vessels to air, the expelled air goes out of pulmonary cham­ber through the respiratory tube. During this exchange, the branchial chamber remains completely separated from the pulmonary chamber by the epitaenia which comes in contact with the roof of the mantle (Fig. 2.64).

During dry season, when the water level gets reduced, or while living on land, Pila does not use any respira­tory tubes or siphons. The pulmonary sac directly becomes filled up with atmospheric air to facilitate aerial respiration.

The shell remains closed completely with the help of operculum during the time of aestivation, when Pila respires with the little amount of stored air kept in the pulmonary sac. Hemocyanin, dissolved in plasma acts as the respiratory pigment in Pila.