In normal condition an animal body requires enormous amount of oxygen to satisfy the demands of the energy yielding oxidative phosphorylation reactions. Various respiratory pigments serve to carry the necessary oxygen from the atmosphere to different parts of the body. Of the several pig­ments, haemoglobin is the most efficient in transporting respiratory gases.

Haemoglobin molecule has high affinity for oxygen and the attachment of oxygen to haeme is readily reversible. Here transport mechanism of oxygen and carbon dioxide of mammalian system will be discussed. In the alveoli of lungs, haemoglobin comes to direct contact with a rich supply of oxygen (100 torr) and is converted to oxyhaemoglobin.

Oxyhaemoglobin does not transfer all of its oxygen to the tissue cells. In human, normally, every 100 ml of arterial blood combines with about 19 ml of oxygen. In the resting individual, the venous blood carries about 12 ml of oxygen per 100 ml of blood.

Therefore, more than 60% of the haemo­globin in venous blood is still remaining combined with oxygen. If a person is engaged in strenuous exercise, his oxygen demand becomes high. In this case the per­centage of oxyhaemoglobin in the venous blood may fall as low as 25%. 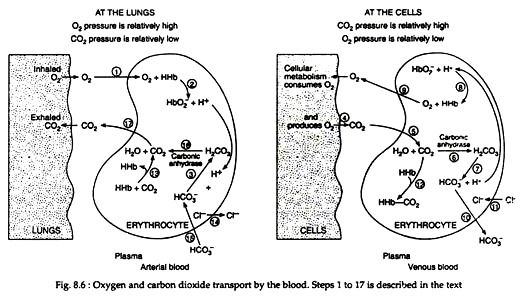 Atmospheric oxygen is taken into the lungs, where a difference in pressure exists between the alveoli and the capillaries (Fig. 8.6). Different steps of O2 and CO2 trans­port in lungs and cells are represented in Fig. 8.6 as 1 to 17. These steps are described here. Oxygen diffuses into the red blood cell (1), where it combines with haemoglobin (HHb), to form oxyhaemoglobin (HbO−2)(2):

Two factors tend to shift this equilibrium to the right.

(1) High oxy­gen concentration in the lungs,

(3) The oxy­haemoglobin is then carried to the tissues, where CO2 is being produced as a result of cellular metabolism

(8) Which is concomitantly split into oxygen and haemoglobin. Because the oxygen pressure is greater in the capillaries than in the tissues, the oxygen diffuses into the tissue cells

(9) To be utilized in the oxidative reactions of metabolism. As the bicarbonate ion concentration increases, the ions diffuse out of the RBC into the plasma

(10) The loss of negative ions by the cell is then balanced by the migration of chloride ions into the cell from the plasma. The process, referred to as the chloride shift

(11) Brings about a re-establishment of electrolyte equilibrium. Most of the carbon dioxide is taken to the lungs as bicarbonate ions (~90%), but some combines with haemoglobin

(16) These CO2 are trans­ferred to the lungs

(17) To be expelled and the cyclic process repeats itself.

Some Details of the Gaseous Transport:

Each tetramer of the haemoglobin binds four oxygen molecules (one oxygen molecule in one subunit of haeme). The oxygen satu­ration curves are sigmoidal in nature (Fig. 8.7). Binding of O2 is accompanied by the rupture of all four subunits (Fig. 8.8). Subsequent oxygen binding is facilitated, since it involves rupture of fewer salt bonds. 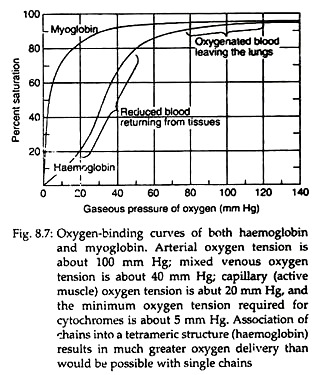 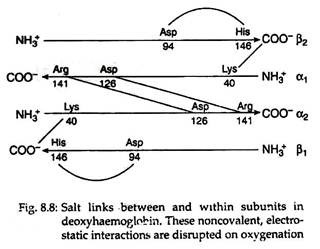 This is why O2 binds to haemoglobin depends on whether other O2 molecules are present on the same tetramer. If O2 is already present, binding of subsequent O2 molecules occur more readily. This property is known as cooperative bind­ing kinetics of haemoglobin oxygenation. This property permits it to bind maximum quantity of oxygen at the respiratory organ and to deliver maximum at peripheral tissues.

With the rupture of salt bonds a pro­found change alter hemoglobin’s secondary, tertiary arid quaternary structures. One pair of α/β subunits rotate with respect to the other α/β pair, compacting the tetramer and increasing the affinity of the haemes for oxygens (Figs. 8.9 and 8.10). 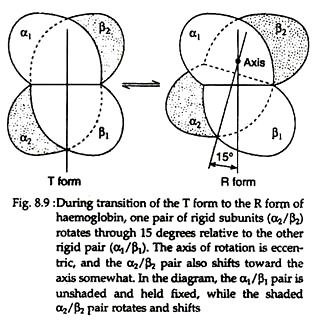 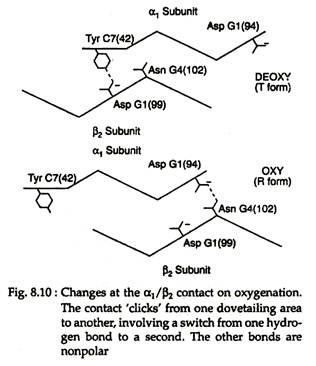 The quaternary structure of partially oxygenated haemoglobin is described as the T (taut) state and that of oxygenated haemo­globin (HbO2) as the R (relaxed) state (Fig. 8.11). 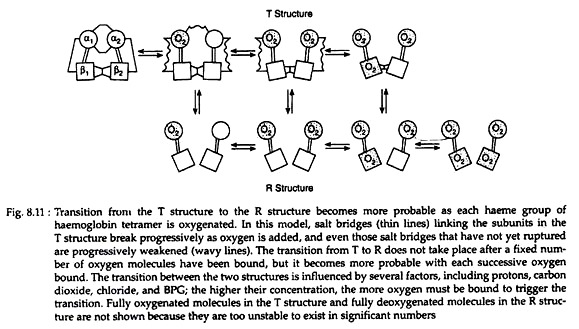 De-Oxygenation and Changes in Haemoglobin: Bohr and Haldane Effect:

Haemoglobin can bind with carbon dioxide (CO2) directly when oxygen is released from it. About 15% of the CO2 carried in blood, is carried directly by the haemoglobin molecule. CO2 reacts with the amino terminal a-amino groups of the haemoglobin, forming a carbamate and releasing protons that contribute to the Bohr Effect:

Conversion of the amino terminal from positive to a negative charge favours salt bridge formation between the α and β chains. At the lungs, oxygenation of haemoglobin is accompanied by expulsion and subsequent expiration of CO2. As CO2 is absorbed in blood, the carbonic anhydrase of erythrocytes catalyzes the formation of car­bonic acid:

Carbonic acid rapidly dissociates into bicarbonate and a proton. This proton tends to increase acidity of the blood. To avoid increasing acidity of blood, there is a buffe­ring system, which absorbs these excess protons. Haemoglobin binds two protons for every four oxygen molecules released and thus contributes significantly to the buffering capacity of blood (Fig. 8.12).

In the lungs, the process is reversed, i.e., as oxygen binds to deoxygenated haemo­globin, protons are released and combine with bicarbonate, forming carbonic acid. Carbonic anhydrase releases CO2 from carbo­nic acid for exhalation. Thus, the binding of oxygen forces the exhalation of CO2.

This reversible phenomenon is called the Bohr and Haldane effect. This effect is a property of tetrameric haemoglobin and is dependent upon its haeme-haeme interaction or coope­rative effects.

Chloride ions from the plasma enter the RBC when CO2 enters blood, while the base (Na) is left behind. When CO2 escapes from blood, chloride ions leave the cells; enter the plasma and combines with base sodium again. Due to this alternate movement of chloride ion, this phenomenon is called chlo­ride shift or Hamburger’s phenomenon (Fig. 8.13). 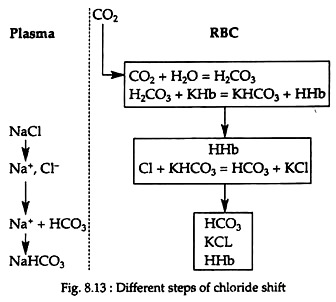 The membrane of the RBCs is not per­meable to basic ions (K+, Na+, etc.), but is permeable to anions (HCO–3, Cl−, etc.). When CO2 enters the blood stream in the tissue capi­llaries, very little H2CO3 is formed in plasma but largely in the RBCs, because red cells are rich in carbonic anhydrase which is absent in plasma. H2CO3 reacts with KHb in the RBC, producing KHCO3 and HHb.

Thus the bicar­bonate content of the RBC increases and thereby the reactions of the cells tend to become alkaline. To maintain a constant pH, the chloride ion (CI−) of NaCl from plasma enters the RBC and combines with KHCO3 forming KCl. The free HCO−3 ion now tends to make the cell reaction acidic.

This is pre­vented by the migration of HCO−3 from the RBC into the plasma. It combines with Na+ of NaCl, which is left free by the shift of chlo­ride and forms NaHCO3 in the plasma. All these changes take place in the tissue capi­llaries. Due to this reaction, large amount of Na+ of NaCl is made available for CO2 carriage.

In the lungs, these changes are reversed. Chloride comes out of the cells, reacts with NaHCO3 of plasma, forming NaCl and car­bonic acid. Carbonic acid thus liberated passes out through the lungs. In the tissue capillaries, chloride shifts from plasma to cells. Thereby, the osmotic pressure of the cell will rise, water will be drawn in and cell volume will increase. In the pulmonary capi­llaries, chloride shifts from the cells back to the plasma, and this will reduce the osmotic pressure of the cell and the cell will shrink.