Learn about the comparison of respiratory system in various Arthropods.

1. The respiratory organs consist of the lin­ing membrane of the bran- chiostegite, three pairs of epipodites and eight pairs of gills. The gills are lod­ged in gill chambers, which communicate with the exterior along its anterior, posterior and ventral borders.

2. The gills are cre­scent-shaped and increase in size anteroposteriorly. The first gill is smallest and the last one is the lar­gest. From their point of origin, the first gill is podobranch being atta­ched to the coxa of the second maxilliped, the 2nd and 3rd are arthrobranchs being attached to the membrane articu­lating the 3rd maxilliped with the body and the last five are pleurobranchs being attached to the body above the articulation of the walking legs.

3. Each gill consists of a long, narrow rachis supporting two rows of rhomboidal gill-plates diverging from each other at right angles to the elongated axis. The gill-plates are larger in size in the middle but smaller towards the ends. Each gill-plate is made up of a double layer of cuti­cle with a single layer of cells in between. The gill is attached to the body about the middle of its length, and is highly vascular.

4. The axis of the gill is roughly triangular in cross section. Three lon­gitudinal canals, two laterals and one median, run along the axis. The laterals are connected with each other by trans­verse channels and also with the median canal by marginal channels. Blood enters through the trans­verse channels and tra­verses other channels. Gaseous exchange takes places in the gill fila­ments.

5. The lining mem­brane of the branchio-stegite and the epipodites of the 3 maxillipeds are highly vascular and aid in the process of respiration.

6. The movements of scaphognathites maintain a constant backward to forward water current in the gill-chambers. The blood in the respiratory organs gives up CO2 and absorbs O2.

1. The respiratory organs consist of tracheae or air tubes and their branches or tracheoles which are directly communicat­ed with the exterior.

2. The tracheae open to the exterior by ten pairs of apertures, the spiracles or stigmata. Two are placed on each side of the thorax; one between pro- and meso- thorax and the other between meso- and meta- thorax. Eight occur on each side of the abdomen between terga and sterna of the first eight segments.

The stigmata are guarded by hairs, etc., to prevent the entrance of harmful particles. Each spiracle is controlled by muscular valves. From each spiracle leads inward a small tube which ends in a stout trachea and all of them are connected by longitu­dinal and transverse tracheae.

3. There are two lateral longitudinal tra­cheal trunks, one on each side of the body. They are connected by several transverse tracheae, and the tracheae form a system of intercommuni­cating network. Each tra­chea divides and subdivi­des into numerous bran­ches and the ultimate, very fine branches enter­ing the organs are called tracheoles. The tracheoles end in tissues. The wall of the trachea is strengthened by chitinoid lining in the form of spiral threads.

6. The alternate expan­sion and contraction of the abdomen brings inha­lation and exhalation of air in the tracheal system. The opening and closing of the spiracles are also dependent on the CO2 concentration of the inhaled air. The walls of the tracheoles allow gase­ous exchange and diffu­sion takes place between the cell sap and the lumen of the tube. The tissues get direct supply of oxygen.

2. The book-lungs open to the exterior by four pairs of apertures, the stigmata. Sternum of each of the 3rd, 4th, 5th and 6th preabdominal segments bears a pair of stigmata on its lateral sides. These are narrow oblique slits. Each stigmata opens directly into a book-lung and they are not interconnected.

3. Each book-lung is a compressed sac lined with a thin cuticle. The lining mem­brane is folded up into numerous delicate laminae lying parallel to one another like the pages of a book, rou­ghly 130-150 in number.

4. Deoxygenated blood flows through the narrow space in each lamina, separa­ted from the air only by the membranous walls of the lamina.

6. The alternate expan­sion and contraction of the abdomen brings inhalation and exhalation of air in the book-lungs. Gaseous exchange takes place bet­ween the blood in the lami­nae and the air in between the laminae. 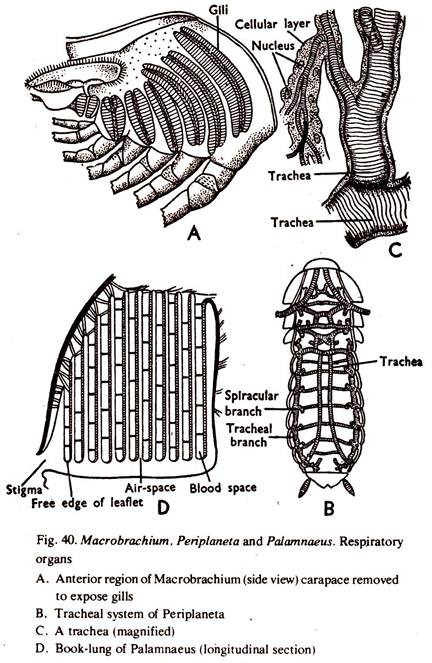