In this article we will discuss about the Placenta:- 1. Meaning of Placenta 2. Types of Embryonic Tissues Involved in Placentation 3. Function.

In mammals although the fertilized ovum develops in the body of the mother, the extra embryonic membranes are formed in similar fashion like that of the birds. The extra-embryonic somatopleure contributes to the formation of amnion and chorion while the splanchnopleure forms the yolk sac and allantois.

The allantois grows out of the hindgut of the embryo and expands into the extra-embryonic coelom. It later fuses with the chorion. Although no yolk is present in the mammalian ovum, the yolk sac is esta­blished in a similar manner like that of the birds. However, with the enlargement of the allantois, the yolk sac rapidly declines and becomes a shriveled remnant.

At the same time, the endometrium of the mother’s uterus has nearly completed its preparation to receive the embryo. The uter­ine stromal cells undergo a pronounced transformation where its cytoplasm becomes filled with glycogen and lipid droplets. These transformed stromal cells are called decidual cells. The endometrium containing these cells will contribute to the formation of an entity called placenta.

The word placenta is derived from a Greek word meaning a “flat cake”. Placenta may be defined as a temporary structure formed by the association or fusion between the extra-embryonic membranes of the foetus and the endometrium of mother for the pur­pose of physiological exchange of materials.

Therefore, the placenta from its origin point of view consists of two parts a foetal placen­ta furnished by the extra-embryonic mem­branes and a maternal placenta contributed by the uterine endometrium. The method of formation and fusion of the foetal placenta to the uterine wall is called placentation.

From the maternal side only a single component, the endometrium, is involved, but from the foetal side there are four prospective elements — amnion, chorion, yolk sac and allantois. The amnion, being the inner most membrane, does not directly con­tribute to the making of the placenta.

The chorion because of its external position is the membrane that makes immediate contact with the endometrium. The chorion (as seen in the chick embryo) plays its role by way of a vascular supply. In mammals there are two possible sources of chorionic vascularization — the vitelline circulation provided by the yolk sac and the allantoic circulation provi­ded by the allantois.

In mammals, depending upon the types of embryonic tissues involved in placenta­tion, there exists two basic types of placenta, which are related to the two different sources of chorionic vascularization.

They are as follows:

In some mammals, particularly in most marsupials (Didelphys, Macropus), the allan­tois remains relatively small and never makes contact with the chorion. The yolk sac on the other hand becomes very large and fuses with the chorion (Fig. 5.50).

In these mammals the chorion receives its blood sup­ply from the yolk sac (vitelline circulation) and the placenta is thus called chori­ovitelline placenta. In marsupials, although only a portion of the yolk sac (and thus the chorion) is provided with vascular meso­derm (Fig. 5.50), it is still referred to as yolk- sac placenta. The chorion, however, never advances beyond a smooth membrane, applied closely with the endometrium. 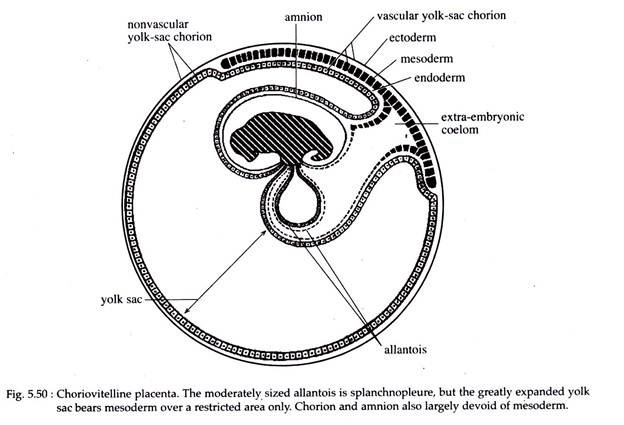 Among eutherian mammals, many car­nivores, rodents and insectivores, a similar type of placenta may exist either temporari­ly or permanently. In those where the yolk sac placenta exists temporarily, the yolk sac provides the initial vascular supply.

It then gradually regresses, while the developing allantois reaches the chorion and vascula­rizes it. In the other type the yolk sac shares with the allantois the task of vascularizing the chorion.

In most eutherian mammals and in some marsupials (Parameles, Dasyurus), the yolk sac remains rudimentary, while the allantois becomes well developed, fuses with the chorion and provides the chorionic circulation. This type of foetal placenta is called chorioallantoic placenta (Fig. 5.51). Here the chorion possesses finger-like vascular pro­cesses, the villi, which grows out into the adjacent maternal tissue. 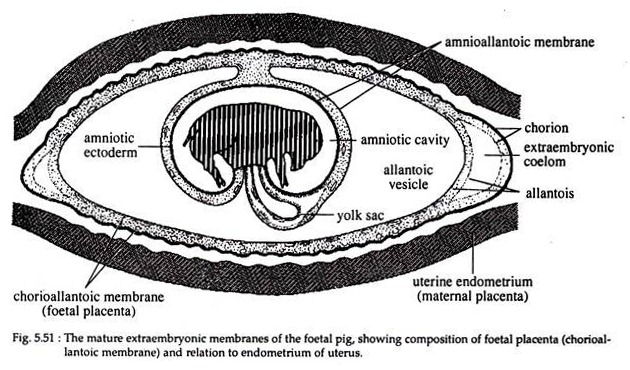 Histologically the placenta consists of barriers that prevent the blending of blood of the foetus and mother. From the maternal side the blood, enters into the inter-villous spaces or crypts through about 30 spiral arteries and at high pressure.

The arterial blood rich in oxygen, nutrients etc. passes over the villi in small fountain like streams and then under reduced pressure settles down at the maternal base of the placental compartment from where it is removed by open-ended uterine veins (Fig. 5.56). 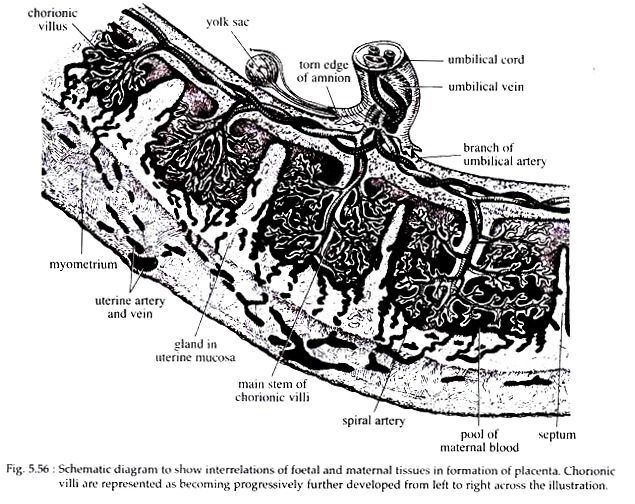 On the foetal side blood enters the villi through the branches of umbilical arteries. Although arte­rial, the blood is poor in oxygen and high in carbon-dioxide and other waste products. The foetal vessels at the terminal end of the villi form capillary network and at this region bulk of the placental exchange (Fig. 5.57) takes place. The blood now richer, is placental villus drained back to the foetus via the umbilical vein. 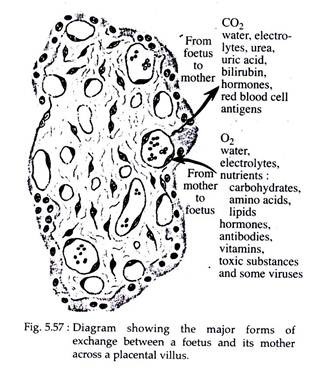 Exchange of substances from one blood stream to the other, takes place by various transfer mechanisms such as:

The functions of placenta are many fold and are as follows:

Placenta serves as adhe­sion or anchorage of the developing embryo with the uterine wall.

The foetus gets its nutrition from the maternal blood. Monosaccharide’s, lipids, amino acids, vita- mines and hormones pass by diffusion or active transport. Macromolecules of polysac­charides, lipids and proteins are absorbed by the trophoblast cells by pinocytosis. Water and electrolytes such as chlorides and phos­phates of sodium, potassium and magnesium pass by diffusion from mother to foetus.

Gaseous exchange takes place by diffusion across the foetal membrane. Oxygen diffuses from maternal blood into the foetal blood, while reverse dif­fusion takes place in case of carbon dioxide.

Waste products like urea, uric acid and creatinine are eliminated via placenta, from the embryonic blood to the maternal blood stream by diffusion. The kid­ney of mother removes these wastes of foetal metabolism along with her own waste pro­ducts.

Glycogen, fats and some inorganic salts are stored in the placenta to be utilized when diet of the foetus is inadequate.

Placenta produces various enzymes such as diamine oxidase, oxytocinase and phospholipase-A2, which protects the foetus.

Placenta acts temporarily as an endocrine organ. It secretes many hormones such as estradiol, proges­terone, chorionic gonadotropin in most mammals and also placental lactogen in human female. In some animals, such as rabbit, human females etc., the placenta is a significant source of relaxin, that relaxes the pelvic liga­ments to facilitate child birth.

Placenta acts as a barrier against the transportation of microbes into the embryo. However, antibo­dies which have developed in the blood of a mother who has acquired immunity against certain diseases like diphtheria, scarlet fever, small pox and measles are passed on to the foetus, who become passively immunized to these illness in the first period after birth.

Thus, the drug thalidomide, taken as a sedative by ladies during early pregnancy, is found to be a ter­atogen (i.e., it causes deformities in limb development, perforation of anus and deve­lopment of a defective heart). Children born to such mothers have flipper-like limbs and are called thalidomide babies.