In some land invertebrates and some aquatic invertebrates and vertebrates, respi­ratory structures to use atmospheric oxygen developed. These are tracheae, book-lung in arthropods, pulmonary sac in prosobranch and lung in pulmonate molluscs and acces­sory respiratory organs in fishes.

Unlike other terrestrial animals, the cells of insects obtain their oxygen supply directly from the air through a series of branching tubes,, the tracheae and tracheoles. A trachea is communicated to the exterior through an opening, the stigmata or spiracle. The other end is branched repeatedly and the trache­oles — less than 1 µm in diameter, open directly in the tissue fluid (Fig. 9.7). 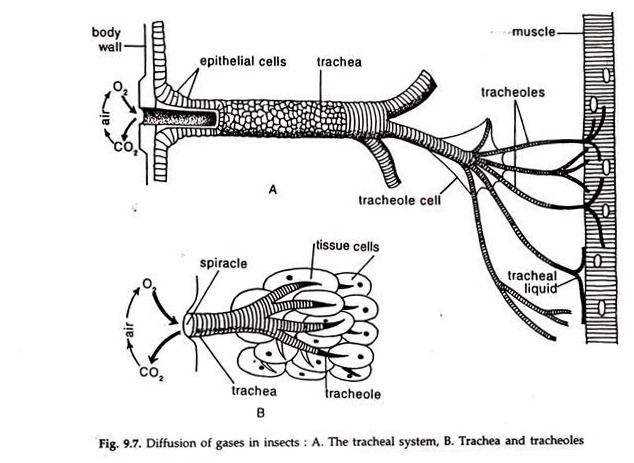 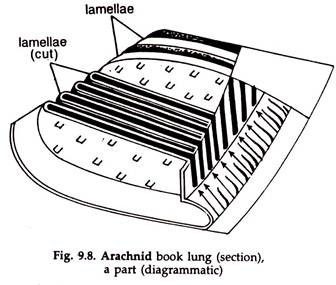 Molluscs are primarily gill breathers. In some amphibian prosobranchs, a part of the mantle has been vascularized to form a pul­monary sac, where gas exchange occurs. This is an adaptation to use atmospheric oxygen in respiration to tide over deficiency of dis­solved oxygen in water and also to meet the need of respiratory oxygen when out of water or in aestivation.

The pulmonary sac commu­nicates with the exterior. Air is sucked in through the expanded left siphon and ex­pelled through the opening of the sac. The sac may be considered, at best, as an accessory respiratory structure.

The gills are primary respiratory struc­tures in fishes. The accessory respiratory or­gans, capable to make use of oxygen in the air, have developed in some bony fishes, pro­bably in response to low oxygen tension in the water body in which they lived, to supple­ment gill respiration to a certain extent.

The structures are paired, highly vascular, in as­sociation with the gills and lodged in gill chambers in most cases (Fig. 9.9). These fishes are unable to survive if they are denied access to air breathing and also out of water. The fish moves up and, at a level just below the water surface, expels through the mouth, the air engulfed previously. It lifts the mouth above water level, gulps a mouthful of air and swims downward. 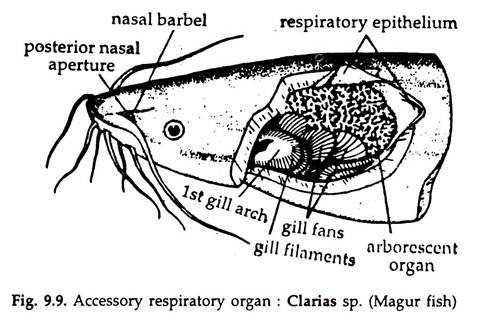 Lung possibly first evolved in swamp-dwelling fishes that lived in water, where oxygen tension was low. Dipnoi, the lung fishes, use both gills and lungs, the latter predominating. Protopterus and Lepidosiren survive on lung respiration during aestivation in summer, when water dries up.

Neoceratodus is unable to live out of water. The lungs of dipnoans resemble tetrapod lungs to great extent; nostrils help in respiration; glottis, trachea and lung alveoli are present. Unlike tetrapod lungs they are situated ventrally.

Since the air moves in and out of the lungs by a pumping action in vertebrates, they are called ventilation lungs. Lungs are highly vascularized, paired structures located in the thorax. The lungs develop as bi-lobed outgrowths from the floor of the pharynx and extend backward.

In higher forms the buccal cavity is in communication with the larynx through the glottis. The larynx opens in the trachea, the trachea divides into two bronchi, entering the lungs. The lungs are somewhat spongy, elastic structures.

The bronchi branch profusely to form lungs. With the progress in branching, the walls become thinner and each branch finally ends in a small, oval, extremely thin walled sac, the alveolus (L. alveolus = small cavity). The alveoli are closely packed, with a dense capillary bed between them (Fig. 9.10). 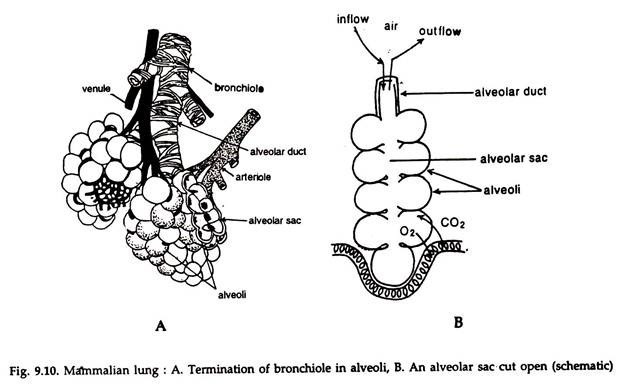 Gas exchange takes place all through between the capillaries and the alveoli (Fig. 9.11). Endotherms have larger gas exchange surface than the exotherms. 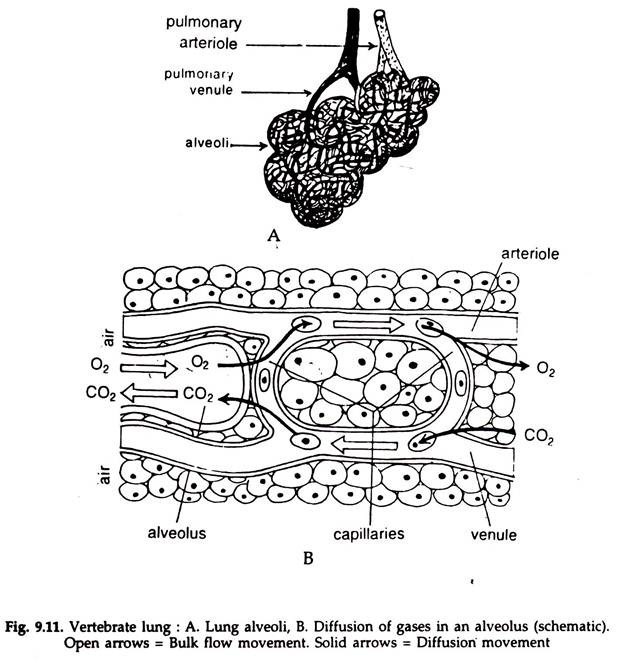 On the average, the lung volume in mam­mals is about 6 per cent of the total body volume. Lung ventilation in vertebrates is effected by changing the volume of the thoracic cav­ity. In mammals the thoracic cavity is bounded by the ribs on the sides and by the diaphragm towards the abdomen.

In inspiration, con­traction of external intercostal muscles pulls the ribs up and out, the muscular diaphragm contracts and flattens and the chest expands. The intrapulmonary pressure falls by 1 mm Hg and the air is sucked into the lungs through trachea.

The capacity of an adult human lungs is about 6 litres. The tidal volume or the vol­ume of air. moving in and out with a single breath is about 0.5 L at rest. The total breath­ing capacity, i.e., the amount of air that can be expelled after the lungs filled in capacity, is about 4 L. This is known as vital capacity. The vital capacity is usually higher in man than that in woman. Athletes have still higher capacity, 5 to 6 L or more.

During expiration, inspiratory muscles relax, the elastic lungs recoil, the intra­pulmonary pressure increases and the air is forced out. In all vertebrates the inspiration is passive and expiration is active. In an average human male, the gas ex­change surface is 70 m2.

Since the major constituent of air is inert nitrogen, the weight of the air to be moved through the lungs in respiration is about 5.0 times the weight of the available oxygen. About 25 per cent of oxygen is extracted by mammals from the air present in the lungs.

All the lung alveoli do not collapse in respiratory movement and a certain amount of residual air, about 1.5 L, is always left in the lungs. This is called re­sidual volume, which varies in quiet and fast breathing.

For this the lungs never con­tain fresh air as the air inhaled gets mixed with air already present in the lungs. The oxygen content of the mixture is in equilib­rium with the blood. At rest, in human, about 10 L air is- taken into the lungs per minute. In heavy exercise the amount may reach 125 L.